Richmond’s triple premiership defender David Astbury will play his last game for the Tigers this weekend after announcing his retirement.

Astbury, a mainstay of Richmond’s defence, told his teammates of his decision to retire on Tuesday and will line up in defence for his last game against the Hawks, who will be sending off four-time premiership coach Alastair Clarkson and 400-gamer Shaun Burgoyne on Saturday. 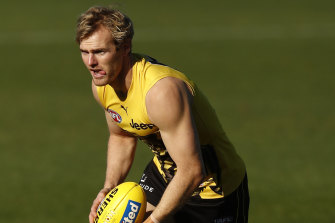 Astbury, 30, played an important role in Richmond’s three flags, the only tall defender to play in all three premierships of 2017, 2019 and 2020. His experience and capacity to play on opposition key forwards became even more pronounced in 2019 when champion defender Alex Rance went down with a season-ending knee injury.

Club sources said Astbury felt ready to move on after a dozen seasons with the Tigers, who are looking to transition their list as older players enter the twilight of their careers.

“It really is a dream to be completely content with what my career consists of and be really proud of that,” said Astbury, who played 154 games.

“I am really humbled by the football club wanting to keep me around, but I know this decision is right for me and for the club going forward.

“I am so proud that I have fulfilled my career and my dream at one club, this club.”

Astbury was restricted to just nine games in the truncated 17-round 2020 season, but returned for the final home-and-away game and played a significant role in Richmond’s successful finals campaign, his presence assisting talented young tall defender Noah Balta’s progression.

Astbury, drafted with pick 35 from North Ballarat in the 2009 national draft – the same draft in which Dustin Martin was selected at pick No.3 – was a cornerstone of the Tigers’ accomplished defence, working alongside stars Dylan Grimes and Nick Vlastuin, as well as Rance, Nathan Broad and Bachar Houli.

He at one point contemplated a trade to the Brisbane Lions, but opted to remain with Richmond, a decision that greatly benefited he and the club.

Meanwhile, Carlton announced on Tuesday that Levi Casboult would not be offered a contract next season. The 31-year-old has played more than 150 games with the Blues.

“The opportunity to call Carlton home and live out my boyhood dream over the past 12 years has been incredible,” Casboult said.

“To be departing the club with life Membership and after reaching the 150-game milestone earlier this year, is something I am incredibly proud of and am honoured to have been able to achieve.

“So many people at this football club have shown faith in me over the course of my career and I am extremely grateful for the support I have received, both internally from a staffing and player point of view, and externally from my family, friends and all Carlton members and supporters.”