The unthinkable has happened; the NSW Waratahs have finished Super Rugby AU without a win.

NSW are yet to wake up from their nightmare, with Saturday night’s 36-25 loss to the Melbourne Rebels putting the final nail in the coffin of a 10-week block Waratahs fans won’t ever want to revisit. 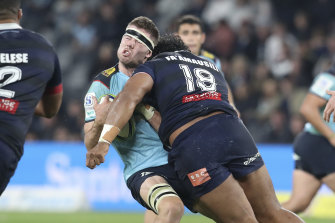 Max Douglas takes the full force of a tackle from Pone Fa’amausili.Credit:Getty

The Waratahs trailed 18-6 but refused to go away. Their effort cannot be questioned – even as they chased late tries and had favourable field position – yet they lack execution and haven’t got their basic skills up to the same standard of other Australian teams.

The Rebels, also out of finals contention, dug deep following a first half red card to Isi Naisarani and played well, with back-rower Richard Hardwick a standout.

Rebels prop Pone Fa’amausili was also red-carded, for a high shot, with the result all but wrapped up. He could consider himself unlucky.

NSW are now one loss away from equalling the franchise’s worst run of nine defeats on the trot.

Every team in Super Rugby AU – the Brumbies, Reds, Force and Rebels – managed to knock off NSW twice. Who would have thought?

If the Waratahs come up short in every Super Rugby Trans-tasman fixture, they will take the record for the longest losing streak of any Australian side in history.

The NSW board pulled the trigger last month by sacking Rob Penney but despite a couple of better showings, the Waratahs are in one of the all-time ruts.

Now would be the perfect time to start again but there isn’t a minute to waste with matches against Kiwi sides three weeks away.

Penney was a scapegoat and others in important positions need to take greater accountability for a disastrous campaign.

It is probably more demoralising that NSW have been well in the contest in their past three matches.

Rebels coach David Wessels, labelled a “dead man walking” this week by Tim Horan, would have been shattered by Friday’s result, which saw the Western Force sneak into a qualifying final courtesy of their narrow win over the Queensland Reds.

While this was a dead rubber, a big win could have gone a long way towards giving the Rebels board no choice but to put a contract extension on the table for Wessels, whose win rate across four seasons is 44 per cent.

It will be an interesting few weeks at Rebels headquarters following an underwhelming fourth-place finish.

A 15-6 advantage for the Rebels suddenly didn’t look as rosy when Naisarani was shown a red card for a high shot on Max Douglas.

Lachie Swinton, always the aggressor, got into a scuffle with Naisarani who then threw a few punches that missed their target. Lucky you can’t get two red cards.

Cohesion is building at NSW, with Lalakai Foketi and Izaia Perese flourishing in the centres, while No.10 Ben Donaldson once again showed his game management is up to Super Rugby standard.

Donaldson’s best mate, Will Harrison, said pre-game he felt he might struggle to make it back into the matchday 23 once he recovers from injury.

Harrison will almost certainly be reinstated at five-eighth but Donaldson is mounting a tantalising case.

So too is Perese for a Wallabies jersey. His offload in the lead-up to Mark Nawaqanitawase’s 31st-minute try was all class.

Angus Bell was enormous for the Waratahs, making plenty of post-contact metres.

There just wasn’t enough gold across the board to overpower a physical Rebels side who made light work of a NSW outfit that is a work in progress.

NSW winger James Ramm suffered a dislocated shoulder and came from the field in the first half.

Ratten: Hill criticism had been unfair