Support for the grand final re-match opening each season came unexpectedly from Carlton coach Michael Voss, who said on Wednesday that he would like the fixture retained in future, even if it meant the Blues no longer opened the season.

Voss did have a proviso, though: that Carlton and Richmond keep the Thursday night slot of the first round.

The Melbourne-Western Bulldogs season-opener on Wednesday evening this year bumped what had become a modern tradition of opening the new season with Richmond and Carlton.

“I would like to keep our Thursday night whatever happens but I must admit, being able to open with the grand final, whether it’s just the premiers or the game itself, I think there is something good in that and we should look at in the program,” said Voss.

“But I will be selfish here and say I wouldn’t mind keeping the Thursday night game as well,” added the new Blues coach, ahead of his side’s first game against bogey side Richmond. 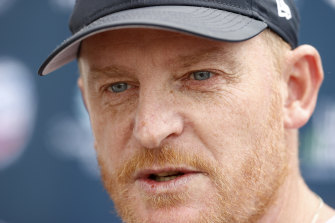 Carlton coach Michael Voss at training on Wednesday, ahead of the round one clash against Richmond.Credit:Getty Images

Richmond have won the 11 matches since. While the new coach does not carry the history of those losses, he inherits a team and club that is acutely aware of its bogey side. His captain Patrick Cripps, for instance, has never beaten Richmond.

“We need to own that part of the story and, it’s important that we own it because that’s where the lessons are learned,” Voss said.

“It’s more about what we are doing and how we want to play. We understand that there’s a past there, there’s been a history, but [our approach] has been so much about what we want to be able to do now and what we stand for moving forward.”

Consequently, when asked about Richmond and the injuries the Tigers had and any vulnerabilities, Voss was clipped with his reply, offering the sort of dead bat that would be welcome in on a Karachi deck: Richmond were a good team and would bring their best. 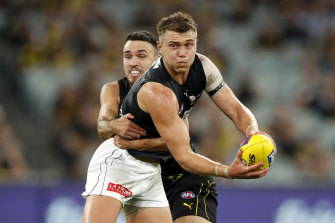 Carlton skipper Patrick Cripps has never played in a victory over Richmond.Credit:Getty Images

Voss said he felt no added anxiety or apprehension in his return to senior coaching. His experience of being the AFL’s best footballer when he played, captain of a three-peat premiership team, a senior coach at Brisbane and then a long-term assistant under Ken Hinkley at Port Adelaide, left him comfortable with pre-game nerves.

“In some ways where your belief comes from, or that experience comes from, is you have belief in the work you have put in. We have spent a considerable amount of time with the players over the last five months,” Voss said.

Carlton had a good off-season. They brought in a new coaching regime and they added Adam Cerra and George Hewett, they have Charlie Curnow fully fit and they beat the reigning premiers in a scratch match.

They lost Sam Walsh to injury for the first round at least and then Liam Jones retired over the vaccination requirement, but overwhelmingly it has been a successful off-season.

The excitement for Voss was that, to date, there had been evidence that what they had been training towards could be seen on the field when they played an opponent. Playing Richmond is another step up.

“I want to see some transfer in the way that we’ve tried to play,” Voss said.

“But as far as expectations go, I just want to make sure that we stay together as a group right throughout the whole game and that we play for each other.

“I know if we can bring that spirit we put ourselves in contention in the game. If we do that then we get a look at the end and we’ll be happy.”

The moments of the greatest animation came when he discussed former captain Sam Docherty being back in the side for round one after his secondary cancer treatment.

“It’s a great story. He’s been inspirational for us as a footy team and footy club. The fact he is rolling out round one is testament to his resilience as a person and we take great encouragement from that

“It does feel right that he is out there with us.”