The NRL will consider launching a Pride round as soon as next year despite the threat of the issue dividing the game in the same way it has split the Sea Eagles.

Manly will press ahead with plans to wear rainbow-themed jerseys to promote inclusivity despite seven Sea Eagles players boycotting their clash against the Roosters over the matter. The issue was the biggest talking point at a breakfast at Sydney’s Sofitel Wentworth hotel held to promote the NRL’s Women in League round.

Despite the fallout from Manly’s ‘Everyone in League’ jersey, ARLC chairman Peter V’landys said he was open to launching a game-wide Pride round as soon as 2023.

“Absolutely. We are very proud that we are a game for everybody,” V’landys said on Tuesday.

“That’s why I’m in this game, because I had a difficulty being accepted as a migrant and rugby league accepted me.

“It was inclusive back then and it is inclusive now. It’s important that every boy and girl and man and woman can go to the game and feel they can be treated the same as everyone else.” 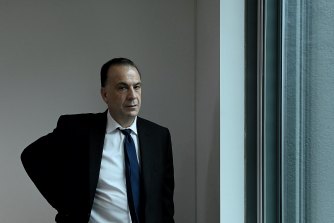 Pressed on whether the initiative was a genuine chance of being introduced, V’landys said: “Absolutely. As I said, we are the greatest game for all; not just for a select few, but for all. We recognise those people, absolutely. I have no problem with that.”

The club will forge ahead with plans for players to wear the new strip for their home clash on Thursday and those who feel uncomfortable doing have been granted permission not to participate.

Asked if a game-wide Pride round would have similar ramifications for the game, V’landys said: “As I said, we have freedoms and we have policies. 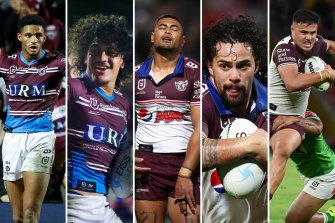 Jason Saab, Christian Tuipulotu, Haumole Olakau’atu, Josh Aloiai and Josh Schuster are five of the seven Manly players who have withdrawn from Thursday’s clash with the Roosters.Credit:Getty/NRL Photos

“Every player that plays the game is aware of our policies. If they want to take that stance, then so be it. We are not ever going to take a backwards step in the inclusive policy we have.”

Speaking earlier on Tuesday morning during the official Women in League function, V’landys said: “In my view, we’re all the same. We should recognise that. However, I do respect the Manly players’ right to freedom.

“One of the things I love about Australia is we have this freedom. We don’t live in Russia. It doesn’t matter who you are, we are treated equally. We’re not going to back away from that, but at the same time we respect the players’ position. Our policy, and it doesn’t matter who you are, I hope they change their minds because that is the beauty of rugby league – it is the greatest game for all.

The Rugby League Players Association said it supported all initiatives that celebrate diversity, but there had been a “communication breakdown” in its implementation at Manly.

“It’s not about choosing sides,” the RLPA said in a statement.

“As the players’ association we were aware of the situation on Monday, but our understanding was that it was still being worked through between players and the Manly club as an employer and employee matter. We welcome clubs and players coming together to respectfully work through their differing viewpoints.

“Unfortunately, when it came to this initiative, it’s clear there had been a communication breakdown between the decision makers at the club and the broader playing group. We would have hoped there had been a process between players, club and other stakeholders that was worked through and everyone’s views could be safely heard.

“As the representatives of a diverse group of people, we recognise the value of respecting and prioritising confidentiality, consultation and collaboration. Continuing to take this approach has helped us create safe and professional workplaces where we can make improvements together with respect and acceptance.

“Our hope is this will now become an opportunity to learn, to keep making progress as a game, and take great strides together to make sure no one is left behind.”