Home » Rugby » ‘We’re not building a house of straw’: Bennett calls for patience as Dolphins struggle to lure stars

It has been 50 days since the ARL Commission officially granted the NRL’s 17th licence to the Dolphins. Since then, the newcomers have been linked to a string of big names, including Brandon Smith, Reed Mahoney, Christian Welch, Tino Fa’asuamaleaui, Patrick Carrigan and Siosiua Taukeiaho, who have all secured their futures elsewhere.

Privately, the Dolphins believe some of the stars linked to them have used the club as leverage to get more money elsewhere. In the case of Smith, it has been widely reported that the Storm hooker indicated he was set to join, only to sign with the Roosters instead.

While Bennett conceded he would have liked to have signed a few more players by now, the seven-time premiership-winning coach said there was still plenty of time to assemble a strong roster.

“There’s a word called patience and we can’t just talk it, we have to live it at the moment,” Bennett told The Sun-Herald. “We’ll just be patient. We’re not building a team for one season, we’re building a team for a lifetime. It’s important that all the decisions are made for the right reasons. That’s being patient, that’s being vision making.

“There’s a lot of water to flow under the bridge yet. 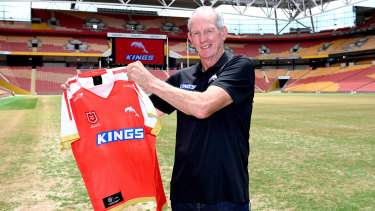 Wayne Bennett with the new jersey to be worn by the Dolphins.Credit:Getty

“Coaches will get disgruntled with players throughout the season, that type of stuff. There’s another off-season in front of us. I’m not fazed.”

There’s a recruitment philosophy that Bennett has always adhered to: that it’s better to miss out on a player than to pay too much. It’s one he used when he built the Brisbane Broncos from the ground up and one that he will again apply to his latest task.

“We’ve got a lot of irons in the fire,” he said. “It will come together every day as we get closer to another signature, another player. Nobody is disappointed.

“There will be fallout through the season and there’s an off-season still in front of us. I’m confident we’ll have a quality football team.

“I’m just pleased that [ARLC chairman] Peter [V’landys] knew what he was doing. He didn’t bring two teams in because it would have made it much more difficult. This is the way to do it, with one.

“I was always confident about [there being enough quality players].

“The 17th team, regardless of who it was or where it came from, I was always comfortable that would happen.

“The other challenge for us is we don’t have players signed. The players know who will be coaching them, but they don’t know who they are going to be playing with.”

Only one player has signed so far, Kaufusi. Bennett couldn’t be more effusive in his praise for the Storm, Maroons and Kangaroos forward, revealing he is every chance of being the inaugural Dolphins skipper.

“He will be my favourite player, to be honest with you,” Bennett said.

“He made the decision when no one else was signed. He didn’t look over his shoulder to see who else is coming or what else is going on. He said, ‘I’m going and I’m going to make the team as successful as any team I’ve been in’. I’ve got no doubt about that.”

Asked if Kaufusi was captaincy material, Bennett said: “Yeah, without [doubt]. I just loved his attitude. He’s the type of player that I need with young men. He’s got a come-with-me type attitude. You can’t pay enough for that type of bloke. He was chasing an opportunity closer to home and I loved his honesty and his intent.”

The Dolphins, who have been jockeying with the other 16 clubs for talent since November 1, are yet to announce a second major signing. However, they are confident they will have some good news to trumpet soon, potentially before Christmas.

“You’re always going to have minor setbacks along the way, but when you’ve been involved in football as long as I have, you understand there’s another one out there if you give them an opportunity,” he said.

“We’ve got a lot of irons in the fire … it’s important that all the decisions are made for the right reasons.”

“I didn’t do that at the Broncos, I’m not going to do that at the Dolphins. There’s no pressure on me … [the people in charge] understand it all, they’ve been rugby league people all their life. They just want what I want: the best players available and us doing our best.”

Asked what his message is for Dolphins fans, Bennett replied: “Believe in us, we know what we’re doing. Look at the people there, we’re all experienced, we all know the game. We’ve got a lot of people working in the NRL before with us. We’ve just all got to be patient.”

Dolphins chief executive Terry Reader echoed Bennett’s sentiments, assuring fans there was no need to be impatient despite still having 29 roster spots to fill.

“We’re really comfortable with where things are at,” Reader said. “It’s only been 50 days since we were awarded the license and there are a lot of negotiations happening in the background.

“Some of the stuff that’s been reported, in a lot of cases, has been fictitious about some of the players we’ve been in contact with. We’re a year out from pre-season, 15 months out from our first game, and we’re comfortable with where things are at at the moment.”

‘Rally behind him’: McGuire backs Korda as Pies president

Team of the week: The best of Premiership and Super Rugby combined

‘The jersey is Boyd’s’: Crichton just wants to do No.11 role justice