Home » Rugby » ‘We’ve got a big issue with it’: Swain cited for tackle that angered All Blacks

Wallabies second-rower Darcy Swain was slammed by All Blacks coach Ian Foster after New Zealand’s 39-37 win over Australia and could face another stint on the sidelines after being cited for a dangerous clean-out.

Swain’s availability for the second Bledisloe Test in Auckland next Saturday looks uncertain, with the 25-year-old set to face a SANZAAR judiciary hearing on Monday.

In the 35th minute of Thursday’s first Bledisloe clash, Swain was yellow-carded by French referee Mathieu Raynal for a clean-out on Quinn Tupaea.

The All Blacks reserve was in visible discomfort and had to leave the field.

Foster said on Friday Tupaea had partially ruptured his ACL and would be sidelined for two to three months.

SANZAAR announced on Friday afternoon that Swain’s hit – in its opinion – had met the red card threshold and confirmed he would have to front a foul play review committee on Monday. 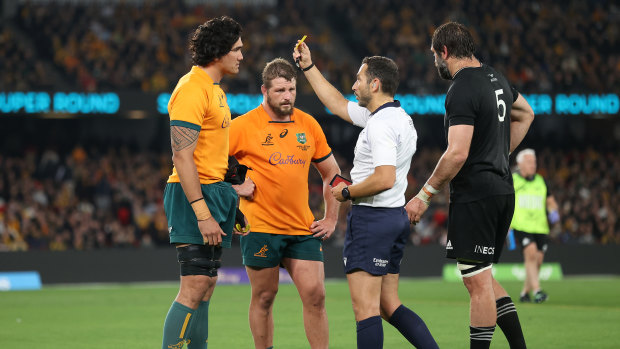 Darcy Swain is shown a yellow card for a dangerous tackle on Quinn Tupaea.Credit:Getty

A SANZAAR statement read: “Swain is alleged to have contravened Law 9.11: ‘Players must not do anything that is reckless and dangerous to others’, during the match between Australia and New Zealand at Marvel Stadium in Melbourne.”

Foster was not pleased when quizzed about the tackle.

“We’ve got a big issue with it,” Foster said. “We’ve got a player who is probably going to be out for [a long period]. You’re not allowed to target legs on the side of the clean-out past the ball. The rules are pretty clear.”

Wallabies coach Dave Rennie defended Swain, perhaps in a bid to get his second-rower the best chance of a reprieve at the judiciary.

“I’m not convinced about Darcy’s [yellow card],” Rennie said. “It was certainly nothing intentional. Ironically, he got neck-rolled prior to him cleaning out, but that wasn’t picked up.”

It is the second time this year Swain has been cited. The first was for a headbutt in the opening Test of the England series in July, which saw Swain suspended for two weeks.

The Wallabies could also be without captain James Slipper, who suffered a calf injury.

“I’ll have to get it scanned,” said Slipper, who felt a tweak 10 minutes into the match but played until half-time. “I’d love to play.”

The Wallabies returned to Queensland on Friday to begin preparations for the Auckland fixture.

Although the Bledisloe Cup is gone for another year, motivation is high to get one back over the Kiwis after the dramatic end to Thursday’s match.

“We’ll lick our wounds,” Rennie said. “We can certainly take confidence from that [performance] but you’ve got to back that up.

“It would’ve been nice to go to Auckland with the chance of coming away with some silverware but that’s not the case, unfortunately. It’s still a big game for us and we’ll front up.”

Watch every match of The Rugby Championship on the Home of Rugby, Stan Sport. All streaming ad-free, live and on demand.