Home » Rugby » What exactly were the Dragons celebrating at Paul Vaughan’s barbecue?

When Dragons players gathered at Paul Vaughan’s Shellharbour home on Saturday afternoon, walking up the stairs with slabs of Golden Gatorades on their shoulders ready to rip right in, what exactly were they drinking to?

Their golden point win over the 12th-placed Warriors, which resembled a boxing match between two over-aged heavyweight boxers who couldn’t land the knockout blow? 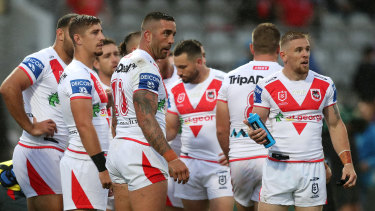 The Dragons had just scraped past the Warriors before Paul Vaughan’s ill-fated house party… so what exactly were they celebrating?Credit:NRL Photos

Corey Norman and Matt Dufty had plenty of reason to celebrate. They’re off contract and who would touch them?

Then there’s Jack de Belin, who is a free man and can do whatever he wants. I mean, what does he owe the Dragons, the club that stood by him for two-and-a-half years when others would have let him go?

As for Vaughan, he had as much reason as anyone to par-tay.

Two years ago, he was one of the best props in the competition, winning Origins with NSW and playing for Australia.

This year, his form has been so indifferent the Dragons were praying he didn’t trigger an option for another season in 2022. 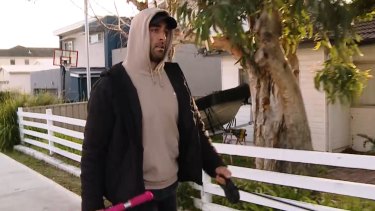 Paul Vaughan walking through his neighbourhood on Tuesday.Credit:Nine News

“We just wanted to enjoy each other’s company,” Vaughan said in an underwhelming mea culpa interview on Fox Sports.

In other words, they were celebrating this weekend’s bye. In the glory days of the Red V, they celebrated premierships.

The Dragons’ COVID party, which led to Vaughan being sacked and a further dozen players fined and suspended for one match, is symptomatic of a deeper issue.

Mediocrity and entitlement have been the standard at St George Illawarra for so long, from the board down, that the club no longer understands what success looks like.

While there are conflicting reports about what actually went down at Vaughny’s barbie, there’s one indisputable part of this story that shines a light on the attitude of some their players.

As confirmed by both the club and the NRL, coach Anthony Griffin and general manager of football Ben Harran explicitly told them in the dressing-room after the Warriors not to get their drink on last weekend.

It was against the law, for starters, and breached the NRL’s own level four biosecurity rules.

The players did it anyway.

It demonstrated something more than a lack of respect for Griffin and Harran. It was straight out betrayal. You have to feel sorry for both of them.

When Griffin was appointed coach late last year, he was hailed as a tough disciplinarian who would get rid of the soft underbelly developed under Paul McGregor.

The Dragons showed promise early this season but have been patchy at best since the victory over the Eels. The fact they are seventh on the ladder doesn’t show how far they’ve come. It exposes the weakness of this year’s competition.

Whether Griffin is the right man for the job remains to be seen, despite some of the wild commentary about the club already turning the corner in his first season.

Maybe the players have been reading too much of the coach’s glowing press because they are a long way from turning the corner. They aren’t in the same suburb as the corner.

What Griffin is surely coming to understand, through this episode alone, is the enormous job ahead of him.

A question for chairman Andrew Gordon and his fellow WIN Corporation appointees to the board. And for Peter Doust, whose fingers have been all over this club for years …

How did it get to this?

How did the Dragons go from winning the competition with Wayne Bennett and a bumper crop of local juniors – to settling for Anthony Griffin and a bunch of Broncos off-cuts?

How did the Dragons lose Tyson Frizell and Cameron McInnes – but went after Jarryd Hayne and Israel Folau?

Meanwhile, long-time supporters drift between anger and apathy, thinking back to those glory days we mentioned earlier.

Want to know a secret? The Dragons are celebrating their centenary this season.

St George played their first game in the NSWRL competition on April 23, 1921, against Glebe at the Sydney Sports Ground.

Now that is something to celebrate.

Instead, the Illawarra side of the joint venture pretty much wants nothing to do with festivities, even rejecting the idea of representing the milestone on the players’ jumpers.

That sums up the once-proud Dragons right there: they can’t even agree on how to celebrate their own birthday.

Instead of this year being remembered as a celebration of the club’s proud history, it will be remembered for the Weekend at Vaughny’s – an inexcusable set of events that trashed a club’s season, undermined a coach and celebrated a bye.

If there is a silver lining out of this godforsaken pandemic, it’s the brilliant news that State of Origin III will be played at McDonald Jones Stadium in Newcastle. How good.

On Tuesday night, though, there was great pessimism about it being held in NSW with the NRL set to move the match to AAMI Park in Melbourne or GIO Stadium in Canberra.

The NRL couldn’t get a firm answer out of the NSW government about capacity. In the end, 75 per cent of the stadium will be full.

If I know that city at all, it will be a Raging Festival of Rugby League not seen since the Johns boys crowd-surfed through Civic Park to the dulcet tones of the Screaming Jets two days after winning the 1997 grand final.

The Hunter has been a proverbial conveyer belt of talent over the past century or so with eight players named in the ARL’s official 100 greatest players in Australian premiership history.

It’s great reward for a region that’s stuck solid with rugby league through thick and thin.

When Andrew Johns was forced into retirement through injury, and he did an emotional lap of honour, the crowd didn’t chant his name. They chanted the name of their city …

Then there was Super League. Newcastle was the most important battleground of that ugly battle and it was a resounding win for the ARL.

When he penned his memoirs years later, ARL chairman Ken Arthurson acknowledged the support of the Newy faithful on the first page.

“I dedicate the book to the football fans of Newcastle whose unfailing strength and support and loyalty for the ARL cause gave me the strength to carry on during the bad times of seasons 1995-96,” he wrote. “In times of great uncertainty, they were the true believers.”

The quote
“Bullshit” – The response from a Palmer United Party spokesman when the Gold Coast Bulletin informed him of Israel Folau’s signing with Japanese rugby club NTT Communications. Then they sent him the press release. Sorry buddy, you’ve just been Folau’d.

Thumbs up
The Wallabies beat France 23-21 in their Test match at Suncorp Stadium on Wednesday night via a penalty goal from Noah Lolesio after the full-time siren in the 85th minute. Never in doubt.

Paul Vaughan: I’m an idiot for holding this COVID party. Jai Arrow: hold my beer. The Queensland forward has been fined, suspended, ruled out of Origin III, placed in isolation and unfollowed on Insta by his long-time girlfriend after breaching biosecurity rules by bringing a woman back to the team hotel.

It’s a big weekend for …
England and Italy as they go head-to-head in the Euro 2020 final. I know: it’s got England heartache written all over it. It’s OK, they’re used to it. Match starts at 5am on Monday (AEST).

It’s an even bigger weekend for …

Bleary-eyed Australians, as we watch the men’s and women’s finals at Wimbledon. It was unknown at the time of writing if Ash Barty had made it. If she hasn’t, may I suggest the fourth season of Seinfeld.