Home » Rugby » What Max King needs to do to terrify defenders

Max King has already proven to be a very good young footballer. But watching him live in his 50th game also highlighted there are still some steps he needs to take on the path to greatness.

It was during last week’s loss to the Brisbane Lions that I described his forward craft as more “schoolboy” than AFL. 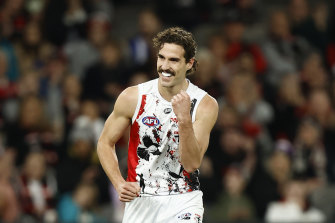 At his best, King can win a game off his own boot. When he gets a run and jump at the footy, he looks almost impossible to stop.

While he’s had some good – even great – quarters this season, understandably as a 21-year-old he’s lacking a level of consistency.

The Lions, for instance, denied him access to the footy. It meant, more often than not, King was calling for the ball out the back.

If the service wasn’t perfect, it allowed defenders to drop off, ensuring he was double or triple-teamed. It wasn’t so much Harris Andrews who beat King, but, at times, King beating himself. 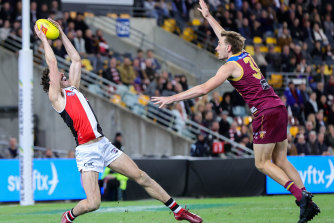 King takes a mark during the loss to the Brisbane Lions.Credit:AFL Photos

His two goals were both early, and both from free kicks.

He has the athletic ability to find space if he’s willing to work. Right now, though, he’s somewhat of a one-trick pony.

Obviously, the Saints would already be working closely with him, but, if I was Max, I’d be getting straight on the phone with the man who gave him his No.12, Nick Riewoldt.

Nick was as good as anyone at working over his opponent. Always watching the footy, it was just constant movement – left, right and back – that gave him the space he needed to run and launch.

Defenders hate that constant movement. Not only does it mean they’re challenged aerobically, but mentally as well.

There’s not as much fear factor about playing on Max or other key forwards that play in a similar way – at least in Max’s case, not yet.

Defenders wouldn’t be that concerned about him losing them through work rate or forward craft. He doesn’t panic you in that facet of the game.

When there’s a slow play it tests your footy IQ, as it’s the toughest marking contest you’ll encounter. But to get the footy where you want it, you often need to lead out of the space you eventually want to get the ball in, before doubling back into that space with quick movement.

It makes it more difficult for the defender, by ensuring you’re not caught under the footy and you get a run and jump at it.

It’s using the angles and, as it stands, King doesn’t have that play as part of his repertoire.

Maybe he’s being instructed by coach Brett Ratten to play in this predictable manner, allowing his small forwards to go to work around him.

But any set-up should, first and foremost, give the forward a chance of marking it.

He’s only young and has significant potential, but at the moment I liken his movement to Ben Brown during his time at North Melbourne. Brown managed to kick 60 goals a season over three years but eventually got worked out.

When you’re the focal point of your team’s attack, the opposition puts time into you. 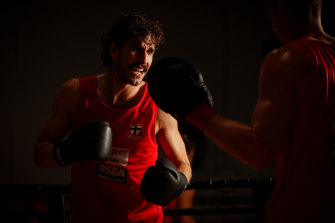 If Brown wasn’t allowed a run at the footy, so he could meet it at its highest point, his impact was diminished. In the second half of last year at Melbourne, however, he worked out how to be stronger and get involved in different ways.

When I analyse the young forwards of the competition, the obvious comparison for King is Aaron Naughton.

The Dogs’ star has faced his own challenges this year, notably against the Suns when he was blocked and buffeted off the ball, ensuring Luke Beveridge went public with his concerns on the tactics.

But Naughton, for the most part, has been able to overcome any close checking. He has a purpose, a level of aggression and will to win the ball; that’s meant he’s been tough to stop.

He attacks the footy with such velocity that even if he doesn’t mark it, he’s bringing those around him into the play.

Charlie Curnow is slightly different, but just as effective. His work rate is huge, and he has more than a few moves to create that separation from his opponent.

This is not to say Max can’t do it. I don’t see any reason why, with a few tweaks, King can’t rectify that part of his game sooner rather than later – which I’m sure will terrify defenders.

He’ll step out against the Bombers in a contest which is “Spud’s Game”, with a focus on mental health.

As blokes we’re often embarrassed or ashamed to talk of the emotions or feelings we’re experiencing, but if Danny Frawley’s passing has taught us anything, it’s to reach out to those family and friends around us. It’s as easy as picking up the phone and having a conversation.

Mental health is one of the biggest issues facing both footy and society. Sometimes that call can change your life.

Dave Egerton dead: Former England and Bath back row dies at age of 59