All eyes were on son of a gun Nick Daicos, but it was the performances by the familiar names such as Elliott, Brodie Grundy and Jack Crisp that will have Pies fans hopeful this season of regeneration also delivers its share of wins.

Elliott was strong in the air, and also left his mark at ground level with his tackling pressure. He benefited from Grundy’s supremacy in the ruck against the inexperienced Ned Reeves, which gave his team control of the midfield.

Patrick Lipinski was starved for chances at the Western Bulldogs but his strong running capacity and clean ball use was a feature of his first game in the black and white. 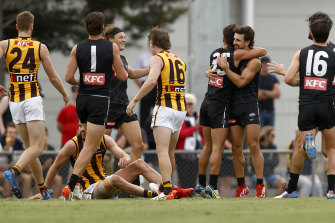 The Daicos brothers in the thick of it.Credit:Getty Images

The match finished in a draw, the Hawks 19.27 (141) to the Magpies 22.9 (141) but little should be read into the result, as Collingwood were 11 goals up after three quarters before both clubs turned out VFL sides for the remainder of the six-quarter game, which finished in fading light and with Pies assistant Scott Selwood umpiring.

For the Hawks, James Sicily’s trademarks, good and bad, were on show in his first game back from a knee reconstruction. One of his early touches came from an intercept mark but he also gave away a 50-metre penalty for backchat to the umpire after Elliott won a holding the ball decision, and found himself in a scrap with Grundy and Mason Cox. He will be better for the run.

Nick Daicos started in defence, giving away a goal through a high tackle in his first play of the game, and though he had a few starts in the centre square he was not a major contributor – as expected for a first-season draftee. His goal on the run from 40 metres out after receiving from brother Josh oozed class.

Defender Charlie Dean strengthened his case to take the backline berth vacated by the injured Jordan Roughead, attacking the ball hard in the air.

Hawthorn’s prized No.7 pick from last year draft Josh Ward provided run and precise delivery on rebound in a composed performance that has done no harm to his chances of a round one debut. He was close to his team’s best player. Connor MacDonald, the No.31 selection, had a few disposals but had little impact.

The Pies want to play a less labour-intensive game under McRae, and it was on show in the first three quarters when they moved the ball with speed to their forwards.

Relishing the extra space from not having the ball chipped from side to side, Elliott, Cox and Brody Mihocek combined for 11 goals in three quarters.

Their three-quarter time score of 111 was their highest score since round 22, 2019 – much to the mirth of their social media account.

The intent to defend was also evident, their pressure and physicality regularly drawing mistakes from the Hawks.

First-season Hawks coach Sam Mitchell said in November it would not be until March when his game plan would be evident. Such was their sloppiness with the ball, it was difficult for them to string together many meaningful plays.

Isaac Quaynor has been ruled out of the Pies’ practice game against Greater Western Sydney on Sunday week after being concussed, but the club is confident Jordan de Goey and Jeremy Howe will return.

For Hawthorn, Luke Breust (concussion) and Chad Wingard (ankle) are in the frame to face Richmond.