The New Zealand Warriors’ decision to remain in Australia for the remainder of the NRL season will double as a hammer-blow for World Cup organisers with players unlikely to extend their time on the road at the end of the year.

The recent COVID-19 scare in Sydney made it easy for the Warriors to ditch their plans to return home to Auckland next month and play it safe by basing themselves on the NSW Central Coast. 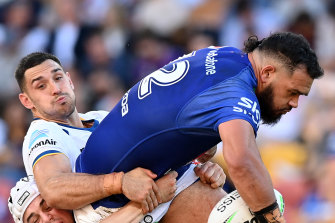 But with players on the road for the best part of two seasons, some Warriors officials acknowledge a few of their stars will be in no mood to head to the World Cup in England where they will represent New Zealand and the other Pacific nations.

There are already doubts about the World Cup proceeding because of COVID, and the Herald can reveal all players will be asked to complete a survey next week issued by the NRL and RLPA on behalf of the World Cup Organising Committee.

Plenty of players have already expressed their fears about being stuck on the other side of the world should there be a fresh outbreak at the start of the European winter, while there are also concerns about what restrictions will be placed on them during the tournament.

Warriors boss Cameron George told the Herald: “Our players would never disrespect the Kiwis jersey or whatever country they represent, but after this year with being away again, expecting them to play at the World Cup is a big ask.” 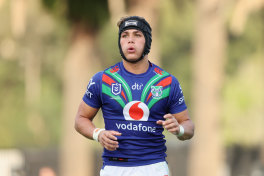 New recruit Reece Walsh will finish the season without having set foot in Auckland.Credit:Getty Images

George said the recent outbreak in Sydney quickly made it clear the safest option for the Warriors and their families was to stay put.

They were meant to fly home on June 21 ahead of their much-anticipated first home game at Mt Smart stadium in round 16 against St George Illawarra.

“But when there was that scare a few weeks ago in Sydney it became clear what direction we needed to take – it highlighted the risks to us,” George said.

“Based on what had happened, and had we been back home, we would have been rushed out of New Zealand on the Wednesday before playing against Manly, then the NRL would not have been able to guarantee us when we could fly home.

“We could have gone back home at the time but we would have been forced to quarantine for two weeks.

“By staying here we get to maintain that stability and the players remain with their families.

“We also have about a dozen players and staff, probably more, who don’t even have a house in New Zealand. A number of them have never been there.

“So it would have been really tough on everyone trying to relocate to a country, including some who needed to find a house – which is difficult at the moment in Auckland – and finding schools while still trying to focus on winning NRL games.

“The players understood it was a no-brainer in the end.”

The Warriors were stranded on this side of the Tasman last year with four players being granted leave midway through the season because of homesickness. This time around loved ones have been able to stay with the players, with some of the partners even starting jobs on the Central Coast.

George told the Herald at the start of the year he was desperate for the club to host up to 20 NRL games on New Zealand soil next year in a bid to win back the league-starved fans.

Basketball’s New Zealand Breakers were able to play a game on home soil this week against the Sydney Kings, but George pointed out the NBL was nearing the end of their season, and there were too many “commercial risks” if the Warriors followed suit before the NRL campaign has even reached the halfway mark.