Eddie Jones has tasked a well-known former NRL coach with the duties of advance scout for England’s tour of Australia in July, but his plan to use his second home – Coogee Oval – as a training base rests in the hands of the rain gods and Randwick City Council.

The week leading into the third Test at the SCG on July 16 is being dubbed as “Eddie Week” among the Randwick rugby faithful, who will roll out the red carpet for the former Galloping Greens hooker, despite the team he now coaches. 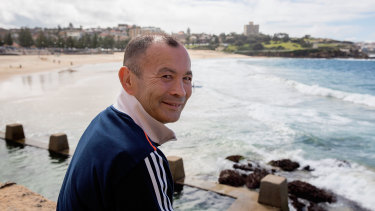 Eddie Jones poses for a photo at Coogee Beach in 2014.Credit:Michele Mossop

Jones has made it clear he wants to use Coogee Oval for the entire week, with England staying up the road at the Crowne Plaza. Former Souths and Broncos coach Anthony Seibold is now one of Jones’ assistants, but is back in Australia and has been tasked with running his eye over all the possible training venues.

The Cauliflower understands a meeting will take place next week between Seibold, Rugby Australia and Randwick club officials.

But it’s not as straightforward as handing Jones the keys to Coogee Oval, a venue he often used when in charge of the Wallabies and again with England on their 2016 tour.

As seen with trigger-happy councils all over Sydney this year, Randwick council’s rain gauge will have the final say of whether Eddie gets his Coogee Oval wish. Sydney’s big wet has seen the Galloping Greens forced off Coogee Oval a number of times this season, with just nine of 24 scheduled games taking place. Touring Super Rugby teams haven’t been able to train on the seaside oval this year either. 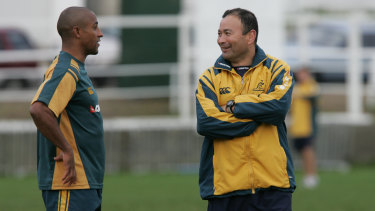 Imagine if Jones and England get shafted elsewhere.

Either way, Jones will take some time out of his busy schedule to pop in at Randwick training at Latham Park during the Sydney Test week.

“Eddie always makes a big effort to come down and help out Randwick, a club that he loves,” said former Wallaby and Randwick official Simon Poidevin. “We’re just delighted he can be involved.” 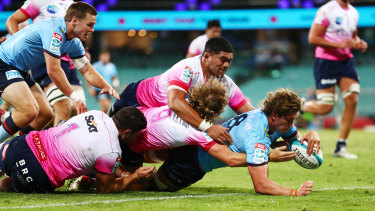 Will Harris scores a try against the Melbourne Rebels.Credit:Getty

Harris to stick with Tahs

The good news keeps rolling in for the Waratahs, with impressive back-rower Will Harris signing with NSW for another season.

After switching to No.6 in recent weeks, Harris returned to the No.8 spot last week in the Waratahs’ win over the Highlanders and had one of his best games of the year, scoring a try and carrying strongly.

Still only 21, Harris has played 27 games for the Waratahs across three seasons and is seen as a future Wallaby. He will remain at Daceyville until the end of 2023. 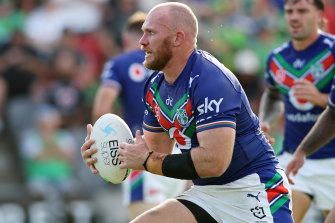 Lodge not on Reds radar

Don’t hold your breath waiting for the Queensland Reds to put in a bid for Norths second-grader and ex-Warriors prop Matt Lodge. Brad Thorn and the QRU were as surprised as anyone when Lodge’s rugby exploits emerged on Wednesday, and even with Thorn having once traversed the same cross-code path, we hear there is no interest.

The QRU may have more pressing issues to deal with if the Reds don’t perform well in New Zealand over the next two weeks in Christchurch, where they play the Crusaders in the last round and then in the quarter-finals. The usual murmur about player unrest at Ballymore has only grown in volume as the Reds have returned a 2-5 record in the last seven rounds.

Pencil in July 23 as the date Israel Folau could make his return to a rugby field in Australia.

Folau is in the process of switching to Tonga, under changes to World Rugby eligibility laws, and coach Toutai Kefu is aiming to get Folau in his team for the Pacific Nations Cup in July in Fiji, against the hosts, Samoa and Australia A. 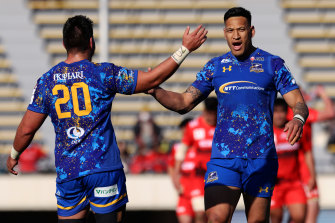 Israel Folau playing for the NTT Shining Arcs in Japan’s League One competition.Credit:Getty

Tonga are due to play a World Cup qualifier against the winner of Hong Kong against Malaysia immediately after, on July 23, but the game looks set to be played in Australia, due to a lack of suitable venues in Tonga.

That would see Folau playing rugby back in Australia for the first time since March 2019, just before he was stood down and sacked for anti-gay social media posts. Folau’s last rugby game on Aussie soil? If you guessed the Waratahs losing 31-29 to the Sunwolves in Newcastle, good memory. 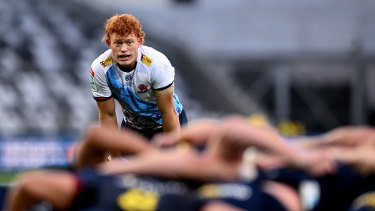 Genia calls for caution on Edmed

You can always rely on former Wallabies halfback Will Genia to offer up some nonsense-free analysis on any given topic, and his cautious take on when to progress Tane Edmed into the Australian frame was worth a listen this week.

In short, Genia said selectors should resist the urge to throw Edmed into the Wallabies before he is ready, or run the risk of stalling a promising career.

“An England series is massive. These types of series can make or break people’s careers. Go well and it gives you a reputation of being a big-game player. Or it goes the other way and it can destroy you,” Genia told The Roar’s rugby podcast.

“Someone like him, just keep allowing him to grow, develop and get better. As well as he’s playing, he’s only played six or seven games at this level. It’s a bit unfair to expect too much too soon.”

Genia pointed to Marcus Smith, who has now played 10 Tests but banked 120 premiership games before being a regular for England. Edmed has played 11 for NSW, but that’s two more than Noah Lolesio when he made his ill-fated debut for the Wallabies in 2020.

Bombers ask for clash against Hawks to be relocated