Home » Rugby » ‘Would have been difficult’: Bontempelli delighted Wallis remained a Bulldog

Western Bulldogs captain Marcus Bontempelli says he is delighted Mitch Wallis has remained at Whitten Oval ahead of a campaign where the Bulldogs will seek grand final retribution.

Wallis managed only six senior matches this season, and none after round 17 when the medium-sized forward was squeezed out.

It was a particularly tough time for Wallis, for he was the vice-captain, so had to keep thinking about others while also dealing with his own battles. However, Bontempelli had nothing but praise for Wallis, who signed a one-year extension and is determined to fight his way back into the side. 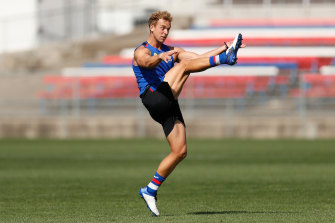 “I am sure it would have been difficult for him. We definitely spoke at different points but the most impressive thing was probably, even though the football stuff probably wasn’t happening for him, or the way that he wanted it to, his support for the group, from a vice-captaincy perspective, you couldn’t really ask more from someone,” Bontempelli said.

“Obviously, he would have loved to have been playing and been a part of it, but it was just one of those things. The game is challenging for everyone and he had to work through those challenges but still continue to help, support and guide our team – the way that he did was just amazing.”

Wallis has played 157 matches since debuting in 2011 but missed the 2016 premiership because of injury.

Bontempelli said the former Hawk, who was a finalist for the mark of the year for his grab against Greater Western Sydney, would have an important role to fill.

“To be able to add, Tim, from a positional perspective, he has had some super games, that’s a bit more experience for us. I am really looking forward to getting to work with Tim,” he said.

Hansen, a West Coast premiership player, had been a development and VFL premiership coach at the Whitten Oval before becoming a key member of the AFL program over the past five years, specialising in the forwards and offensive system. This has included ball movement between the arcs and general attacking flair.

He had been offered the role of senior assistant under Luke Beveridge when Steven King left after the season to join Gold Coast but, despite a year remaining on his contract, accepted an offer to be Voss’ senior assistant at Carlton, where he will be forward line and offensive coach.

Bontempelli said Hansen, 38, was well on his way to being ready to take on the top role at an AFL club.

“I am sure he could be if he felt that was something he wanted to do. He has had a really strong presence and influence on, obviously, our forward line and our young key forwards and what they have been able to achieve,” Bontempelli said. 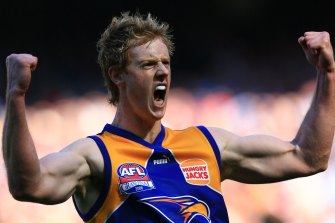 “He is a really clear thinker. I like how he coaches. He explains the game and conveys it in a way that is really easy to understand and he is really passionate. That’s the key thing. You need someone who is willing to work and put in the time and effort to help players grow. He is someone who I definitely think possesses the qualities if he wants to head down the head coaching path.”

Small forward Cody Weightman is expected to miss the opening weeks of the pre-season, having had ankle surgery. The exciting Weightman was an important piece in the Bulldogs’ rise this season, booting 26 goals in 16 matches, but was a shadow of himself in the grand final.

Having missed the preliminary final because of concussion, Weightman had only seven touches and was goalless against the Demons.

“As far as I know, it’s all tracking well. He had had a pretty good season and, as most do, deal with different injuries and ailments, but he seems to be tracking pretty well at this point,” Bontempelli said.

“I am sure he will miss a little bit of time over the next couple of months and slowly progress (through training) after Christmas.”

The Bulldogs, however, have much to do when it comes to contract negotiations. More than half of their grand-final side is off contract next season, including Jackson Macrae, Bailey Smith, Caleb Daniel, Bailey Dale, Tim English and Josh Dunkley.

Club chief executive Ameet Bains is confident the Bulldogs can avoid a salary-cap squeeze but they will hope a new collective bargaining deal between the AFL and AFL Players Association leads to an increase in the total player payments. Discussions between the league and players are ongoing.

Meanwhile, Queensland police say the investigation into an alleged incident between Bailey Smith and a man outside a Gold Coast pub is ongoing. No charges have been laid.

‘I’m going to do this my way’: Slater ready for new Origin role