Brent Naden says he will gladly sacrifice playing even a second of Sunday's NRL grand final if it means Penrith win their first title in 17 years as he fights to keep his spot for the decider.

The centre, who was relegated to the bench and didn't play a minute of the Panthers' gripping preliminary final win over South Sydney, has spoken of his desperation to prove he deserves a spot in the grand final squad. 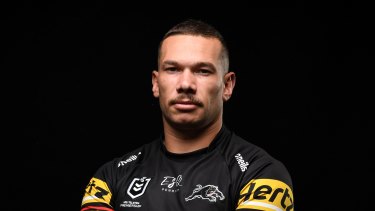 Penrith Panthers centre Brent Naden is fighting for his spot in the grand final squad.Credit:NRL Photos

"I've got one more to week to prove to Ivan that I'm capable of playing in that team. But if he wants to put me on the bench or not play me, that's his decision. I'll stand by it.

"You know where you stand [with Cleary]. There's no beating around the bush and he won't p*** on your back and tell you it's raining."

Naden has been a shining light on the field for the Panthers this year and maturely handled a racism storm when he alleged he was abused by a group of men in the crowd during Penrith's win over the Warriors on the Central Coast in August.

But his spot will be under threat with the return of Viliame Kikau from suspension and the potential availability of Spencer Leniu, who missed the grand final qualifier with illness.

Kikau's return is likely to push Kurt Capewell back to the bench. Capewell has previously filled the utility role when he was at the Sharks.

May was told more than a week before the Rabbitohs match he would be starting at centre, partnering best mate Nathan Cleary on the right edge defence which will be targeted by Cameron Munster and Justin Olam at ANZ Stadium.

"It's not like I haven't done it before so I was all right," May said. "I had a whole fortnight to get my head around it. Luckily I get to defend inside someone that I live with and two boys that I grew up playing with.

"[Earlier in the year] I was thinking 'how am I going to get in the squad?' for starters. I was thinking, 'if they're going to keep winning why would you change a winning squad?' Injuries happen throughout the year and I was lucky enough to get thrown in and hold my spot now."

It was a positive start to grand final week for the Panthers when James Fisher-Harris and Zane Tetevano both escaped match review committee charges for high shots which were penalised against South Sydney.

Ivan Cleary will name his 21-man grand final squad on Tuesday as the Panthers go in search of their 18th straight win to cap a remarkable season. Their record winning run started against Melbourne back in June.

"I've worked out [on Saturday] night I'm a nervous watcher," Naden said. "The last 10 minutes I couldn't really sit down. It was an odd one. I don't know if the relief was more excitement that you get one more week. You work so hard for so long in pre-season and now you're there."