Hawthorn have denied GWS a spot in the top eight, and in the process kept Richmond in a finals spot, after the Hawks beat the Giants by 18 points in one of their best efforts of the season at the MCG on Sunday.

Strong performances by young players Will Day, Changkuoth Jiath, James Worpel, Jack Scrimshaw Dylan Moore and Denver Grainger-Barras on debut – plus an absolute screamer mark of the year contender from Tim O’Brien – were highlights of the victory, the Hawks’ fourth of the season. 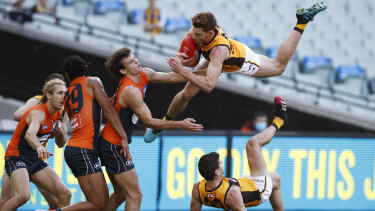 Tim O’Brien takes a ‘Superman’ grab for the ages in Hawthorn’s win over the Giants.Credit:Getty Images

Hawthorn led by three points at three-quarter-time following a Giants comeback sparked by two goals to Toby Greene, with GWS surging again in the final term to get within a kick.

But Moore put the result beyond doubt with his third goal late in the final term to record a stirring victory for the Hawks. Seconds later he kicked his fourth with a brilliant snap.

The loss was a tough one to take for GWS, who had a fair amount of the ball late but couldn’t use it well enough to get through the Hawks’ defence. Added to the draw against North Melbourne, they only have themselves to blame for not being in the top eight at the moment.

even performance from the Hawks. The usual suspects of Tom Mitchell, Liam Shiels and Ben McEvoy were good but the difference was ultimately in the extra boost their young players gave them.

Day, in particular, was superb, earning a standing ovation as he came off the ground in the final term. 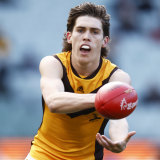 Will Day was a standout against the Giants.Credit:Getty Images

James Worpel’s charge through traffic and shot on goal was where the turn began in the first term, and the confirmation of the momentum swing came with O’Brien’s aerial brilliance and set shot, which put the Hawks two points up in the second.

O’Brien has teased and, some would say, ultimately disappointed overall across his 90 AFL games, but in this second quarter burst where he took the classic grab and kicked two goals he hinted at what he could be, if fully realised.

It was fitting that the Hawks’ No.6 pick from the 2020 draft, Denver Grainger-Barras, had his first touch of the football on debut via an intercept mark. His next touch was after another intercept, this one a strong grab among a sea of players.

Grainger-Barras was well involved in the Hawks’ second quarter resurgence. He had another first half pack mark not paid and attacked every contest he hit, but gifted a shot on goal to the Giants with a defensive 50 turnover kick.

However, all the good stuff was a glimpse of exactly the player he was drafted to be, the Hawks’ selection coming off strong showings in the SANFL in 2020.

He was involved in plenty of niggle too, which only further endeared him to the Hawks faithful.

Injured early in the season, he has bided his time in the VFL until now. Alastair Clarkson had often pointed to getting the likes of Grainger-Barras and Will Day (also injured earlier in the season) into the team when trying to sell hope after some of his side’s losses.

With both now playing, Hawks fans have a lot more to hang on to when they think of what might be possible in the future.

Unfortunately he will miss next week due to a concussion sustained in the second half.

From the Archives, 1998: Fate favors the Pies in narrow win over Freo