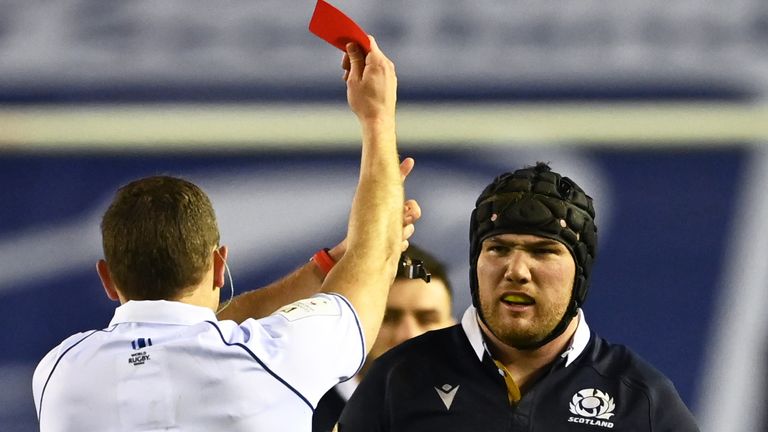 Scotland prop Zander Fagerson could play some part in the rest of the Six Nations, despite losing an appeal against a four-week suspension.

An appeal panel has decided club fixtures will count in the four-match ban, but the postponement of Scotland’s game against France on Sunday means it is unclear which international contests the Glasgow player will sit out.

After lengthy deliberations, the independent panel upheld the initial disciplinary hearing decision to ban Fagerson for four weeks after he was sent off against Wales for charging into the head of Wyn Jones while clearing out a ruck.

Fagerson was set to miss the rest of the tournament plus a further international, but Glasgow’s PRO14 matches against Ulster and Zebre will now count for the suspension.

Scotland’s games against France and Ireland were also listed in the ruling, but the panel will now review Fagerson’s schedule and “consider the consequences of the postponement”. Gregor Townsend’s side were due to close their campaign against Italy on March 20 but the rearranged date of their game with France remains unclear after the hosts reported an 11th positive Covid-19 case in their playing squad.

Fagerson’s appeal was heard on Tuesday with a decision given to the player on Wednesday evening, but it was Thursday evening when the ruling was made public.

France’s Six Nations clash against Scotland in Paris on Sunday has been postponed after a new coronavirus case was recorded in the French camp.

France suspended training on Thursday when a fresh Covid-19 positive was returned among their players from tests conducted on Wednesday. The squad is now isolating.

The Six Nations Testing Oversight Group (TOG) met on Thursday to review France’s situation and came to a unanimous recommendation that the game be postponed.

It is unlikely that the game will be rearranged for the second rest week of the tournament (weekend of March 6 and 7) because there remains a risk of infection within the France camp.

Scotland could be without more than 10 players if the game is rearranged for outside World Rugby’s international window due to them being recalled for club commitments.