It's fair to say that Mesut Ozil is a divisive figure among Arsenal fans.

But there's one thing you can give him credit for – he's not afraid to open his mouth when he needs to.

Despite his current exile from first-team action, which will likely mean that he will have played his final game for the Gunners, he has opened up to fans.

Ozil took part in a Twitter Q&A session on Monday night, answering questions from fans on his past… and also the future.

A range of topics was covered, from Arsenal struggles to his love for Fenerbahce.

Here's what we learned from the session… Fair play to Ozil, he came straight out of the blocks and addressed his current situation at Arsenal.

The question simply asked him whether he enjoyed playing for Arsenal.

He responded across two tweets: "Of course – there have been many ups and downs so far, but all in all I've never regret by decision to join Arsenal.

"And to be honest, the last couple of games before the corona break in February and March 2020 made a lot of fun.

"I've enjoyed my time a lot and I've thought we're really on a very positive way. But after the break, things changed." Yep, he's still loved by Arsenal fans. In the very first question of the Q&A, Ozil took a dig at Tottenham.

Fair play to him. Knows how to keep the fans on his side, even with his exit impending.

Ozil was asked whether what his decision would be if his only contract offer was from Tottenham.

3. He's got doubts over the current XI

While he did not explicitly say it, there was a pretty clear theme when he named the strongest Arsenal XI that he has played alongside.

Of the XI, just one member of the team was currently in the Arsenal first-team line-up.

That player is Pierre-Emerick Aubameyang. He does include himself and Sead Kolasinac, but neither are currently in the squad. 4. He already has his sights set on Istanbul

Ozil's move to Fenerbahce might not be confirmed… but he already knows where he wants to live.

The German has been a frequent visitor to Istanbul and he replied to a Turkish question during the Q&A.

He was asked what his favourite district of the city was. His response was "Kadikoy".

5. All the love is for Fenerbahce

Alright, Mesut, no need to hint at a move to Fenerbahce any more.

He was asked why he likes the Turkish club so much, and the response was pretty self-explanatory. It went down well with the Turkish fans in the replies.

He said: "I grew up as a Fenerbahce fan as a kid in Germany – every German-Turkish person supports a Turkish team when they grow up in Germany. And mine was Fenerbahce.

"Fenerbahce is like Real Madrid in Spain. The biggest club in the country." 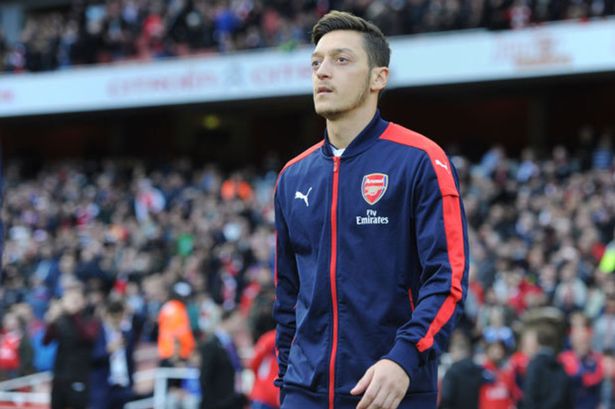 6. A loan is not possible right now

He was asked whether he would be able to join Kolasinac on loan at Schalke, who are rock bottom of the Bundesliga, for the rest of the season.

But in his response, while complimenting the club, Ozil said: "It's not really an option for me right now…"

Which, as it seems, makes out that some kind of decision has been made on his future.

Ozil still has love and admiration for his former Arsenal manager, Arsene Wenger.

He wrote: "Arsene Wenger is a special coach in my career, one that I have total respect for.

"He is a great coach with numerous titles.

"Most of all, he's a great, sincere person. I associate him with my greatest Arsenal successes. I will always remember that time with him positively." Emile Smith Rowe has been the name at the tip of the tongue for Arsenal fans recently… and it's the same for Ozil.

He also believes that using a standard No.10 is the way forward for football managers.

"He made the difference in the past couple of games as a No.10 – really happy for him.

"And he showed that playing with a No.10 still can make sense in total's football."

Sergio Ramos is the best defender of a generation, Ozil says.

"He's been world class for over a decade – and what a leader he has become," Ozil wrote.

"His ambition and will to win is amazing.

"I would say he's the world's best defender from my generation."

10. It's Ronaldo over Messi

Of course it is. He played with Ronaldo.

A little dig at Messi, too, for not leaving La Liga and spreading his wings elsewhere.

Ozil wrote: "Messi has proven himself to be one o the best ever in Spain, bit Ronaldo was always the best in every country he's played in!" That's the question on the lips of fans around the world.

He has been linked to both Fenerbahce and DC United over recent weeks. So, what does Ozil reckon?

"There are two countries I want to play football in before I retire: Turkey and USA. If I went to Turkey, I could only go to Fenerbahce."

Right, that's no clearer, then!

Daniel James names the other fastest players at Manchester United