Would YOU want to hear the referee and VAR as they decide on a penalty? Australia’s A-League mics up the officials to let fans know EXACTLY how calls are made… but it STILL leaves supporters divided!

While Premier League fans desperately urge for clarity over dubious VAR calls this season, Australia’s A-League have come up with a clear way to communicate with fans when a tight decision has to be made.

Week in week out in the Premier League, controversial VAR decisions are stealing the headlines and the latest one came on Saturday when Lee Mason ruled out a Brighton goal from a free-kick twice at the Hawthorns – with no one any wiser to why it hadn’t been allowed.

But the A-League, in a similar way to rugby, have devised a plan that allows fans to clearly understand the thought process behind the referee’s decision – with officials mic’d up throughout the match. 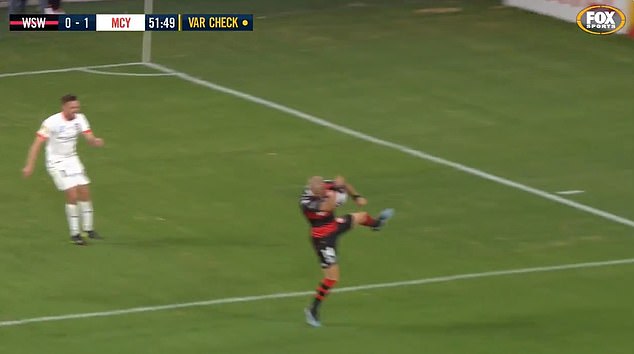 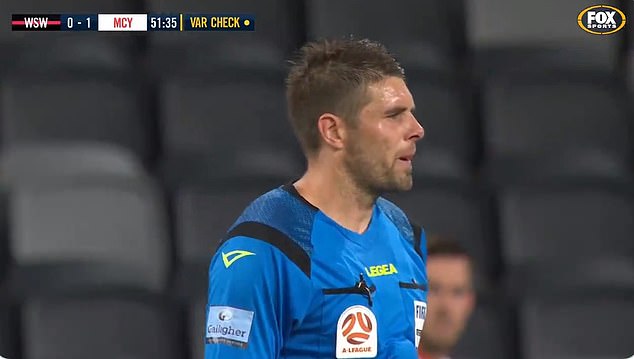 During Western Sydney Wanderers’ home clash against Melbourne City on Tuesday, the ball appeared to strike the hand of James Troisi in the penalty area but the referee Shaun Evans awarded a corner to the visitors instead.

But after calls from Melbourne City for a penalty, the VAR official immediately demanded Evans – who admitted he had been blind-sided – to pause the game before telling him: ‘VAR to ref, I am going to recommend an on-field review for a potential penalty for handball.’

The referee then goes straight over to his pitchside monitor, and the VAR can be heard saying: ‘When you are there, I am going to show you the still shot… clearly away from the body. He is making himself bigger and it is inside the penalty area.’

The match official is in total agreement with the VAR and as he asks him to roll the replay on slightly while watching still images of the handball, the referee claims: ‘He clearly makes contact. My decision will be penalty kick, no sanction.’ 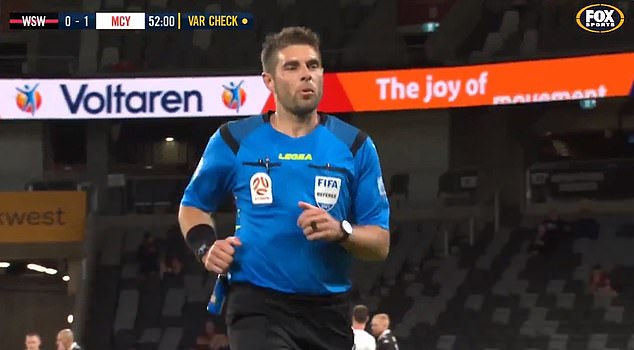 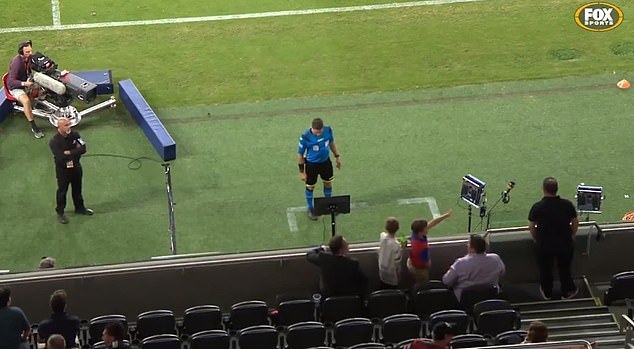 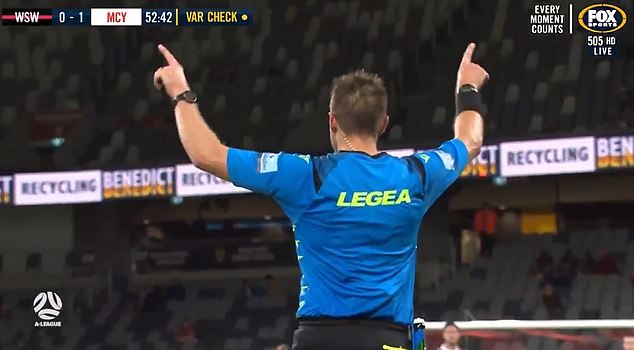 He eventually overturned his original decision, awarding a penalty to Melbourne City

The original decision was simply and effectively overturned by the officials and Melbourne City subsequently doubled their lead to 2-0 from the spot.

But despite the transparent communication with supporters, it has still left many thoroughly divided and the debate over VAR rumbles on.

There were many who still find it a waste of time, while insisting the officiating decisions aren’t any better.

One fan wrote: ‘Clear and obvious? Really? That’s just taking a punt. Get rid of VAR killing the game.’

‘What is he supposed to do? What a joke,’ another angrily wrote on Twitter.

And those against it kept flocking to social media, with another user expressing their frustration: ‘Please. Get. Rid. Love the game, been a passionate regular for 40+ years. One of us has to go.’

Finally, one social media user said: ‘I defy anyone to try and raise a foot while running and not also have to change the position of their arm purely for balance. Ruining the game.’

However, the reaction wasn’t all negative with some fans urging the Premier League to introduce the mic’d up process straight away.

‘Why oh why can’t this be done here!’, one football insisted on Twitter. Another said: ‘This is brilliant. We must apply this in the #epl.’

And one football supporter said it needs to be introduced immediately in England: ‘Do this in the Prem. Starting today.’

Whether the Premier League would ever introduce this remains to be seen, but on this evidence, at least fans know exactly why or how decisions are being made.