Socceroos legend Harry Kewell has tested positive for COVID-19 and will sit out Oldham Athletic's next three games, the English fourth-tier club has confirmed.

Kewell returned a positive test on Tuesday after feeling "unwell" over the weekend and will self-isolate for the next 10 days, Oldham said in a statement. 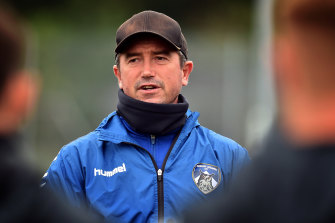 The 42-year-old missed their 1-1 draw with Carlisle on Wednesday morning (AEDT), with assistant coach Alan Maybury taking the reins – but that did not stop Kewell from instructing his players and staff from afar, before and during the match.

"It's a little bit chaotic. The manager's in my ear with plenty of advice, everyone around the club has rallied together," Maybury said post-match.

"He spoke to some of the players today, he got in touch with them – just little bits of detail. Obviously we've chatted a lot over the last couple of days as we always do.

"It's not an easy couple of days but I said to the players what we had in the change room is what we've got at the moment so we stick together." 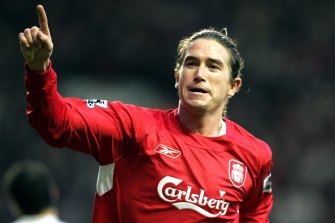 Harry Kewell in 2006 during his Premier League days at Liverpool.Credit:AP

Oldham – a foundation club of the Premier League who have fallen on hard times in recent years – will face Port Vale and Southend before Kewell is due back from his isolation period.

The draw with Carlisle leaves the Latics in 19th spot on the League Two table, with just one win from Kewell's first seven games in charge.

It has been a difficult start to the season for Kewell, who is in his third senior managerial position after ill-fated stints at English lower-league clubs Crawley Town and Notts Country.

The former Leeds United and Liverpool sensation is Oldham's eighth coach since Moroccan owner Abdallah Lemsagam took over the club in January 2018.

Kewell brought former Adelaide United striker George Blackwood to the club when he took over but the 23-year-old Australian is yet to score in three appearances and did not feature against Carlisle.

Kewell's diagnosis comes amid a sharp increase of COVID-19 cases across the United Kingdom, which has scuppered plans to allow supporters to return to stadiums and could yet have a more pronounced impact on the sport at both club and international level, with many English teams at the bottom of the nation's football pyramid struggling to survive.

Meanwhile, Bayern Munich forward Serge Gnabry also tested positive for coronavirus on Tuesday, and more tests for his teammates were planned Wednesday morning before the defending champion’s opening game of the Champions League.

The club said in a brief statement that the 25-year-old Gnabry is “doing well” and is in quarantine at home. He is Bayern’s first player to test positive for COVID-19.

Gnabry trained earlier Tuesday with his teammates in the final training session for Atlético Madrid's visit in the Champions League on Wednesday.

It was unclear what effect Gnabry’s positive result would have on the rest of the team. His teammates were to undergo more tests on Wednesday morning.

More positive results would not automatically lead to Wednesday's game being postponed. UEFA rules say games can go ahead as planned if a team has 13 available players, including at least one goalkeeper. But Bayern will be hoping that local authorities do not order the whole squad into quarantine.