Home » Soccer » ‘A world away from you know who’: Crystal Palace fans enjoy first steps of the Patrick Vieira era

Patrick Vieira is off and running as Crystal Palace boss

Patrick Vieira was the talk of South London on Saturday as Crystal Palace welcomed Brentford for his first competitive home game since being appointed manager, and the club’s first game for 18 months with a stadium full of fans, but there was one name that was banned.

The parallels between Vieira and a certain Dutch manager whose name is also banned from this article and lasted just 88 days back in 2017 were pretty obvious; both former world class players, both managerially inexperienced, both making their Premier League debuts in the dugout with the Eagles. Home fans were hoping that’s where the similarities would end.

But forget [redacted] it’s been four years since he left with his tail between his legs, how would Palace fans take to the new man at Selhurst Park after four pretty solid, if at times uninspiring, years under Roy Hodgson? Like swapping a reliable old Rover for a sexier Citroën. It looks fancier and might drive faster but there’s no guarantee it will get you where you need to go any quicker.

The mood at the Pawsons Arms, a Palace pub 10 minutes from Selhurst Park, was pretty upbeat before kick-off. That was probably down to the chance to be back in the ground, the new manager, and the fact Becks bottles were buy one get one free.

I ask my two mates Ben and Travis what they reckon. “It’s a risky appointment but I am excited about it,” says Ben Mintram. “We were in a rut with Hodgson, despite the safety. It’s nice today to be going to a game feeling excited that we’re going to get something a bit different. We’re signing attractive players, it’s exciting!”

Travis Endeacott agrees: “There’s a bit of caution, people don’t want another [redacted] to happen. The younger signings, the new manager, hopefully it can blossom into something good…but let’s see. In six weeks time we’ll have another re-evaluation.”

But mostly they’re both excited to be back at the pub, which is absolutely rammed with Palace fans who are singing, drinking and raising money for charity after a pub staff member’s long battle with cancer.

“I said last night it was like Christmas Eve, going to sleep believing that Santa still existed,” says Travis. “That’s how excited I was last night. That little taste of the Arsenal game in May [where 6,000 fans were allowed in] that was almost like rubbing salt into the wound, it was like this is what it could be like, and now this is what it is.”

When the teams are announced and apps are checked it’s spotted that the official Palace website has Jordan Ayew down twice, once on the bench and once in the starting lineup. He does cover a lot of ground for the Eagles but not that much.

The walk to the stadium, left out of the bunnyhole under the railway by Selhurst station of course, only adds to the anticipation although once at the ground there is a swift reminder of Palace’s rushed through new digital ticketing system which results in huge queues down the Holmesdale Road with only a few minutes until kick-off.

Palace CEO Phil Alexander is even spotted helping supporters scan their tickets on the way in, which is either an indication of how community spirited the club are or how panicked they were at 2.55pm.

Once inside the atmosphere is electric, a full Selhurst Park for the first time in 18 months and to mark the occasion – and Vieira’s debut – the Holmesdale Fanatics have put red and blue flags on every seat inside the stadium. When the teams emerge and flags are waved it is genuinely quite emotional.

There are huge cheers for Vieira as stadium announcer Mike Rankine introduces him to the crowd as there are for new signings Conor Gallagher, Marc Guehi and Joachim Andersen when the teams are read out. All three start.

Referee Martin Atkinson gets the game underway but it is actually quite hard to hear his whistle amongst the cacophony of noise the home fans are making. The atmosphere is only punctuated by big “oooohs” for Gallagher as he smashes the ball against the post seven minutes in. He is an inch away from giving Vieira the perfect start to life at Selhurst. It would have taken the roof off. 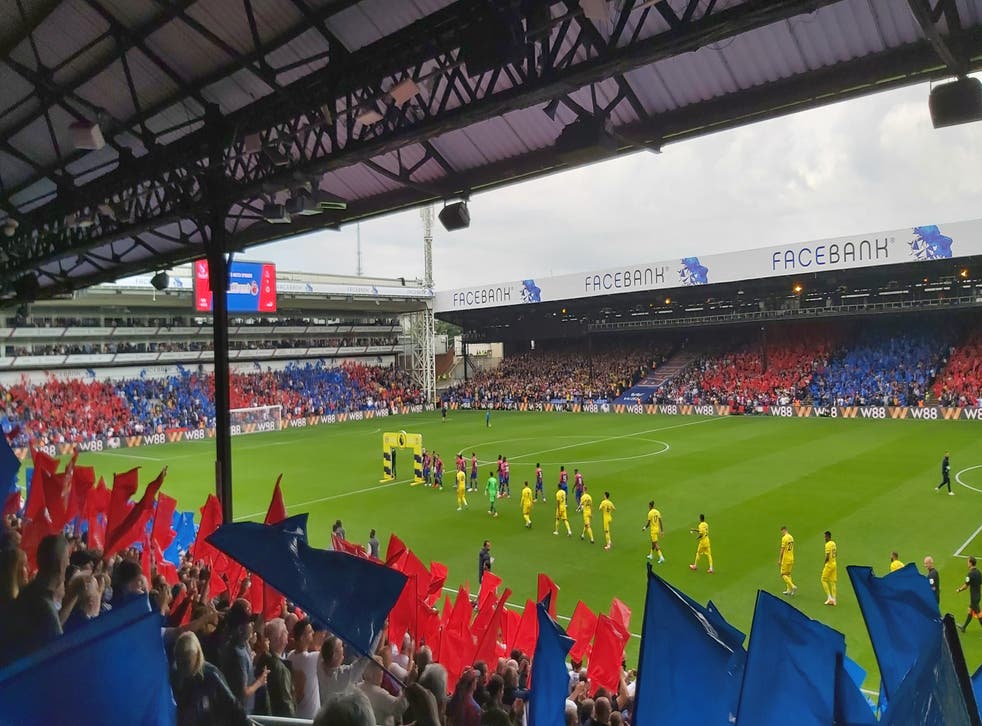 Crystal Palace emerge for the first home game of the season

A few minutes later the fans start singing “Patrick Vieira’s Red And Blue Army” which might be the quickest a new manager has ever had his name sung from the stands. Clearly he has the supporters backing, for now at least.

The opening exchanges are frantic, Brentford have come here to spoil the party and build on their excellent opening day win over Arsenal while Palace are intent of making up for defeat at Chelsea and try to implement a new style of football. It’s Gallagher who catches the eye early on, covering ground from box to box with endless energy.

“He’s making the difference,” I say to my Dad, who I sit behind in the Main Stand. “We’ve needed a younger midfielder.” “We’ve needed a younger everything,” he replies. Gallagher, Guehi and Andersen’s arrivals coupled with the departure of the likes of Gary Cahill, Mamadou Sakho, Andros Townsend and Scott Dann have reduced the squad’s average age considerably.

After 20 minutes or so it’s clear this is nothing like 2017, nothing like when [redacted] was in charge and nothing like that awful opening day home defeat to newly promoted [redacted]. (That word was also banned on Saturday).

Both sides fail to really lay a glove on each other but are feisty and energetic. Ivan Toney goes close with a drive before missing a pretty free header in the second half while Christian Benteke rises well to meet a Joel Ward cross but nods it over.

As the game wears on Wilfried Zaha, who is having a quiet game and whom the new manager admits he will have to find a way to get the best out of, fades while Vieira himself shows he still has it as he traps a ball perfectly on he touchline that flies into touch.

Brentford decide to settle for a point with 15 minutes to go while Palace try to nick something but spend a lot of time building from the back when a bit of urgency wouldn’t have gone amiss. There is one shout of “stop messing about at the back!” from someone so maybe not all fans are on board yet.

The final whistle comes and most of the home fans are frustrated at not getting all three points but content with what they’ve seen from their first viewing of Operation New Vi-era.

“We’ve seen enough to think we’ve got plenty of chances of staying up here,” says my Dad, for whom Vieira is the 34th manager he’s seen since he started watching Palace in the early 1960s. “One goal would have been nice though. I can see what he’s trying to do and we seem to know what we’re trying to do. I don’t think we’ve been as good as we will become.” 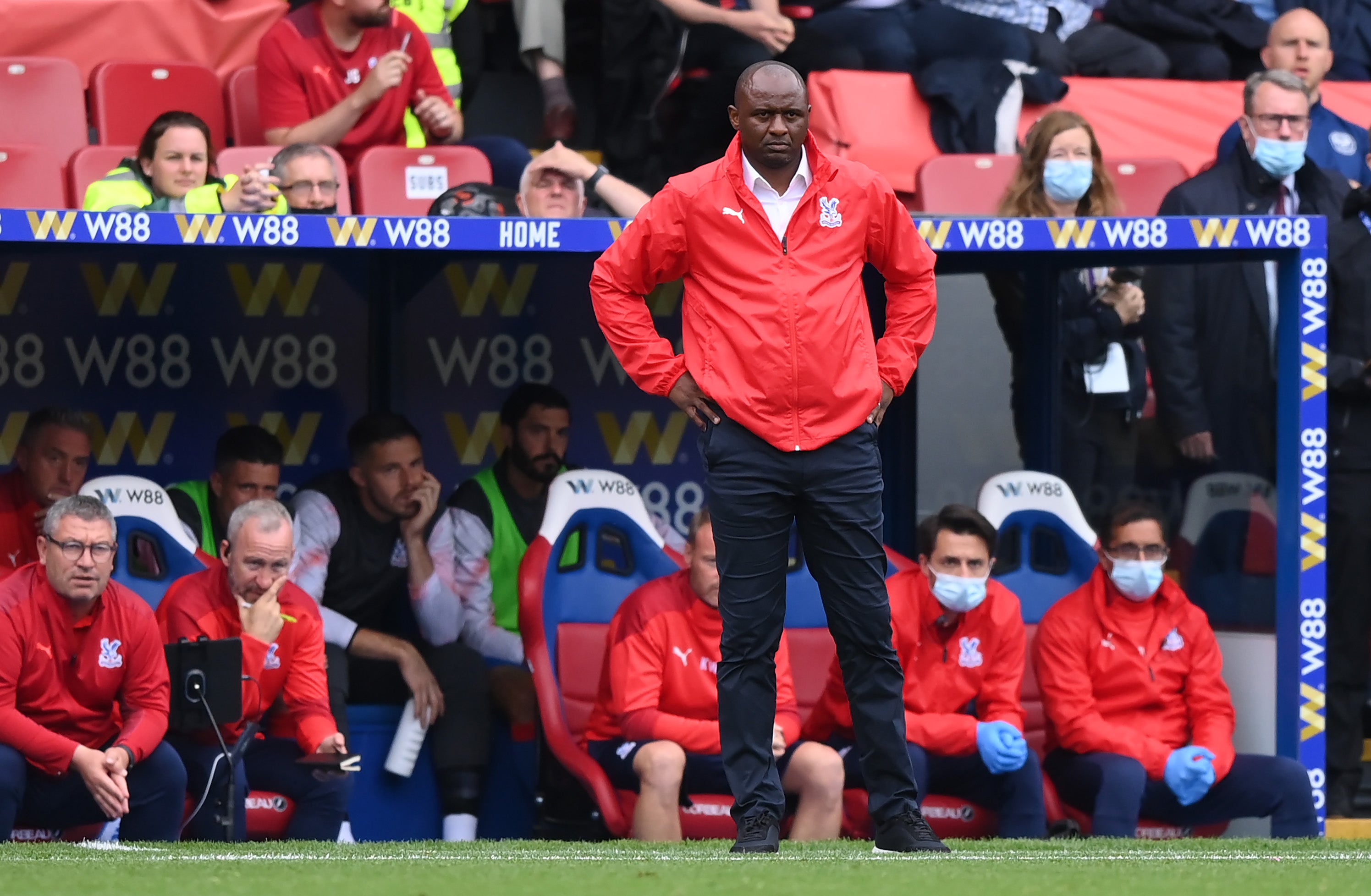 Vieira has earned his first point as Palace manager

Vieira leaves the pitch to another rendition of his new song having become the first Palace manager since Alan Pardew in January 2015 to avoid defeat in his first home league game. If Vieira can also avoid dad dancing on the touchline he’ll probably be alright.

He clearly enjoyed himself, saying to reporters after the game: “Look at the atmosphere today: the players were at the level of the atmosphere in the stadium. We have to keep demanding on ourselves. This is a benchmark for us to keep improving on the field, but to keep that level of commitment every day.

“The atmosphere was unbelievable, from the first minute the fans were behind the team and gave them support.”

The player that the fans are most in love with already after the game is Gallagher and his lung-busting midfield runs and crunching tackles. “He is the Yohan Cabaye we thought we were getting back in 2015,” says Travis while the feeling is clearly mutual as Gallagher told the press afterwards the noise from the fans was “crazy” and “incredible”.

Gallagher is part of this new-look Palace, moving away from the cautious, ageing team Hodgson presided over towards a more dynamic, expressive side and Vieira is keen to focus on that after the game. “This is part of the DNA of the football club,” he says in his post-match press conference. “Players on the field, this is a given for the football club. When you play in front of our fans, that’s the minimum we can do.”

Palace fans don’t ask for much but they, like fans of most clubs, just want a bit of fight, a bit of invention and a bit of an indication of what the club are trying to do. They got that on Saturday, even if they didn’t get three points that would have helped going into a run of three games against West Ham, Tottenham and Liverpool.

“This was a world away from you know who,” says my Dad as we walk back to Selhurst station. “We know what we’re doing. Especially when you consider who we have to come back.”

With club captain Luka Milivojevic, last season’s star Eberechi Eze and new signing Michael Olise all still to return things should get better for Palace and Vieira. At least they can lay the ghost of [redacted] to rest seeing as Vieira now already has more points than the Dutchman got in his, admittedly very short, Palace career.

Portsmouth 0-1 Lincoln: Morgan Rogers puts Imps back on top of League One