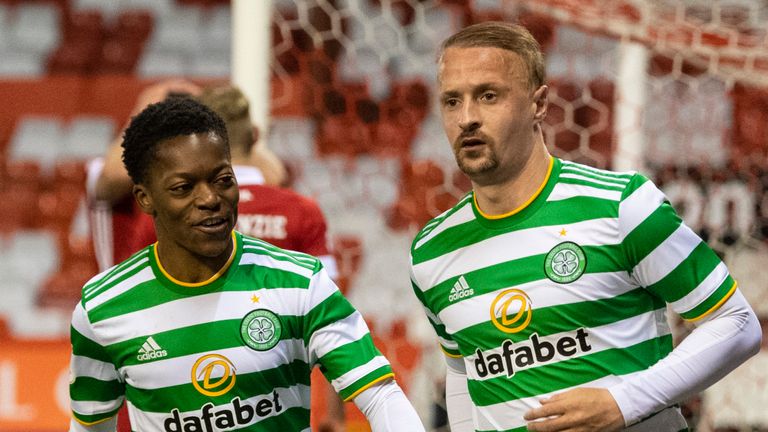 In Stephen Glass’ first league game as Dons boss, midfielder Lewis Ferguson put the home side ahead in the 17th minute and came close on three other occasions in the first half while also clearing off the line.

The Aberdeen playmaker also hit the woodwork after the break but Celtic missed several chances and also hit the bar before Griffiths, on for Odsonne Edouard, headed in a Mohamed Elyounoussi cross in stoppage time for a share of the spoils.

The visitors then threatened. In the ninth minute, after Edouard was fouled by Dean Campbell 25 yards from goal, Parkhead midfielder David Turnbull curled in a free-kick.

However, keeper Gary Woods, in for injured Joe Lewis and making his first Aberdeen start since joining on loan from Oldham in October, was well placed to beat away.

McCrorie, injured as Edouard fell onto him when previously fouled, failed to shrug off a leg injury and was replaced by 17-year-old Calvin Ramsay.

Four minutes later Celtic, who have suffered so often this season from set-pieces, conceded from a corner.

Niall McGinn’s delivery from the right was met by skipper Andy Considine and his header found Ferguson in front of Kenny at the back post and he gleefully knocked the ball in from a yard out.

With the Parkhead side still reeling, a Ferguson header from a Jonny Hayes cross was well saved by Bain down at his left-hand post.

Edouard then passed up two good chances, missing the target with a shot from 10 yards before his close-range volley was stopped by Woods. 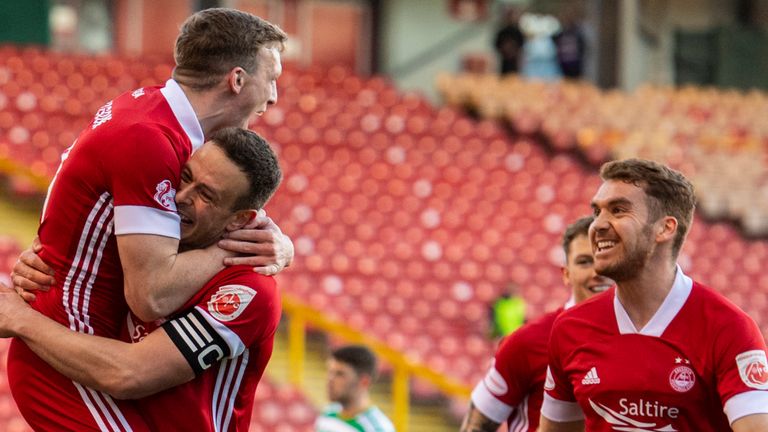 At the other end, Ferguson came close again when his drive from the edge of the box was saved by Bain.

The former Hamilton player was having quite a night.

After Woods saved another effort from Edouard and Ryan Christie’s shot was deflected over the bar by Hayes for a corner, Ferguson cleared a Christie header off the line.

Celtic finished the half well on top and Edouard had the ball in the net from five yards only to see the offside flag up.

The visitors started the second half strongly and, in the 53rd minute, Edouard cushioned a header into the path of Turnbull but, with only Woods to beat, he cracked the crossbar with his shot.

The visitors dominated possession but the Dons stood firm.

Griffiths and Tom Rogic replaced Christie and Edouard on the hour mark but it was Aberdeen who should have made it 2-0 soon afterwards.

Celtic skipper Scott Brown – who joins the Dons in the summer as player-assistant – tried to block a Hendry pass only to knock it straight to Ferguson but, with only Bain to beat, he hit the outside of the post.

As the Parkhead side kept up the pressure Turnbull then dragged a shot past the far post before Hayes, in a breakaway from his own half, was chased and caught by midfielder Callum McGregor but referee Willie Collum ignored penalty claims.

It looked like Aberdeen were going to hold out but, deep into three added minutes, Griffiths leapt at the back post to nod Elyounoussi’s cross past Woods for a deserved point.

Aberdeen host Dundee United in the Scottish Cup fifth round on Sunday; kick-off at 2.30pm.

Having been knocked out of the cup by Rangers last weekend, Celtic’s next game is on May 2, also at Rangers; kick-off at midday.