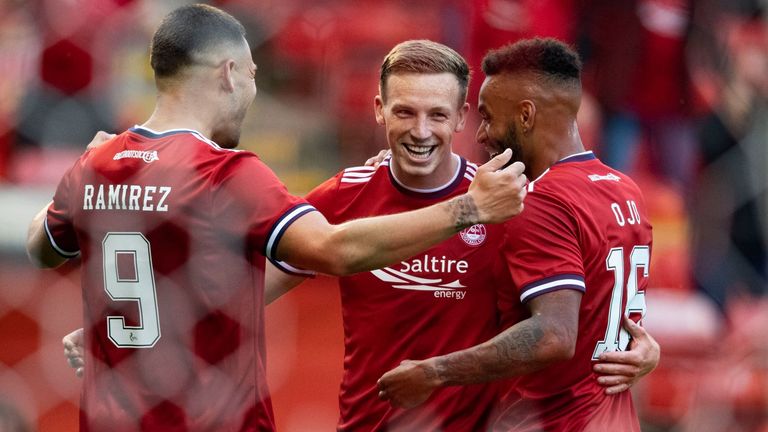 Lewis Ferguson was a post’s width away from a hat-trick as Aberdeen treated their fans to a new European glory night on their return to Pittodrie.

The midfielder enjoyed his first game playing alongside former Celtic skipper Scott Brown, hitting the post from 25 yards before netting a penalty and succeeding with another long-range strike in a 5-1 victory over BK Hacken.

Andy Considine had headed the Dons ahead during a spell of intense first-half pressure in the first leg of the Europa Conference second qualifying round in front of a reduced capacity crowd of 5,665.

Alexander Jeremejeff gave the Swedes a lifeline with the visitors’ first effort on target.

But Christian Ramirez and substitute Connor McLennan gave the Dons some breathing space ahead of next week’s trip to Gothenburg, the scene of their 1983 European Cup Winners’ Cup final triumph over Real Madrid.

Brown and Ramirez were joined by Jay Emmanuel-Thomas in making their debuts but Declan Gallagher was denied his introduction by a European suspension after being sent off for Motherwell last season.

Brown had an eventful opening few minutes. The 36-year-old raced forward to put in a tackle on the Hacken by-line, was spoken to by the referee for some minor jostling at a throw-in, and then gifted possession to Leo Bengtsson inside his
own half. Considine came to his rescue with a block before being booked soon afterwards for a foul right on the edge of his box.

The Hacken free-kick hit the wall and Aberdeen gradually settled around the 20-minute mark with Brown proving a calming influence after his slightly chaotic start.

Funso Ojo, back from a loan spell at Wigan and deployed in left midfield, forced a decent stop after being set free by Emmanuel-Thomas, who had a header cleared off the line from the resulting corner.

Ramsay also swung the next corner towards the back post and Considine timed his run perfectly to head home in the 28th minute with goalkeeper Peter Abrahamsson stranded.

The chances kept coming. Abrahamsson made a double save from Ojo and Ramirez before holding a Ryan Hedges header. And Ferguson doubled the lead a minute before the break after a foul by Bengtsson on Hedges.

The midfielder showed his confidence eight minutes after the interval when he unleashed a powerful strike from nearly 30 yards which beat the goalkeeper inside his near post.

The visitors, who are 11 games into their league season, pulled one back out of the blue in the 59th minute when Jeremejeff collected a ball forward and worked room to curl into the top corner from 16 yards.

Aberdeen did not exert the same pressure as the first half but they were still creating the occasional chance with Hedges and Ramirez going close.

The United States striker netted from close range in the 83rd minute when he slid in to convert a driven ball by Jack MacKenzie, who was on for the injured Ojo, and McLennan curled home the fifth in stoppage-time.