No, Aberdeen’s first one-off, 90-minute, winner-takes-all European fixture since May 11, 1983 was never going to hit the heights of that magical night at Gothenburg’s Ullevi Stadium. Steady on.

But Thursday night’s 6-0 victory over NSI Runavik? It was their biggest home win in UEFA competition since Alex Ferguson’s mighty Dons battered Sion 7-0 early in that spectacular Cup Winners’ Cup run of season 1982-83. 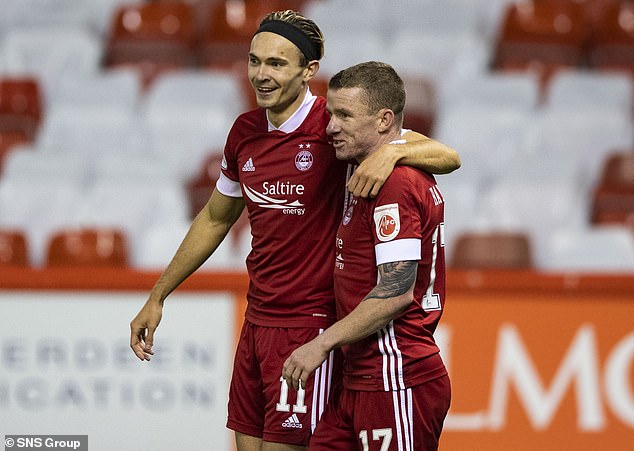 So, quirks of this year’s condensed calendar notwithstanding, Derek McInnes’ men at least enabled their armchair-bound supporters to go gently bobbing around the front room on a wave of pleasing satisfaction.

NSI weren’t so much beaten as dismembered. And you wouldn’t have needed CSI Torshavn to investigate the cause of their demise.

Sub Ryan Hedges bagged a quickfire double after coming on in the interval to make it 4-0. 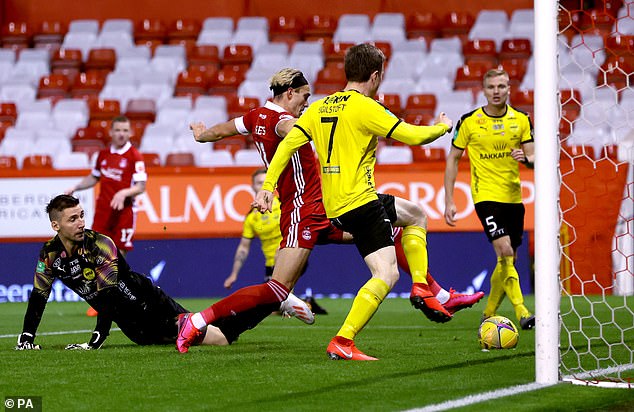 And returning fans’ favourite Jonny Hayes scored with a screamer of his own just moments later – the Irishman’s first goal for Aberdeen since the 2017 Scottish Cup final.

Hedges completing his hat-trick four minutes from time, converting from the penalty spot after Ferguson had been bundled over by Rogvi Nielsen, gave McInnes the biggest European win of his time at Pittodrie.

And his team, who have never made it to the group stages during his tenure, are seeded for Monday’s second-round draw.

Against opponents sitting fourth the Faroese top flight, it’s fair to say that Aberdeen were always expected to control the pattern of play. And they certainly started the game full of intent.

Scott Wright had an interesting first half, starting when he suffered a painful-looking wrist injury as a clearance was smashed against his arm barely a hundred seconds into the game. 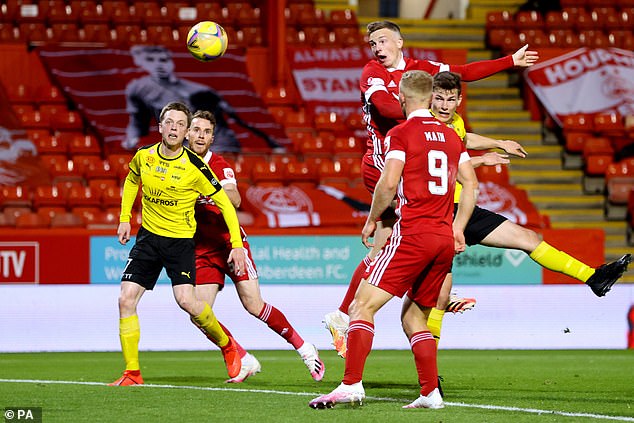 Having gamely played on after treatment on the sidelines, he carved open the best early chance of the game with nine minutes gone, taking advantage of clever-build-up play involving Marley Watkins and Matt Kennedy, driving into the box from the right wing – and sending a left-footed shot flying just off target.

Barely a minute later Kennedy skipped beyond Oddur Arnason Hojgaard and delivered a vicious cross that Curtis Main attacked at the near post, sending a flashing header just wide.

Kennedy was finding it very easy to make progress down that right wing, another of his teasing deliveries headed against the arm of defender Johan Davidsen by Wright.

With Wright tucked in behind Main and Marley Watkins and Jonny Hayes wandering infield from open his starting position on the left wing, Aberdeen did not lack obvious threats.

Yet the visitors seemed, if not overly blessed with great technique or basic footspeed, at least obdurate enough to make Aberdeen work for their chances.

Runavik were being loudly encouraged on the bench, while players on the pitched celebrated winning a 50-50 as if they’d scored a late winner.

Even a throw-in decision going their way had the keeper nearly doing cartwheels. 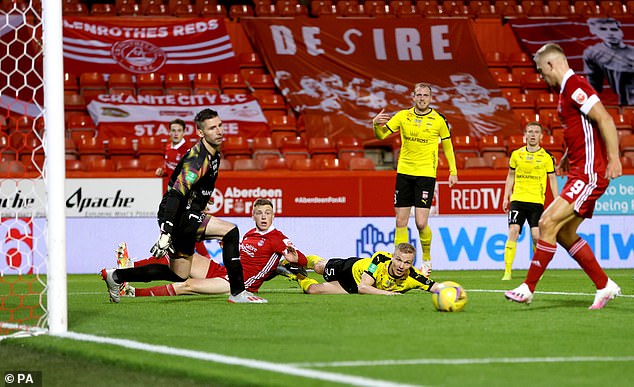 Still, it was only a matter of time, right? There were too many holes in that yellow-and-black wall. Too man men in red offering too much quality.

Witness one absolute worldie of a Ross McCrorie ball down the right wing for the energetic Wright, who put in another teasing cross just on the half hour mark.

There was nothing the defensive leader could do about the Dons opener with 36 minutes on the clock, however.

Kennedy was once again involved, darting across the box and playing a one-two with Watkins before feeding the ball out to Andrew Considine, whose chipped cross was nodded home by a leaping Ferguson.

Six minutes later, Aberdeen doubled their lead, Wright this time turning tormentor of the poor bewildered NSI defenders asked to cover their left flank, his low cross going past a sliding Ferguson and finding Main waiting for a tap-in at the back post.

Main’s first start of the season – he’d been out with a thigh injury – ended at the interval, McInnes removing the target man and throwing Hedges into the fray.

And Hedges was on the park barely five minutes when he’d found the net, bundling the ball home from a Hayes low cross after some lovely footwork and a neat pass by Dylan McGeouch – another Don getting his first start of the campaign.

The sub wasn’t wasting time in making an impact, his second – a thunderous strike from distance after a neat lay-off by Wright with 59 minutes on the clock – worthy of a much more glamorous occasion.

Hayes then scored a screamer of his own just four minutes later, leaving Runavik in no doubt that they were in danger of serious embarrassment.

They rallied and plugged away, kept on running themselves into the ground.

But there was a weariness about the penalty they conceded, the ragged Nielsen simply running into Ferguson as the ball bounced around the box.

Hedges made no mistake from the spot, completing his hat-trick on a night when Aberdeen had half a dozen contenders for man of the match honours.

Job done, then. And then some.