Western Sydney Wanderers’ seven-match unbeaten streak in the A-League has come to a grinding halt, losing 3-2 to Adelaide United despite a ferocious second-half onslaught on Saturday.

Teenager Mohamed Toure – arguably the brightest young prospect in the Australian game – finished a clinical counter-attack to score his third goal of the season in the 82nd minute, putting the Reds 3-1 up and seemingly killing off any hope of a Wanderers comeback. 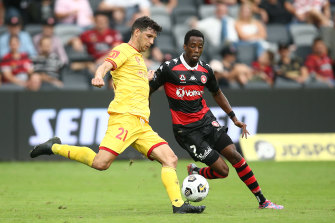 Javi Lopez on the attack at Bankwest Stadium.Credit:Getty

But Mitchell Duke hit back eight minutes later to set up a grandstand finish at Bankwest Stadium. The former Western Sydney skipper came agonisingly close to levelling the scores in injury time, but the brilliant James Delianov tipped his shot onto the right post.

It was Western Sydney’s second loss under Carl Robinson and their first since their opening-round defeat to Macarthur FC. And they only have themselves to blame for letting the visitors slink away with all three points.

The Reds needed 66 seconds to take the lead on Saturday when fringe Socceroo Craig Goodwin – in his first appearance for the club since sealing his loan return from Saudi Arabia – smashed home the scraps from a corner that the Wanderers failed to adequately clear.

They scored again in the shadows of half-time when Ben Halloran spotted an unmarked Stefan Mauk in the box, and he had all the time in the world to place his shot past Daniel Margush.

In between, the Wanderers had an incredible 11 corners to Adelaide’s zero – and one of them yielded their best chance of the first half, but Delianov managed to bat away an on-target header from Ziggy Gordon.

Robinson turned to his star-studded bench to turn things around after the break, sending on Mitch Duke, Bruce Kamau and impressive young wing-back Thomas Aquilina. James Troisi, who controversially walked out on Adelaide on the eve of the season, and Bernie Ibini followed not long afterwards.

The changes had the desired effect, with the injection of fresh blood giving the Wanderers an instant second wind, but it wasn’t enough to get them over the line.

The lively Kamau made a late run into the box to prod home a Daniel Wilmering cross on the hour to reduce the margin to 2-1.

However, a stack of other half-chances and close shaves were either blown by the home side or foiled by some gutsy last-ditch defending.

Delianov used his legs to foil Duke after Kamau played him into a one-on-one opportunity. Ten minutes later, Duke was again denied by a desperate Javi Lopez tackle at the back post when he seemed destined to tuck home a cross from Kamau.

Adelaide responded with the ultimate sucker-punch, when Pacifique Niyongabire unlocked Toure and the 16-year-old’s calm finish made it a bridge too far for the Wanderers, despite their furious late rally.