The spotlight is about to turn on the 33rd edition of the Africa Cup of Nations (AFCON).

The deafening noise of the vuvuzelas is accompanying the last hours preceding the kick-off. Cameroonians play and shake them everywhere in the streets of Yaounde.

The vuvuzelas are coloured green, red and yellow like the hundreds of the country’s flags of different sizes that are waving around the city.

‘Fifty years later, it’s time to reintroduce ourselves to the world,’ tweeted Samuel Eto’o, the new president of the Cameroon FA, who was instrumental in ensuring that the cup wasn’t postponed again at the moment of maximum pressure from European clubs, which were reluctant to release their African players. 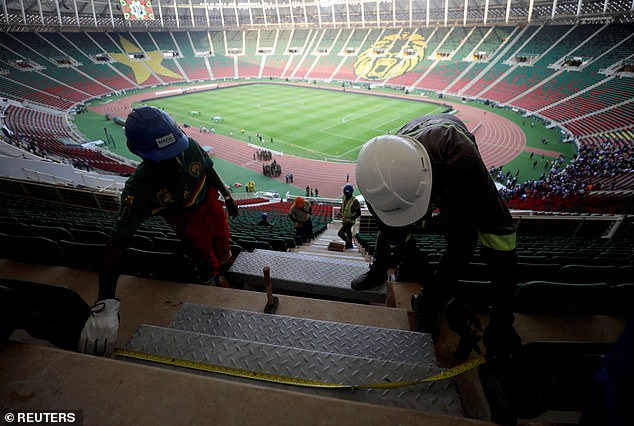 Work is still going on inside the Olembe Stadium, which is set to host the opening match

Many locals said that AFCON is their biennial party and they want to enjoy it as Europeans and South Americans did last year for their respective continental tournaments. ‘Cameroon is ready,’ they added. But the enthusiasm they are showing doesn’t exactly match the reality of the situation.

On Saturday, at the Olembe stadium, which will host the opening game between Cameroon and Burkina Faso, many workers were still working to complete the preparations.

Some, apparently exhausted, were sleeping in the shade, lying on the ground on thin cardboards outside the stadium. Even the media centre wasn’t yet operational, but the issue related to Covid-19 tests seems to be more worrying. Even before starting, the first case of unreliable tests has already broken out. 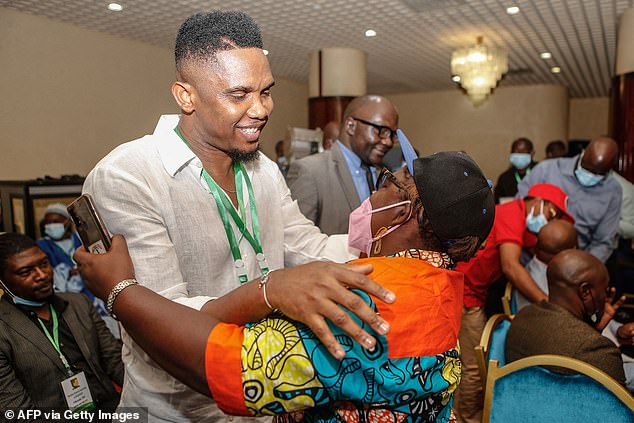 The Burkina Faso FA sent a letter of protest to the CAF’s secretary general Veron Mosengo-Omba where they traced the tests procedure carried out the night before at around 10pm by a medical team that didn’t submit any identification documents.

The tests revealed the positivity to Covid-19 of five of the playing squad and four staff members. The Burkinabe delegation had already rejected another medical team that was allegedly unauthorised, and demanded the tests to be made again in an independent laboratory in the presence of their doctors and under CAF supervision.

On Saturday, the Burkina Faso Sports Minister even threatened to boycott the opening match if CAF didn’t shed light on the issue. CAF had announced on December 16th that they would have used an independent, internationally recognised laboratory to test the national team players and their delegations, ‘with a view to ensuring objectiveness and neutrality as well as trust on all sides.’

The response sent a few hours later by the African football confederation to Burkina Faso took up that announcement and stated that the CAF disciplinary jury has ruled that ‘the tests are valid and cannot be contested.’

Very few national teams seem to have been spared by Covid-19. Some of them have been decimated and, despite the squads having been enlarged to twenty-eight players, some coaches are already studying alternative line-ups to make up for important last-minute defections. 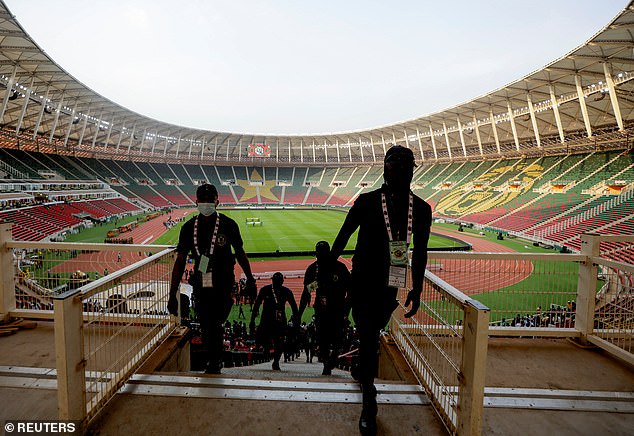 A couple above all are those of the Chelsea goalkeeper Edouard Mendy and Arsenal striker Pierre-Emerick Aubameyang.

After leading the Gabon players’ protest to ask their federation for larger prizes during their preparation stage in Dubai, he tested positive upon arrival in Cameroon and will miss the first match against Comoros.

Even if the pandemic is upsetting the plans of many national teams, and could represent the wild card of the tournament, it won’t stop the party that the Cameroonians have been preparing for since 2014, when the Issa Hayatou-led CAF awarded the country the hosting rights.

It is the second time that Cameroon hosts the tournament. The first was fifty years ago. In 1972, the tournament was supposed to serve as a promotion event for the imminent birth of the United Republic of Cameroon governed by Ahmadou Ahidjo, the former president to whom one of the two stadiums in Yaounde is named.

The other stadium, Olembe, is named after Paul Biya, the current president and Prime Minister at the time of Ahidjo. Biya, described by a taxi driver as the country’s first football fan, appears on most of the AFCON billboards hanging around the city. 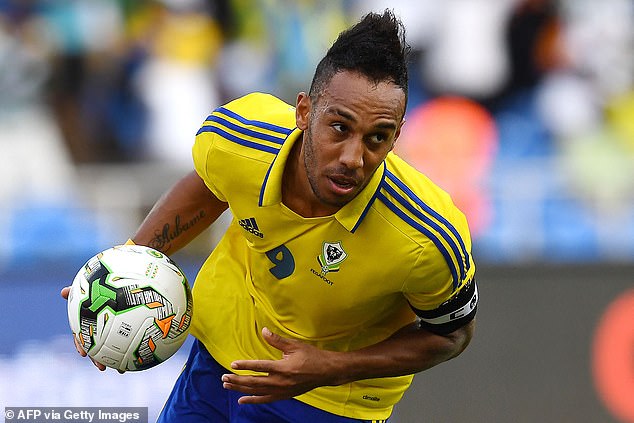 He strongly wanted to bring the competition back to his homeland. Human rights activists and separatist groups from Ambazonia (a self-proclaimed independent state that gathers the two western Anglophone regions of Cameroon) argue that the AFCON will act as a weapon of mass distraction to give a positive image of the country and not shed light on the conflict between the English-speaking regions and the central government, which escalated again in 2017.

One of the six tournament venues, Limbe, is located on the coast of the Southwest Region, where some separatist groups threatened to attack the national teams that are accommodated in the region.

Twelve years after the attack on the Togo national team in Cabinda, a separatist region in Angola, on the eve of the 2010 edition, this is a source of concern, but the Cameroonian authorities have ensured that the national teams playing there won’t run into any danger.

The clashes between shepherds and farmers that recently broke out in the extreme north of Cameroon, in the vicinity of the increasingly dried up Lake Chad, don’t seem to worry either.

The scarcity of water has caused deaths and displaced thousands. The northernmost host city, Garoua, is more than five hundred kilometers away, and is out of range of terrorist groups targeting in the area such as Boko Haram and the Islamic State of the West African Province (ISWAP). 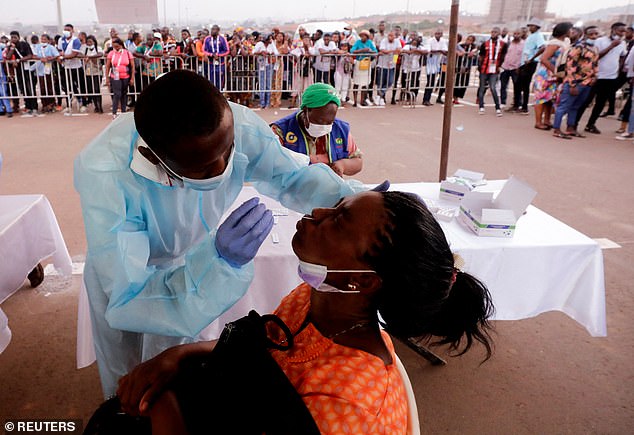 The houses where Djamel Belmadi and Aliou Cisse grew up are much less distant. The coaches of Algeria and Senegal, who faced each other in the 2019 final, are both linked to the French town of Champigny-sur-Mer and lead the two favourites sides. Algeria is probably the team to beat of the two.

Slightly behind in the hierarchies of the 2021 edition we find Morocco, the hosts of Cameroon and all the other most renowned teams such as Nigeria, Tunisia and the aforementioned Ghana and Egypt.

Belmadi and Cisse are also on the front line of the ranks of African coaches who are finally taking the stage of the main continental show. In Egypt, there were thirteen coaches with no ties to Africa – twelve Europeans and the Mexican Javier Aguirre. This year, fifteen out of the twenty-four qualified national teams have relied, by choice or necessity, on local coaches or coaches with African descent. 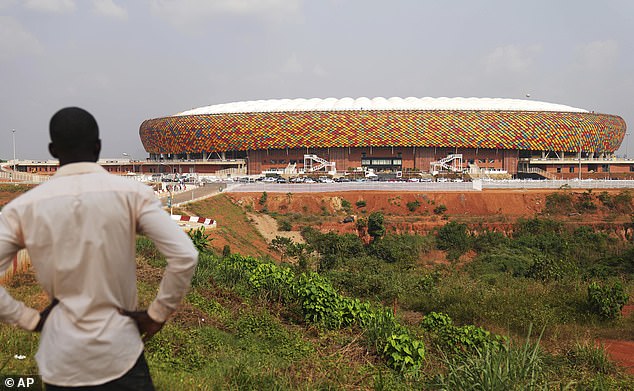 They will be able to field all the African major stars who have increasingly acquired a central role in world football and indirectly caused the clash with the European clubs, especially the English ones.

But the AFCON is also a showcase for many players who play in the minor European divisions – six are spread across the fifth divisions of England, Spain, Switzerland and France – and those who developed their career in Africa.

No matter what league standard they play in, AFCON is a showcase of all African players and people come together every two years to celebrate the continent.

That is why they will all strongly press the switch, in order for the spotlight that will illuminate African football for a month to reach the whole world.