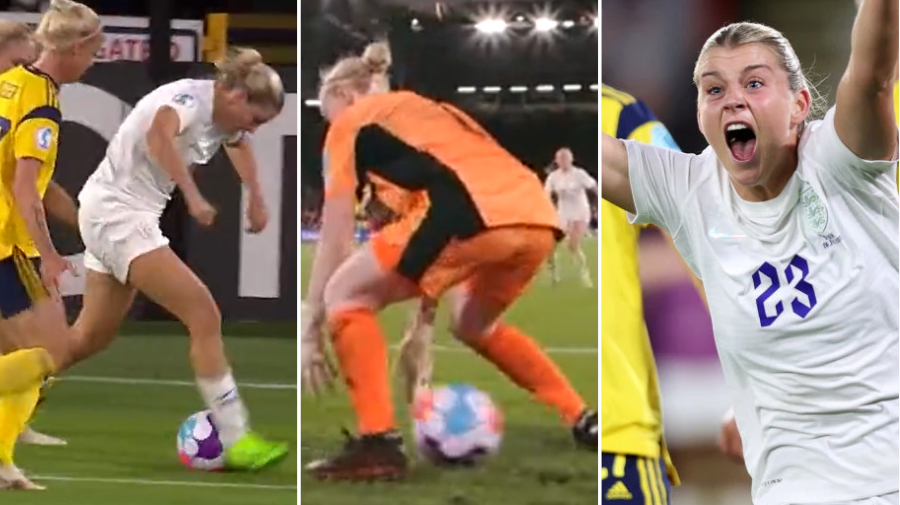 Sarina Wiegman praised the ‘courage’ of England super-sub Alessia Russo after she scored a sensational backheel goal during the Lionesses’ crushing 4-0 Euro 2022 semi-final win over Sweden.

The Manchester United striker came off the bench at Brammal Lane with her side already coasting towards a place in the final thanks to goals from Beth Mead and Lucy Bronze either side of half-time.

Russo has made telling contributions throughout the tournament from the bench and did so again in the 68th minute, delivering arguably the goal of the competition so far.

The 23-year-old recovered her composure having seen a chance she should have buried from six yards saved by Hedvig Lindahl, and instinctively backheeled the ball through the legs of the Sweden goalkeeper.

‘You must have so much courage to do such an unpredictable and phenomenal thing like that,’ said Wiegman afterwards. ‘It was really nice to watch.

‘She came on and impacted the game again very well. I think also it was a point in the game where we got more and more control so that helped a little bit too.

‘She had the cutback and then she hit it first at the goalkeeper, but you must have so much courage to do such an unpredictable and phenomenal thing like that like no one could ever react on it.

Wiegman, mwanwhile, believes England have created a small slice of history with their achievement, regardless of what happens at Wembley this weeknd, in front of 28,624 fans in Sheffield.

‘You said ‘are you ready to write history’ – I think this is a little history,’ she said.

‘We said before the tournament and we still say it every time that we want to inspire the nation – I think that’s what we’re doing and we want to make a difference – and we hope that we will get everyone so enthusiastic and proud of us and that even more girls and boys start playing football.’

Nemanja Matic to leave Manchester United in the summer