Alfredo Morelos broke his scoring duck against Celtic as champions Rangers left Parkhead with a 1-1 draw and their unbeaten Scottish Premiership run intact.

Hoops attacker Mohamed Elyounoussi headed in an Odsonne Edouard cross in the 23rd minute before the Gers striker levelled in the 38th minute, also with a header.

It was his first goal against Celtic at the 15th time of asking and it proved, along with a fine performance by Allan McGregor, to be enough make it 33 league games unbeaten and keep the 20-point gap between the teams.

Interim Hoops manager John Kennedy, who stepped up when Neil Lennon resigned last month, wanted to put down a marker and his side certainly did that albeit they will have to look to next season in terms of making amends in the league.

The draw came at the end of a traumatic week for the Ibrox men in which they were knocked out of the Europa League by Slavia Prague with midfielder Glen Kamara claiming he was subject to a racist slur by Ondrej Kudela.

Celtic skipper Scott Brown had a quick word with Kamara in the build-up and the Hoops players, like their Ibrox counterparts, chose not to take the knee before kick-off in support of the Finland international.

Substitutes, management and backroom staff of both clubs stood along the touchline in solidarity.

Traditional rivalries then commenced, albeit it was unusually tame in the early stages. 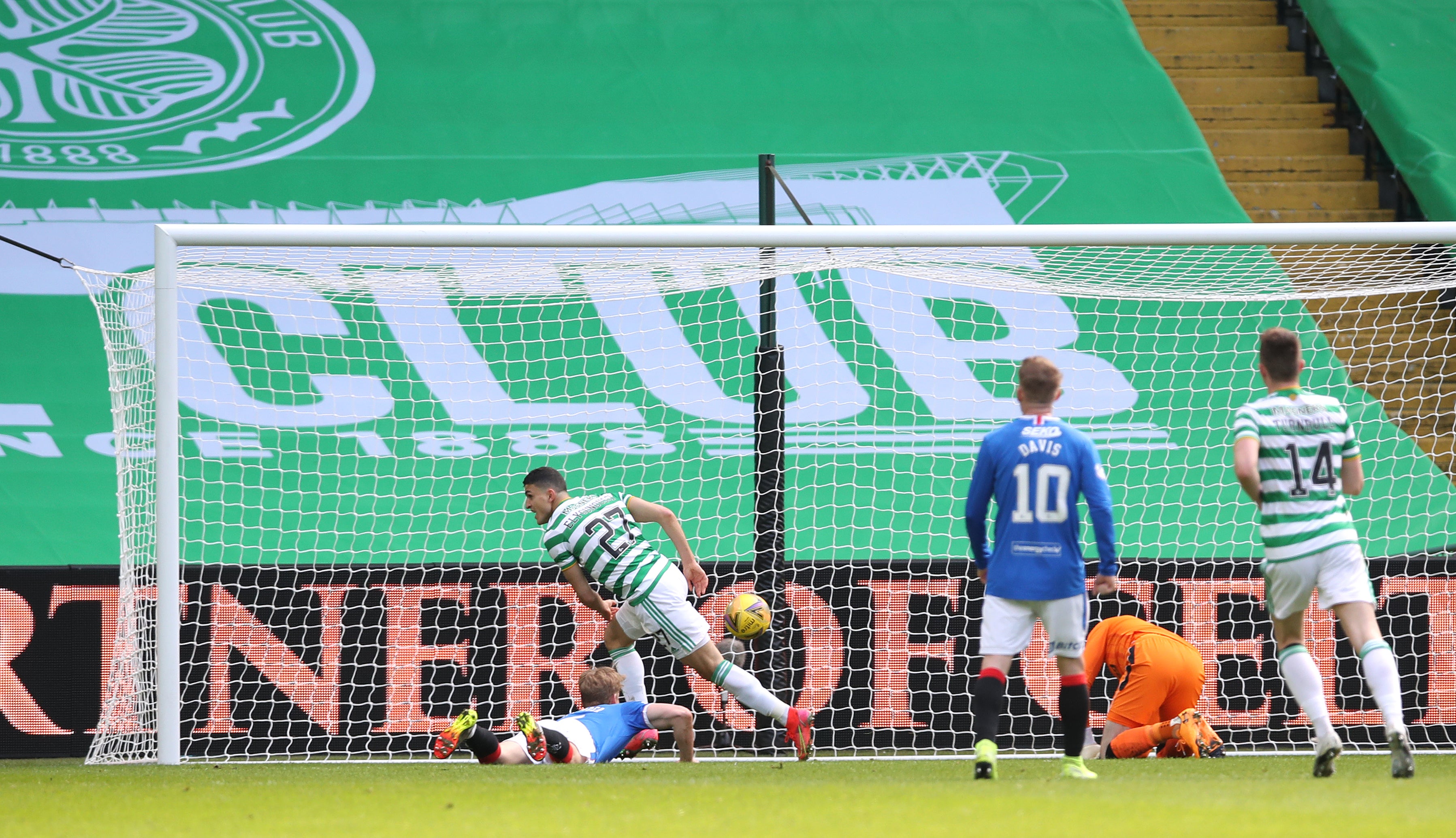 The visitors, with Filip Helander and Ianis Hagi in for Nathan Patterson and Scott Arfield, started confidently enough but gradually Celtic, unchanged, began to impose themselves.

Callum McGregor, after working a one-two with defender Stephen Welsh, cleared the bar with a drive from the edge of the box.

The Parkhead midfielder was involved in the goal, sending Edouard down the left flank with a pin-point pass and when the Frenchman flighted the ball across the six-yard box past Helander, Elyounoussi’s header beat McGregor.

As Celtic took control, referee Willie Collum booked Edouard for diving in the box after a sliding challenge by Gers left-back Borna Barisic before Ibrox keeper McGregor had to block a close-range drive from his Celtic namesake with his foot.

Then Rangers struck. Morelos’ landmark goal came after right-back Jonjoe Kenny’s long back pass to keeper Scott Bain went out for a corner.

Barisic’s out swinging delivery was headed on by defender Leon Balogun and the Colombia striker nipped in at the back post to head into an empty net.

A flurry of activity followed. Edouard was played in by Elyounoussi but McGregor stopped the striker’s close-range shot at the second attempt, and at the other end, Bain saved a drive from Ryan Kent.

McGregor then saved an Elyounoussi header from a David Turnbull corner as Celtic finished the half strongly. 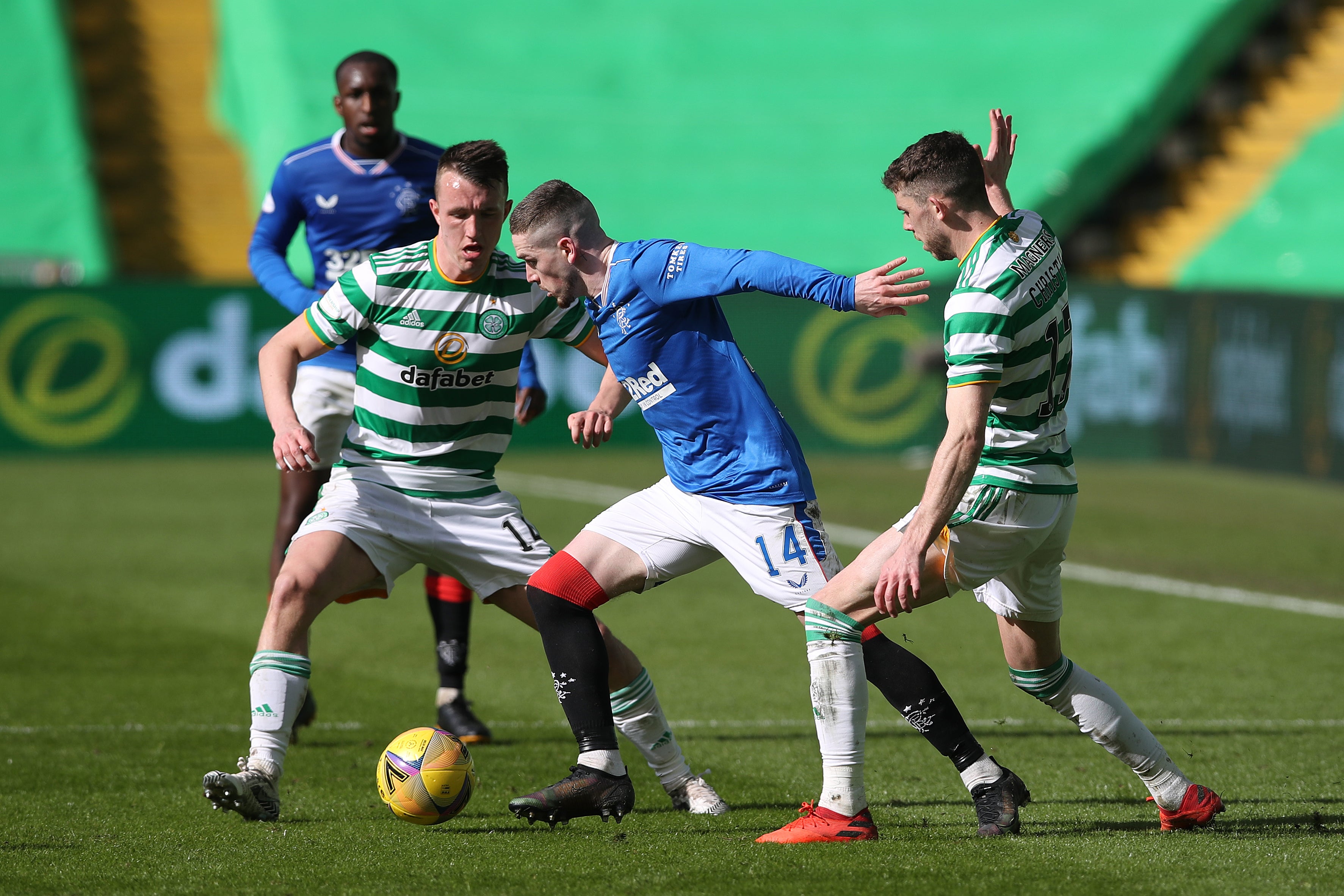 An early second-half corner from Turnbull was headed over by Welsh and McGregor dived to keep out a 25-yard drive from Edouard.

Patterson replaced Balogun and Arfield soon came on for Hagi by which time the home side were pushing hard to regain their lead.

Celtic racked up more chances. In the 71st minute McGregor used his foot again to deny Turnbull’s low angled-drive before Edouard headed the corner over the bar.

Kemar Roofe replaced Morelos and Scott Wright came on for Joe Aribo as the visitors, who were offering little in attack, tried to get a foothold in the game.

Celtic substitute James Forrest took over from Turnbull and Tom Rogic came on for Elyounoussi before Edouard missed a cross from Kenny by inches, another change going a-begging for the home side.