The A-League’s all-time top scorer, a Johnny Warren medallist, six of this season’s top 10 goal scorers and the league leaders’ entire defence are among the 168 players coming off-contract at the end of this season in a record year for player contract instability.

Nearly 70 per cent of A-League players do not yet know where they will be playing beyond June as uncertainty over next season’s calendar, collective bargaining agreement and a new broadcast deal has threatens mass squad upheaval across the competition. 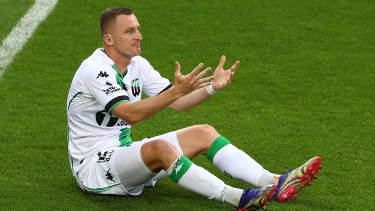 All-time A-League top scorer Besart Berisha is among those coming off-contract at the end of this season.Credit:Getty Images

The newly independent A-League is yet to secure a TV deal for next season but the chances of the league moving into winter appear to have dimmed, after the Herald yesterday revealed potential broadcasters almost unanimously prefer a summer competition. That uncertainty, however, has contributed to a reluctance from clubs to offer long-term deals to players at a time when the next salary cap remains undefined.

An average of 14 players are coming off-contract at each club. Adelaide and Newcastle have the fewest off-contract players, with 10, while Perth Glory have 20 players in the final months of their deals.

The Australian players’ union, The PFA, informed the Herald they have never experienced such a large volume of players coming-off contract in a single season with the long list including rising stars and some of the competition’s biggest names.

Besart Berisha is one of the most notable, the A-League’s all-time top scorer is off contract with Western United in June. The 2016 player of the year, Diego Castro, is yet to renew his deal with Perth while young Brisbane Roar striker Dylan Wenzel-Halls will have no shortage of offers from rival clubs, having already scored six goals in the final year of his contract.

Perhaps one of the biggest concerns any one club faces is Central Coast Mariners’ hopes of keeping their entire defensive unit. Goalkeeper Mark Birighitti and defenders; Ruon Tongyik, Kye Rowles, Stefan Nigro and Jack Clisby have started every game for the surprise league leaders this season but the quintet are yet to extend their stay with the club. 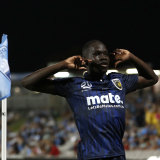 Rising star Alou Kuol is set to pen a new deal with the MarinersCredit:Getty

One of the names that is not no longer on the off-contract list is that of Central Coast Mariners’ in-form striker, Alou Kuol. In a major coup for the Gosford club, the 19-year-old Kuol rejected offers from a host of rival clubs and opted to remain with the club that gave him his professional debut, agreeing to a contract extension that ensures he will remain on the Central Coast next season. Kuol has been one of the stars of the Mariners suprise form, netting six times in 12 appearances this season. 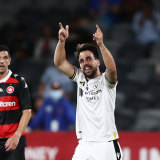 Macarthur star Benat Etxebarria is yet to sign a deal for next season.Credit:Getty 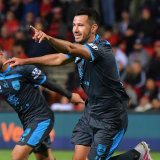 Socceroo Ryan McGowan is off-contract with Sydney FC in June.Credit:Getty

EDDIE GRAY: No one struck the ball like Peter Lorimer