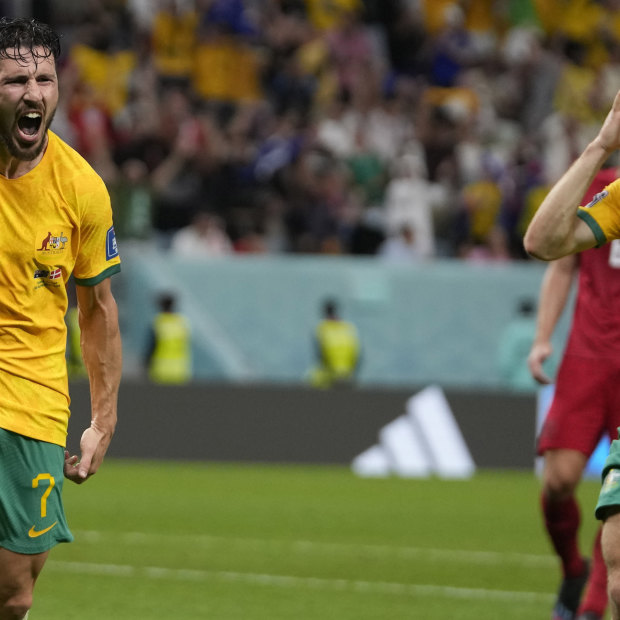 It was a goal heard around the world and sent the Socceroos into the final 16 of the World Cup for just the second time in history, so how did Mat Leckie do it?

The goal which crowned Australia’s ninth individual World Cup scorer started in the Socceroos’ own box with a familiar figure.

Within 15 seconds, the ball was rolling into the corner of Kasper Schmeichel’s Denmark net.

The sight of Christian Eriksen, one of the world’s most creative players getting his foot on the ball on the edge of the Socceroos’ box would normally spell trouble. 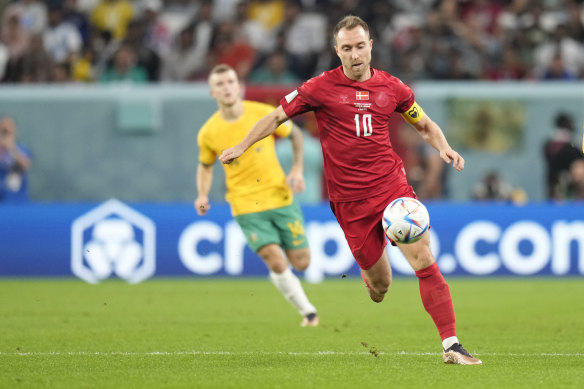 Only this time it preceded a near length-of-the-field counterattack. Eriksen rolls the ball into the feet of Kasper Dolberg, and he immediately anticipates a return pass.

Like he did against Tunisia with a long ball which found Mitch Duke’s feet near halfway, the colossal Harry Souttar again started the move which led to the Socceroos’ goal.

With Eriksen’s ball making Dolberg stretch a touch, Souttar dispossesses the Danish star, who had only been on the field for a minute, and then has the confidence and composure to take a couple of touches out of his own box. 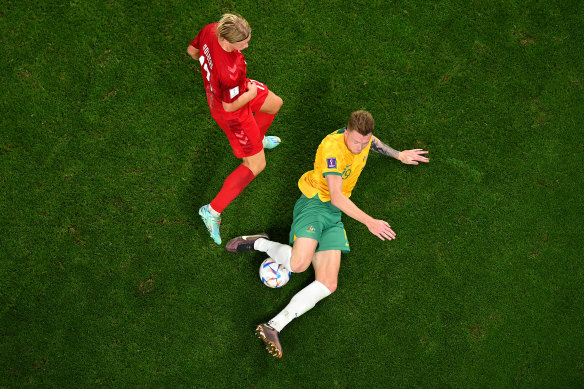 Leckie’s goal started at the other end of the pitch, and again it was towering defender Harry Souttar who won the ball.Credit:Getty Images

If you thought you’d seen this before, it’s because you have.

Just as in the Tunisia game, Souttar looked for an outlet centrally and found tireless Socceroos striker Mitch Duke, who again had his back to the opponent’s goal inside his own half.

But like he’s done so many times this tournament, Duke cushioned the ball perfectly with his right foot so Australia could keep possession. While his beautiful touch against Tunisia was a first-time deflection off the outside of his right foot, this time he took a second to keep the ball himself. 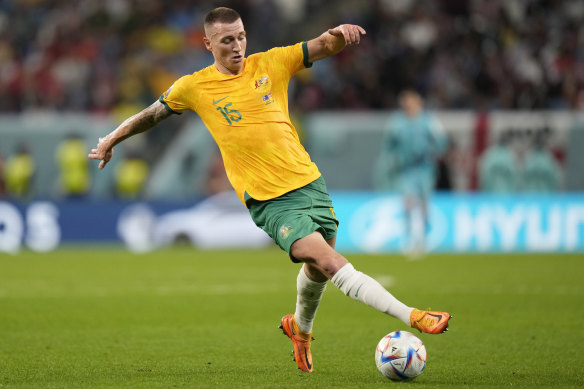 Australia’s hero against Tunisia, Mitchell Duke, was also central to the Socceroos’ fortunes on Thursday.Credit:AP

McGree finds space on the left

Graham Arnold’s tactical change to move Riley McGree to the left side of midfield in the second half and push Jackson Irvine further up the field pays dividends, with Duke’s pass creating the space to expose the Denmark defence.

This time, Duke releases the ball with his left foot to find McGree, and Irvine allows the ball to roll through his legs sensing his teammate is in space on the left flank, albeit still inside the Socceroos’ half with Denmark’s full-backs caught out of position as they desperately search for a goal.

McGree has been asked to do an enormous amount of running and work at the top of Australia’s midfield, but his touch and quick thinking shows why he’s carving out such a successful career with Middlesbrough in England’s second tier.

He takes only one touch with his left foot to control the Duke pass and then immediately gets his head up to see what’s in front of him, and Leckie makes an angled run from the right inside his own half. McGree releases the pass beyond Joachim Andersen at the precise moment, with Leckie still inside his own half meaning he can’t be ruled offside. 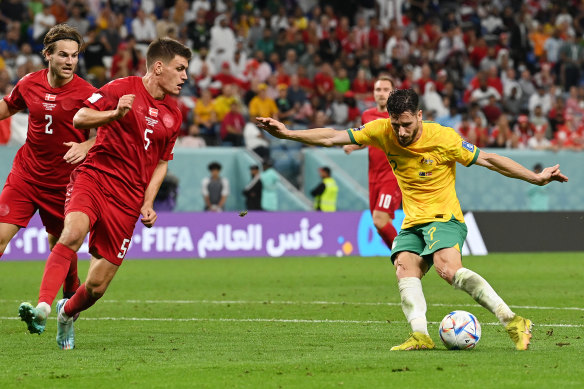 Mathew Leckie unleashes the shot which sent Australia to the knockout stages in Qatar.Credit:Getty

For all his stellar service for the Socceroos over many years, the one small criticism of Leckie has been his ability to regularly produce the end product with either a lethal pass or goal of his own.

Australian fans would be happy they’ve waited this long for the Melbourne City man to deliver on the biggest stage.

The 31-year-old picks the ball up just beyond the centre circle on Denmark’s side of halfway with just defender Joakim Maehle in front of him. Leckie takes the pass in his stride with his right foot and twice gets his head up to see if support is arriving behind him to the right, but quickly realises it won’t be there in time.

He first turns Maehle on the edge of the Danish box, caressing the ball onto his right foot, but then cuts back with a sharp turn and then another touch to get on his left side.

The shot heard around the world

The first time Leckie touches the ball with his non-preferred left foot in the whole movement is the shot, which from 14 yards is angled towards Schmeichel’s far post. There’s a touch of fortune involved, but doesn’t everyone need it?

Mathew Leckie gets the better of Danish gloveman Kasper Schmeichel.Credit:Getty/AP

The strike rolls between Maehle’s legs and Schmeichel, the son of legendary Manchester United goalkeeper Peter, can only watch in despair as his dive is helpless. The ball rolls inside his left post and into the side netting.

Not that they knew it at the time as Tunisia stunned world champions France, but the move which started in Australia’s own box and ended in Denmark’s was the difference between history and another group stage World Cup exit.

Watch every match of the UEFA Champions League, UEFA Europa League and UEFA Europa Conference League on Stan Sport. Returns for the Round of 16 in February 2023, with all matches streaming ad-free, live and on demand.

Rashford’s message to government after ‘great conversation’ with Boris Johnson