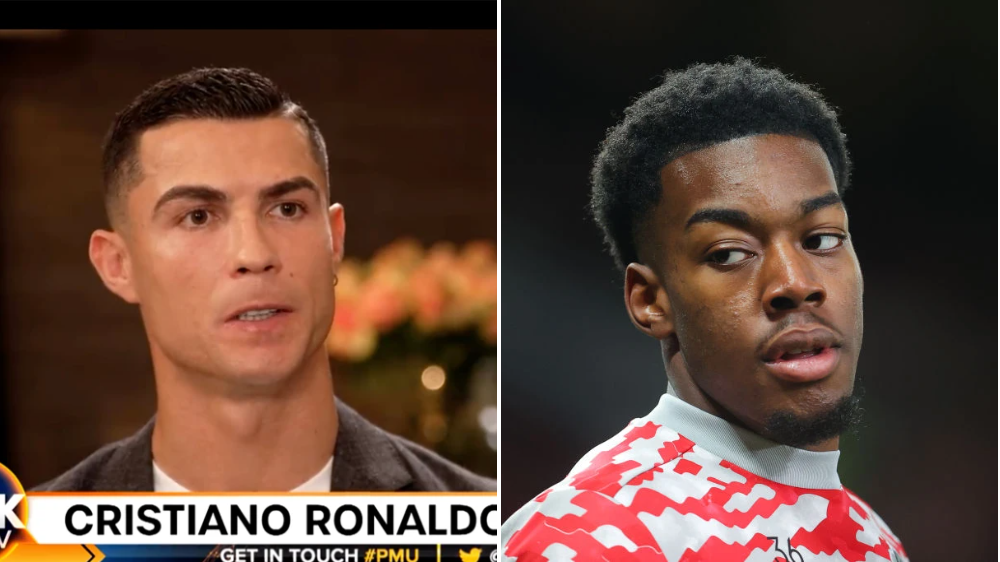 Anthony Elanga says he ‘understands’ Cristiano Ronaldo’s criticism of young players and insists he still idolises the Manchester United striker despite his comments on the club.

Ronaldo has surely played his last game for the Red Devils after hitting out at Man United, the Old Trafford owners, multiple club legends and even his own team-mates in a sensational interview with Piers Morgan.

The 37-year-old surpassed 700 club goals earlier this season, has won five Ballon d’Or awards and is considered one of the best players in history.

Ronaldo is renowned for his discipline and professionalism but claimed to Morgan that the next generation lack his mentality.

‘I don’t think that word [respect] is the best one, they live in a different era,’ Ronaldo said of his younger team-mates. ‘I can see with my kid, who is 12-years-old, the mentality is not the same.’

Asked about the difference between United’s young players and players his own age, Ronaldo added: ‘The hunger. They have things more easily.

‘Everything is easy. They don’t suffer, they don’t care. I don’t mean just Man United, but all teams. They are not the same as my generation.

‘But we cannot blame them. It is part of the life of the new generation, the new technologies which distract them from other things.

‘They are not the same. They listen, but they hear one side [and it goes out the other ear]. It doesn’t surprise me, but it is a shame.

‘If they have the best examples in front of them, if they don’t at least copy what you did, it’s kind of weird.

‘I remember when I was 18, 19, 20, I was always looking to see the best players – Ruud van Nistelrooy, Rio Ferdinand, Roy Keane, Ryan Giggs – this is why I have had the success I have had and the longevity, because I take care of my body, my mentality, my head, that’s because I saw those guys and learnt from them.

‘I think the best advice… I’m not the kind of guy who likes to give advice, I like to lead from example. I’m there every morning, I do the same stuff, I’m probably the first person to arrive and the last one to leave.

‘They listen to one thing, and in two minutes they have already forgot. I like to lead by example. Some follow me, not much…

‘They don’t care. Some ones yes, but most of them no. To me it is not surprising. They are not going to have longevity in their careers.

‘It is impossible. My generation you see players at 36, 37, 38 playing at a high level. I don’t think many in this [new] generation are going to reach that level.’

Elanga, 20, says he ‘understands’ Ronaldo’s comments but insists he does not fit into the category of ‘not caring’.

The Sweden international enjoyed a breakthrough season at Old Trafford in 2021-22, often keeping Marcus Rashford out of the team.

Elanga told Swedish outlet Aftonbladet: ‘Cristiano talks about young players in general. We are a new generation. I am always 100% focused on what I am doing, but I can understand what he is saying.

‘There are a lot of phones and a lot of technology. It’s quite easy for young players to get distracted and lose focus. I always focus 100% on my job and what I do. Young players at United are listening, but I can understand what he is saying.’

On his relationship with Ronaldo, Elanga added: ‘He means a lot to me. He has helped me a lot not only on the pitch but off it as well.

‘He is an inspiration, not only to me but to all the young players at United. Sometimes it’s just me and him at the gym.’

Asked if his opinion on Ronaldo has changed since his explosive interview, Elanga responded: ‘No, not so much. Because when I’m with him, he hasn’t changed. He is still Cristiano Ronaldo to me. He has helped me a lot.’