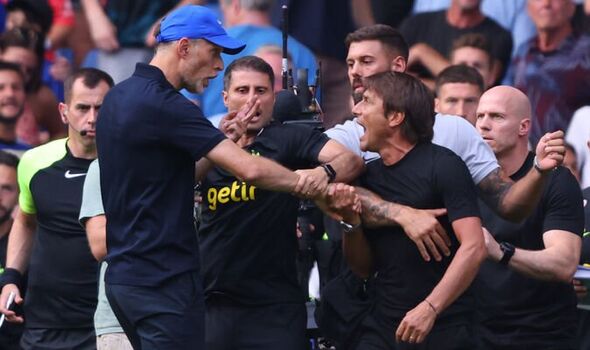 Antonio Conte and Thomas Tuchel have both been charged by the Football Association for the touchline brawl that followed the full-time whistle after Chelsea’s 2-2 draw with Tottenham. The managers were furious with each other after an attempted handshake that followed a 2-2 draw full of controversy.

Both head coaches now have until Thursday to provide their responses to the FA charge.

An FA spokesperson said: “Thomas Tuchel and Antonio Conte have both been charged with a breach of FA Rule E3, following the Premier League fixture between Chelsea FC and Tottenham Hotspur FC on Sunday 14 August 2022. It is alleged that the behaviour of both managers was improper following the end of the fixture. Thomas Tuchel and Antonio Conte have until Thursday 18 August 2022 to provide their respective responses.”

Both managers attempted to shake hands after the game but appeared to hold on to each other’s hand for too long following a fiery affair. in his post-match interview, Tuchel accused Conte of not looking him in the eye and was seen gesturing this to the Italian during the incident.

Tempers had flared earlier in the fixture when Chelsea felt that Spurs’ first equaliser should not have counted. Kai Havertz appeared to be fouled by Rodrigo Bentancur in the build-up to Pierre-Emile Hojbjerg’s strike.

Conte and Tuchel were both booked following that incident, along with a member of each team’s coaching staff. Chelsea went ahead again through Reece James’s goal but Harry Kane equalised in the 96th minute.