Senior Socceroos players are set to meet in the coming weeks to discuss how the squad might protest Qatar’s terrible human rights record ahead of the Middle Eastern nation’s hosting of the 2022 World Cup.

In June the Socceroos will resume an arduous and compressed qualifying campaign for the 2022 World Cup, with senior player Jackson Irvine saying that prior to meeting in camp there will be a discussion about what the team can do to support the plight of migrant workers in Qatar. 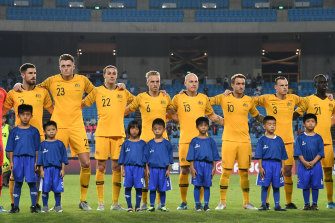 The Socceroos will discuss the human rights situation in Qatar.Credit:Getty Images

“Whenever you go and play in any country the political and human aspect of those places is called into question in a lot of ways,” Irvine, who plays for Hibernian in the Scottish city of Edinburgh said. “It can raise some moral dilemmas.

“We are going to meet together, a few of the older players as a group, to talk about how we want to approach it as a squad.

“Fair play to the countries who have made their statements early on.” 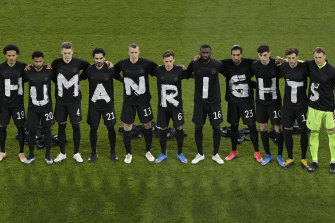 Irvine said the World Cup was the biggest stage in sport, and that he hopes soccer can continue to be used to bring such issues to the forefront of the public’s minds.

“All you can hope now is these countries and players and teams will be applying a bit of pressure to make some changes.

“There’s still another 18 months until the World Cup, there’s a lot to be done, so there’s a chance to maybe apply a bit of pressure there and see how that effects things moving forward.

“That’s becoming more and more important whether it is racial equality, equality across the board, players are now in a position to make those statements more publicly and draw more awareness to these things.”

The pandemic has meant the Socceroos have not played or been together since they beat Jordan 1-0 in a November 2019 World Cup qualifier.

In June the Socceroos will go to Kuwait and enter a “bubble” to play four World Cup qualifiers in just over two weeks.

“We are all honestly itching to be back,” Irvine said.

“Every international break has been painful seeing the internationals from Hibs go away and play those games. For us to not be together for nearly two years it has been so crap, basically.

“We are about to go into the most hectic period the Socceroos will ever have with something like 14 games in qualifiers in nine months … a bubble in the Middle East in June will be a tasty experience in its own way.”