Home » Soccer » Arsenal 1989: The making of the team that won the title at Anfield 31 years ago It was hailed as the greatest climax to the title race in English football history. May 26, 1989, the night Arsenal snatched the title from Liverpool with virtually the last kick of the season.

It was the last match of the 1988/89 season. Arsenal, three points behind leaders Liverpool, had to win by two clear goals to clinch the title, and 18 million viewers tuned in to see who would be crowned champions.

What transpired would go down in English footballing folklore as Arsenal dreams were realised in thrilling fashion thanks to Michael Thomas’ stoppage-time clincher.

Thirty-one years on, this is the story of those involved on that unforgettable night at Anfield and how plans to forever immortalise the match culminated with creation of the documentary ’89’.

‘The pressure was on’ 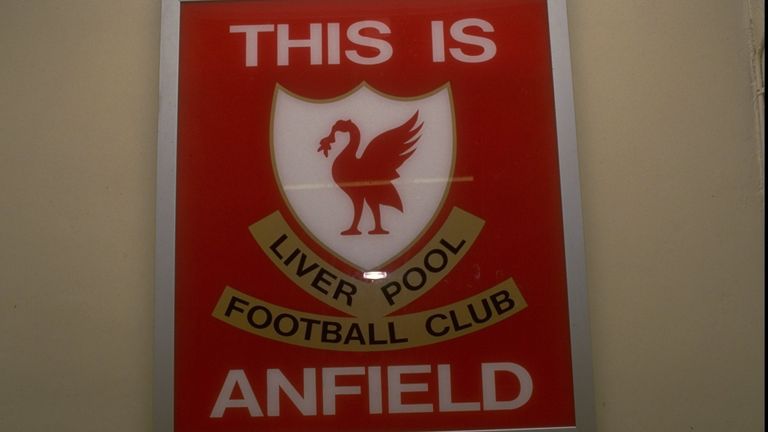 The scale of the task placed in front of Arsenal was at best sizeable and at worst nigh-on impossible. The all-conquering Liverpool side of the 1980s simply didn’t lose at Anfield, let alone by the two-goal margin Arsenal required.

“They were just rattling off win after win after win and they weren’t 1-0 wins, they were winning convincingly by three or four,” Arsenal midfielder Thomas said. “They had the whole of the nation behind them – and rightly so – and the pressure was on us.” The last few weeks of the 1988/89 season had been overshadowed by the tragedy at Hillsborough, meaning the meeting of the two title rivals was postponed until the end of May.

Before a ball had even been kicked at Anfield, Arsenal ensured they paid their respects to the 96 supporters who sadly lost their lives, as Gunners manager George Graham recalls.

“It was a great gesture by Ken Friar, one of the bosses at Arsenal, to have the players go out with a bouquet of flowers and throw them to the Liverpool fans. It was a fantastic gesture.”

All square at half-time 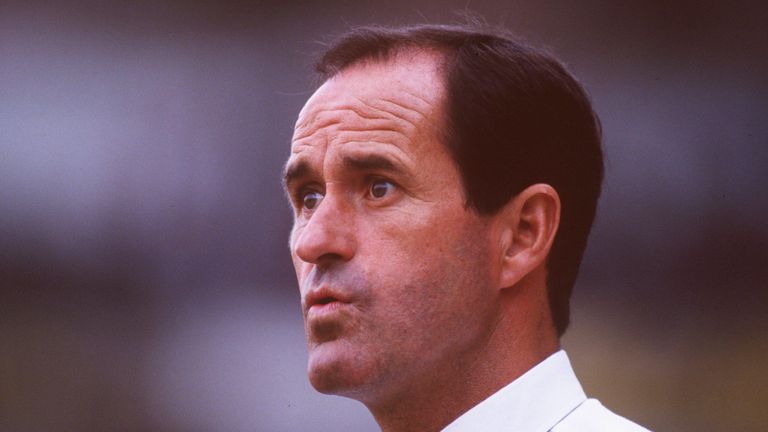 Though the first half was keenly contested there were few clear-cut chances. Both sides seemed reluctant to over-commit as they went into the interval with the scoreline locked at 0-0, and it was all part of the tactical master plan of Graham and Arsenal.

“Everybody was telling me that you’ve got to go up there and, from the word go, go out and attack them,” Graham said. “I said ‘no, we’ll try to be cautious’. The only thing I didn’t expect was that Liverpool would think the same.

“I said they’re going to be nervous if we score and they’re going to have to come at us. I said we’ll then get the second and, with a bit of luck, we might even get three. Anyway, they all looked at me as if I was crazy!” Free-kick routine pays off for Smith

Early in the second half Arsenal were awarded a free kick outside the Liverpool penalty area, as Alan Smith recalls.

“We practised that free kick so much in training and used it so many times in matches but it never came off,” Smith said. “We thought ‘oh no – we’re not going to try this one again!'”

This time it did work. Smith converted Nigel Winterburn’s delivery with a glancing header. Liverpool’s players surrounded the referee in protest.

“We were all convinced that the referee was going to disallow it having spoken to the linesman,” Smith added. “When he’s pointed to the centre circle you’re thinking ‘wow, we’ve got the first goal here’.”

Arsenal feared their chance had come and gone when Thomas prodded a shot straight at the Liverpool ‘keeper Bruce Grobbelaar late on.

“I thought I had players both sides of me,” Thomas recalls. “I see it now on the TV and I had plenty of time to bury it. I panicked. I didn’t panic the second time!” Luckily for Arsenal, and Thomas, they had one final opportunity. Goalkeeper John Lukic threw the ball to Lee Dixon in space. Dixon’s pass out of defence then found Smith, who brought the ball down with exquisite control before lofting it forward in search of Thomas.

“I’ve just seen this yellow blur in my peripheral vision,” Smith said. “It was Michael making one of those barnstorming runs.”

When the ball bounced kindly for him via a deflection from Steve Nicol, Thomas found himself through on Grobbelaar’s goal, as the midfielder recalls.

“Then, as I said before, I’m thinking about Bruce [Grobbelaar], how great a goalkeeper he was, and I waited for him to make the first move. Once he did that, that was me, I knew what I was doing.”

90+1: Barnes drives into the Arsenal penalty area as the Gunners ferociously hunt the ball down.

It’s exactly where Liverpool want the ball as they look to hold on to claim the Championship.

Richardson eventually gets a foot to the ball to get the ball back to Lukic. There can only be seconds remaining. Arsenal need a goal…

90+2: Arsenal stream forward. Is this to be Arsenal’s final attack? It must be…

Lukic bowls the ball out to Dixon. Dixon clips an excellent ball to Smith, who is 40 yards from the Liverpool goal. As he’s done all evening, he holds the ball up brilliantly, taking a touch before hoisting the ball forward.

Thomas takes the ball in his stride. He charges through the midfield, evading the challenge of Nicol. The midfielder’s in on goal… IT’S UP FOR GRABS NOW…

He bursts into the penalty area, takes one touch and faints to shoot before lifting the ball over the on-rushing Grobbelaar and into the back of the net.

There are wild celebrations. There’s a forward roll and a jog on the floor from Thomas, while Winterburn runs away from his team-mates to celebrate with the Arsenal fans.

It’s Arsenal who are now just seconds away from winning the Championship. Thomas lifted the ball over Grobbelaar. Arsenal had their two-goal lead. Liverpool had no time to react. At the final whistle George Graham’s side celebrated Arsenal’s first league title triumph since 1971, and it’s a proud moment for all involved.

“I feel very proud about that moment, what I’ve achieved in the game and the fact that I achieved it with the players I grew up with in the Arsenal youth team,” Thomas said. “The only person I miss to share that moment with is David Rocastle because we grew up playing schoolboy football together in south London schools. Sadly he passed but we miss him deeply – very deeply.”

Smith added: “I remember sitting back in the dressing room, sipping on a little cup of champagne and somebody said `lads, we might as well retire now, it’s never going to get any better than this. And when you think about it, it’s not. How can it get any better that that?”

To mark the 31st anniversary of their title-winning triumph, former Arsenal team-mates Alan Smith, Paul Merson and Lee Dixon, who was an executive producer for ’89’, sat down with Geoff Shreeves to explain the importance of documenting that unforgettable night at Anfield… 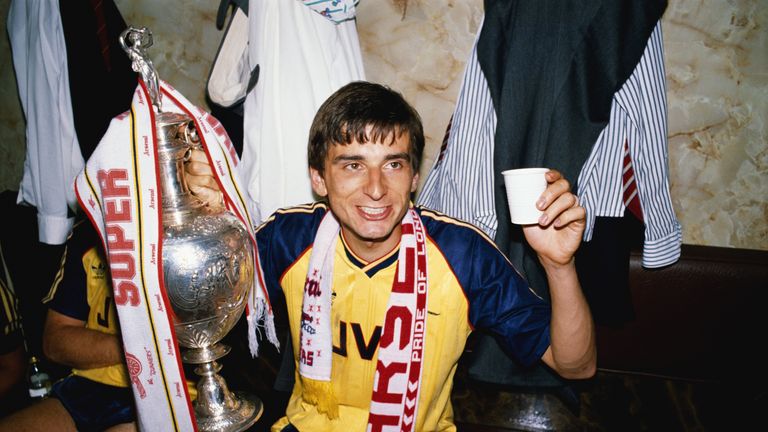 Alan Smith: “Up until the point the documentary had been made, it was the greatest story that had never been told. When you start talking about it again, you remember things you thought you had forgotten, you see the boys and they tell you their memories and that triggers something in your mind. It was special to all of us

“It’s something that could never be repeated. To go back to those days, which were a long time ago, and the way in which the film got a sense of the 1980s was great. We were delighted it came out so brilliantly well and captured drama of not only the night but the season as well.” 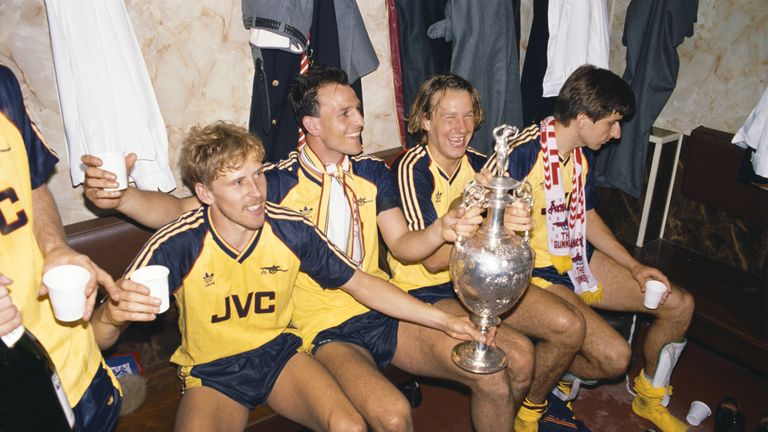 Paul Merson: “I was pleased when I got the call to do a couple of interviews for the documentary because I felt the game had been brushed under the carpet a bit. It wasn’t appreciated as much as it should have been, Arsenal should have marked it every time it came around.

“To be the best team of the time was such a massive thing. It will never be done again. People talk about the Sergio Aguero situation, but it doesn’t even add up to it. [In 89] it was two of the top teams, first versus second, on the final game of the season.

“There was such camaraderie in that team. When we got on that pitch together, everybody worked hard for each other. I’m very grateful that the documentary was made because we’ve got memories now. The film came out and we’ve also got that to show to the kids and grandchildren.”

‘Documentary applies colour to the painting’ Lee Dixon: “The Aguero moment was an unbelievable situation, but when people start talking about it in the same way as ’89, I glaze over. If you compare the two, game by game, the importance of each game, they are not even in the same ballpark. That moment at Anfield will never happen again as long as we are on this planet, that is what makes it so special.

“Making the documentary was brilliant because I had my own memories, my own version of what happened on the night, but we would ask the lads what they thought about all of the subjects we covered, and they were slightly different.