Report as Pierre-Emerick Aubameyang scores his fifth goal in four appearances for Arsenal; Hector Bellerin scores the other in entertaining Emirates clash; Pascal Struijk and Helder Costa scored for Leeds as Arsenal leapfrog them into 10th 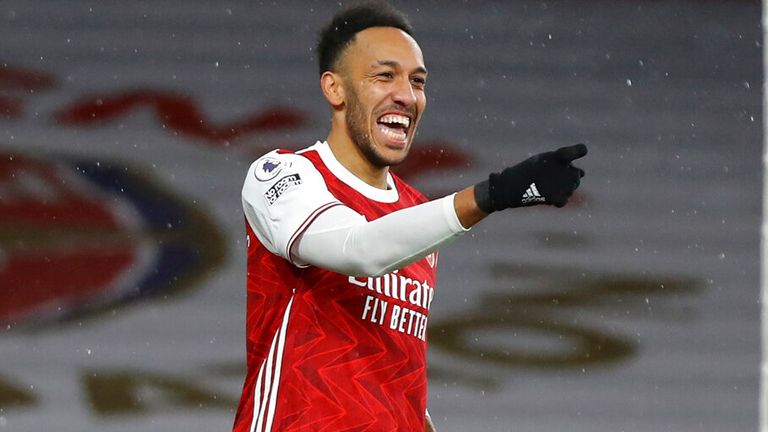 Pierre-Emerick Aubameyang’s first Premier League hat-trick guided Arsenal to a 4-2 victory over a leaky Leeds at the Emirates despite the visitors’ late rally.

Arsenal were 3-0 up at half-time for the first time in the Premier League since February 2018 as Leeds crumbled, and it was Aubameyang, who has now scored more goals in his last four Premier League appearances (5) than he had in his previous 16, benefiting most.

First, Aubameyang’s clever, flash finish into the near post from 15 yards (13) put Arsenal ahead, before the Gabon striker doubled his and the Gunners’ tally with a penalty after goalkeeper Illan Meslier mistake, dwelling too long on the ball before fouling Bukayo Saka (41).

Hector Bellerin’s first goal of the season made it 3-0 on the stroke of half-time, again finishing at the near post following superb Arsenal interplay in the box (45), and Aubameyang got his hat-trick after the break with a far-post header from Emile Smith Rowe’s cross-shot (47).

As ever with Leeds, there was entertainment at both ends as Marcelo Bielsa’s side caused a scare, halving the deficit through Pascal Struijk’s bullet header (58) and sub Helder Costa’s close-range finish (69), but Arsenal saw the game out.

The result means Arsenal leapfrog Leeds into 10th, though Leeds are two points behind with a game in hand.

Arsenal now face Benfica in the Europa League round of 32 first leg on Thursday at 8pm, before hosting Man City on Super Sunday at 4.30pm, live on Sky Sports Premier League.

Leeds now go to Wolves in the Premier League on Friday night at 8pm, before hosting Southampton on Tuesday February 23 at 6pm, live on Sky Sports Premier League.