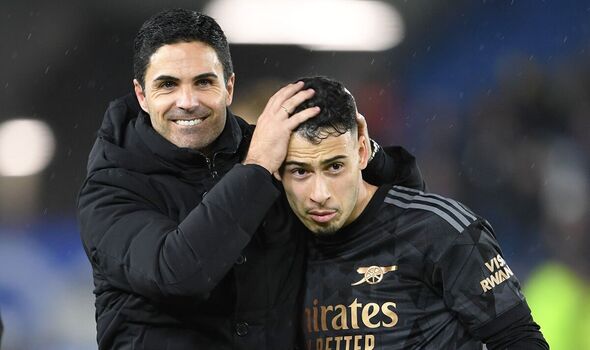 Arsenal continue to surprise the majority as they strengthen their Premier League title chances with each passing game. Mikel Arteta’s side have now achieved a feat which would usually guarantee they finish top come the end of the season.

The 4-2 win over Brighton on Saturday moved the Gunners to seven points clear of second-placed Manchester City. Pep Guardiola’s side had earlier dropped points at home to Everton.

City are still favourites in many people’s eyes to win their fifth title in six seasons. But it appears apparent that Arsenal are set to be their nearest challengers.

The victory at the Amex opened up the seven-point gap for the turn of the year. It has since emerged that no team in Premier League history have had a seven-point gap at the start of a new year and not gone on to win the title.

The caveat to that is usually more games would have been played by January 1. Arsenal have played just 16 of their 38 matches due to the break for the World Cup.

Most previous campaigns would have seen at least half of the matches having been played by this point. That hasn’t stopped Arsenal fans dreaming of potentially winning their first title since 2004.

Bukayo Saka has been one of the standout players for the north London side this season. He admits his team have a big opportunity but must concentrate on each game as it comes, starting against Newcastle on Tuesday.

Saka told Sky Sports: “[The seven-point lead] sounds amazing. Of course at the start of the season if you asked us if we wanted this we would bite your hand off. We are really happy.

“It is a great opportunity we have [to win the Premier League title] – a great place we have put ourselves in.

His manager Arteta holds a similar vein of thought to the England international. Arteta told reporters when asked about being seven points clear on Saturday: “I don’t know, it’s still a long, long run to go.

“My excitement comes when I go in the dressing room and the players are talking about what they should’ve done better today. That means they know that we still can play better, be better and against Newcastle we will have to be better.”