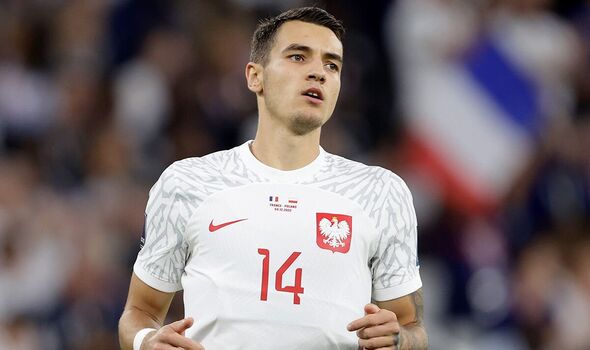 Arsenal are set to complete a deal for Poland defender Jakub Kiwior, according to reports. The Gunners are set to make him their second signing of the January transfer window after agreeing a deal for Leandro Trossard.

A deal for Kiwior has come out of the blue. But he is reported to be flying to London this weekend to complete a move to the Emirates.

Kiwior is a left-footed centre-back who plays for Serie A club Spezia. The 22-year-old started each of his country’s four matches at the World Cup in Qatar before their round of 16 exit to France.

Arsenal were unable to make any signings in the first two weeks of the January window. But they are set to complete two in the matter of a few days.

A fee rising to £27million was agreed with Brighton on Thursday which will see Trossard become an Arsenal player. But before an official announcement has been made on that deal, the Gunners are closing in on their next acquisition.

Transfer expert Fabrizio Romano says a fee in excess of £17.5m has been agreed between Arsenal and Spezia. The deal is very advanced and he could undergo his medical this week.

Meanwhile, Gianluca Di Marzio claims Kiwior will fly to London this weekend to complete his move.