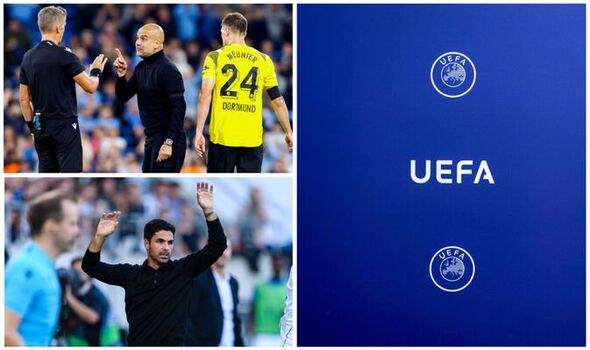 Arsenal and Celtic have been fined by UEFA for breaches of disciplinary rules during their recent European ties, while Manchester City have been handed a warning. The European football governing body has released its long list of decisions relating to matches in September, with Arsenal receiving a small fine for failing to control their spectators.

UEFA’s Control Ethics and Disciplinary Body (CEDB) met on September 28 to review the breaches by several clubs that took place in September and ruled that the Gunners were responsible to pay a £4,389 (€5,000) fine for a issue related to a fan’s “invasion of the field of play” during their Europa League tie.

Meanwhile, Swiss side Zurich have been told to pay a total of £20,010 (€23,250) for blocking of public passageways and lighting of fireworks during the same match in Switzerland on September 8.

But Premier League champions Manchester City have got off without a fine on this occasion after the club and its head coach Pep Guardiola were found to have overseen a late kick-off in their tie against Borussia Dortmund in the Champions League.

Guardiola, who was shown a yellow card at the full time whistle after bizarrely hugging match official Daniele Orsato following an argument between the pair, escaped further punishment for his row with the Italian referee but was instead reprimanded for bringing his team out late.

Another one of Man City’s group stage opponents, Sevilla, have been fined £4,389 and have been told to contact Manchester City FC within 30 days for the settlement of damages caused by its supporters. It comes after the window of City’s team bus was smashed before their resounding 4-0 win at the Ramon Sanchez Pizjuan in September.

UEFA have also fined Celtic £13,160 for an anti-monarchy banner displayed by fans during their Champions League game against Shakhtar Donetsk last month.

The organisation had asked for club to observe a minute’s silence in matches involving British teams following the death of Queen Elizabeth II on September 8, although this was scrapped for Celtic’s match against Shakhtar Donetsk.

Players instead wore black armbands as a mark of respect, but TV cameras spotted a banner unveiled prior to kick-off which read: “F*** the crown”.

BT Sport were forced to apologise to viewers after zooming in on the anti-monarch imagery and UEFA have now acted after pledging to investigate the matter.