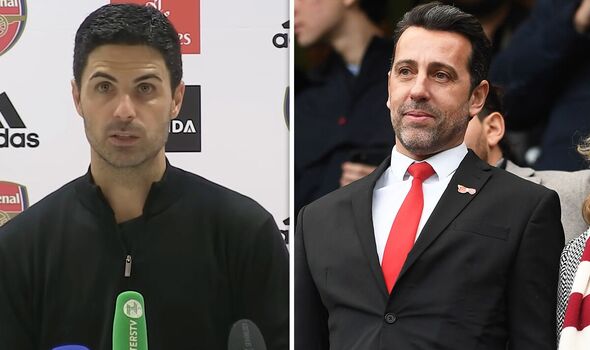 Arsenal boss Mikel Arteta has put pressure on Edu to deliver in the January transfer window. The Spaniard insists the Gunners must do all they can to strengthen the squad in the necessary areas.

Arsenal were held to a goalless draw by third-placed Newcastle on Tuesday. It was the first time they have failed to score in the Premier League this season and ended their 100 per cent record at the Emirates.

A brief glance at the Arsenal substitutes bench showed a real lack of senior attacking options for Arteta. Fabio Vieira, the £34million summer signing from Porto, did not come on despite the hosts pushing for a late winner.

Arteta wants to sign a winger in this window and is also open to bringing in a forward following the injury to Gabriel Jesus. Arteta and Edu have worked well together in the transfer market in recent seasons.

Mikel Arteta after the draw with Newcastle United

But speaking in his post-match press conference, he shifted responsibility onto his sporting director. Asked about the current window, Arteta said: “I don’t know, it’s a question for Edu and the board to respond.

“We are trying to improve the squad in every window. This is no different, we will do our best because we cannot waste any window with the squad numbers that we have so we shall try.”

Shakhtar Donetsk winger Mykhaylo Mudryk is Arsenal’s top target. The north London side have already made two bids for the Ukraine star.

Shakhtar are yet to respond to the second offer but it still falls way short of their public valuation of the 21-year-old. Arsenal are also interested in signing Joao Felix from Atletico Madrid.

Felix is available on loan for the remainder of the season but Chelsea are also among the clubs keen on him. Speaking to Sky Sports, Arteta insisted Arsenal must use January to its maximum.

He said: “That’s something we always try to improve our team. Every window is really important because we still have a lot of things to do with this team.”

Arsenal were unable to break down a resolute Newcastle team, who haven’t conceded a goal in their last six matches in all competitions. The Gunners moved to eight points clear of second-placed Manchester City, who play their game in hand against Chelsea at Stamford Bridge on Thursday.