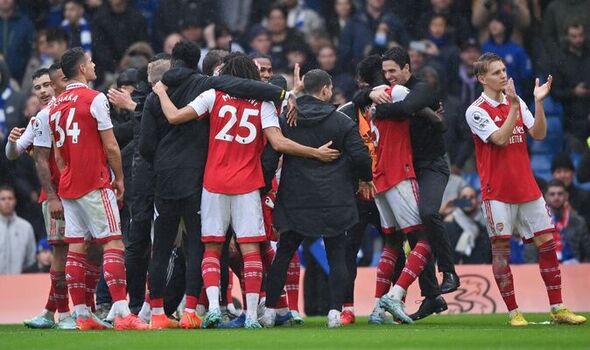 Arsenal boss Mikel Arteta has copied Aaron Ramsdale’s recent remarks about Manchester United following the Gunners’ impressive 1-0 win over Chelsea. Arsenal moved back to the top of the table with Gabriel grabbing the game’s only goal for their 11th win 13 Premier League games.

Their only league defeat came against Manchester United back in September and Arsenal have since gone on to pick up big wins over Tottenham, Liverpool and now Chelsea. Ramsdale said this week that it was “good every now and then to be reminded of things” in respect to that league defeat to United.

And Arteta agrees with his No 1 shot-stopper, indicating that proved to be a turning point for his Arsenal side. “We lacked the discipline in that game,” he said.

“I think we learned that lesson really well because we played really well but didn’t get the result.” Arsenal never appeared threatened throughout the match against Chelsea and Ramsdale had very little to do in goal.

That was largely due to the defensive work from Gabriel and William Saliba ahead of him, who were keeping Pierre-Emerick Aubameyang quiet throughout the match. Thomas Partey was cleaning things up in midfield as the likes of Kai Havertz and Ruben Loftus-Cheek failed to have any impact.

But it was further forward where Arsenal were getting much more joy than they would have expected. Martin Odegaard and Granit Xhaka often had too much time to be able to turn and pick a pass with Arsenal’s attackers causing Chelsea problems throughout.

Thiago Silva stood firm for the hosts and was arguably the sole reason Chelsea remained in the match until the end. Arsenal’s goal was a matter of when, not if, but it came in fortuitous circumstances after some calamitous defending from Chelsa.

Bukayo Saka’s corner was allowed to fly through the entire Chelsea box before Gabriel tapped in from a yard out. Home fans would have hoped that would kick their side into gear, but Chelsea never looked like threatening for an equaliser.

It was clear for all to see how much the win meant for Arteta as he jumped on his coaching staff as the final whistle was blown before going off to celebrate with his players in front of the travelling supporters for several minutes after the match.