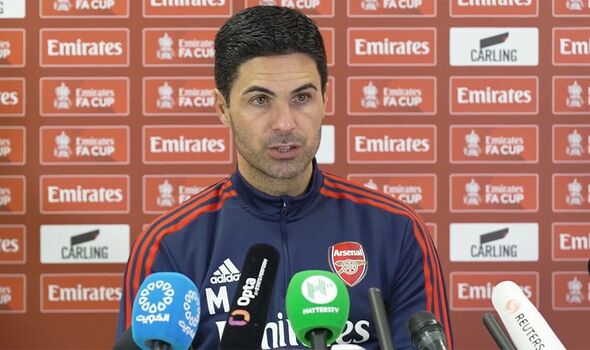 Arsenal manager Mikel Arteta has revealed he wants to sign a midfielder before the end of the January transfer window. The Spaniard admits he needs more cover amid concerns over the fitness of Mohamed Elneny.

Arsenal have made two signings so far this month. Leandro Trossard joined from Brighton for a fee that could rise to £27million, while Poland defender Jakub Kiwior has signed for an initial £17.5m.

However, midfield and right-back are two areas that the Gunners are also looking at strengthening. Spanish youngster Ivan Fresneda is the top target on the right side of defence, though he would likely rejoin Real Valladolid on loan for the remainder of the season if he did complete a move.

Brighton’s Moises Caicedo and Everton’s Andre Onana are two midfielders who have been linked with Arsenal, with Declan Rice the top target for the summer. Arteta says the signing of Kiwior was necessary to bolster his defensive resources.

But he admits he is open to doing more business before the deadline on January 31. Speaking at a press conference, Arteta said: “Well [Kiwior] gives us more cover.

Mikel Arteta calls the first half of the season ‘extraordinary’

“Obviously we’ve had three central defenders for the first part of the season, which is very, very short. We’ve been lucky with injuries, so we needed to recruit in that position.

“We’ve done it, Jakub can play in different roles and is a versatile player and is going to strengthen the team. If there is anything else available that can make us better, we will look at it.”

Arteta was later asked about the fitness of Elneny. The Egyptian picked up a knee injury in training ahead of the north London derby win at Tottenham earlier this month.

Elneny will not be fit for the FA Cup fourth-round tie against Manchester City on Friday. Arteta admits there is a concern over the severity of the injury.

He said: “There are concerns, especially because Mo is a player who never complains about anything. But let’s see.”

Arteta then made it clear that midfield is an area he wants to add to in the final week of the window. However, he is wary of the difficult market which he faces.

The Gunners boss said: “Well we need some more cover in midfield, ideally if we can. But obviously in this market it’s pretty complicated to do that.

“But as I always say, the most important thing is that we get the performances and the time on the pitch that we need with the players that we have available today, that are already really good.”