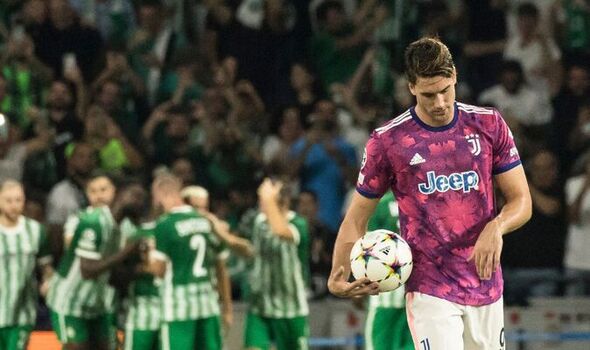 There is more hard-hitting evidence to accompany Arsenal’s current Premier League status – that sees them sit top of the pile after nine matches – when documenting the Gunners’ remarkable revival under highly-rated tactical mastermind Mikel Arteta. Back in January, forward-thinking technical director, Edu set the wheels in motion for a mega-money transfer swoop for prolific Fiorentina frontman Dusan Vlahovic, who was rapidly emerging as one of Europe’s finest young prospects in Serie A.

A number of prestigious clubs were queuing up for his signature and while several of them were able to hold dialogue with the striker’s people, Arsenal were stopped firmly in their tracks.

Allegedly, Vlahovic’s representatives were not interested in entertaining a move to Arsenal because of the lack of Champions League football in north London, so much so, that they did not even answer the phone. Furthermore, they did not feel the club’s project and rebuild was at the right stage for the Serbian international to justify making the jump.

From the outside, this was highly insulting from an Arsenal perspective, although they did not disclose a response – instead, they simply moved on to other alternative targets.

Arteta had already built a track record for developing young talent and making them a focal point in his exciting team. Bukayo Saka, Emile Smith-Rowe and Gabriel Martinelli were all flying under his tutelage after nailing down spots in the starting XI.

However, as the January window rumbled on, it soon became clear that Juventus were Vlahovic’s preferred destination of choice. A deal was later agreed between La Viola and the Old Lady for a fee worth in the region of £62.8million.

Vlahovic has since declared that he never snubbed Arsenal, suggesting he leaves his agents to handle his business.

He has since declared to The Telegraph in response to the Gunners’ interest: “Maybe my agent knows [about Arsenal’s offer] but I never talked to anyone about it.

“I just had one club in my mind because Juventus is Juventus. There is nothing else to say. And now I feel honoured to be given this jersey. It’s incredible every time I put it on.

“I definitely identify with their DNA. The Juventus personality coincides with my personality. When you come here you never give up, you fight all the time, you make the sacrifices. This was definitely what I was looking for.”

While Vlahovic is keen to clear his name in regards to snubbing Arsenal, it’s obvious they did not tickle his fancy. But nine months down the line, he has already been made to look somewhat foolish.

On Tuesday night, Juventus were beaten 2-0 by Israeli outfit Maccabi Haifa – a result that leaves them staring elimination from the Champions League in the face.

It was undeniably one of the worst results in Juve history and it leaves them in third place in Group H having lost three of their four matches. Still, they will not sack Massimiliano Allegri due to the expensive pay-off he would be due, should the club pull the trigger.

Given that Vlahovic effectively chose Juventus to play Champions League football, this has been nothing short of disastrous for the 22-year-old. He may just be wishing he’d listened to Arsenal’s proposal – despite playing none the wiser.

Juve are currently eighth in Serie A and currently on the road to nowhere. The Scudetto has already seemingly gone and they already face an uphill struggle to get back on track in the race for the top four.

There is a feel-good factor pumping around the red-and-white half of north London, one that Vlahovic would surely like to be a part of when compared with the toxic atmosphere in Turin.

Gabriel Jesus, the man Arsenal turned to instead of Vlahovic, has also been a huge hit. He has been the club’s best recruit since the days of Alexis Sanchez and Mesut Ozil.

The selfless Brazilian was the perfect fit for Arteta and has already found the net five times in nine Premier League outings, elevating Arsenal’s attack to a whole new level.

That could have been Vlahovic. Yet he turned his nose up at the idea of joining the Gunners and now he is being forced to accept the consequences as Juventus fight to turn their season around. It’s another major victory for both Edu and Arteta.