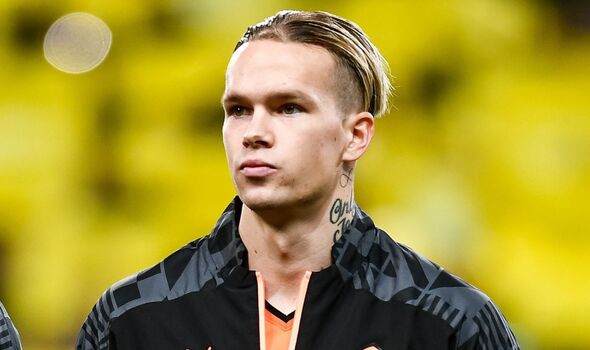 Arsenal have been left to lick their wounds after Chelsea flew club delegates to Turkey to swiftly close a blockbuster transfer hijack for top January target Mykhaylo Mudryk as Todd Boehly’s excessive Stamford Bridge splurge took another inexplicable twist. The Blues have been working on a potential deal for the highly-rated attacker behind the scenes in recent weeks after initially laying the broad foundations with Shakhtar Donetsk during face-to-face discussions in London when director of football Darijo Srna flew to England for direct talks before watching Chelsea’s 1-0 defeat to Manchester City at Stamford Bridge.

But despite legitimate Chelsea interest, Arsenal have always been considered the frontrunners to shake hands with the Ukrainian champions and there was never any serious suggestion that the Blues could move from the shadows to blow their London rivals out of the water.

Chelsea were seemingly only poised to move for Mudryk if negotiations between Arsenal and Shakhtar became complicated or collapsed as the player himself had made it abundantly clear on countless occasions that he wanted to join Mikel Arteta’s side, not least by his social media activity on Instagram.

As recently as Thursday, the 22-year-old winger, who had already agreed personal terms with the Gunners, posted a blank screen accompanied with the praying hands emoji after Arsenal upped their offer with a third official bid after two previous approaches were knocked back by Shakhtar.

Yet following a sensational swing of the pendulum Mudryk is said to have swiftly boarded a flight to England on Saturday afternoon after a deal was agreed between Shakhtar president Rinat Akhmetov and Chelsea co-owner Behdad Eghbali.

But while he is set to fulfil his dream of playing in the Premier League, Mudryk is now facing a sense of personal embarrassment after publicly and borderline desperately vying for a move to north London.

While it is fair to say the sequence of events is no fault of his own due to Shakhtar’s stubborn negotiating stance, Arsenal were simply not prepared to pay the kind of money – described to Express Sport by sources as “huge” – Chelsea sporadically placed on the table to close a deal (thought to be in excess of £88million including adding).

Instead, they had always approached negotiations with caution in an attempt to agree what they would consider to be a fair deal reflective of their appreciation of the winger, his potential and the notion that he is still relatively unproven having not played outside of Ukraine.

Arsenal are now prepared to explore other targets but they will not act frantically despite the undeniable need for reinforcements as they look to sustain a genuine Premier League title challenge following an impressive first half of the campaign.

Express Sport understands the Gunners were in fact comfortable with walking away from club-to-club negotiations – due to the size of Chelsea’s offer – despite their obvious desire to strike a deal with Shakhtar.

Sources suggest Arsenal will invest in players at the right price and for the long-term benefit of the club – the club remains prepared if there’s an opportunity they consider worth pursuing.

Earlier this week, progress had been made between both parties after Shakhtar finally started to show an openness to negotiating potential payment plans and the structure of the deal – including add-ons and overall make-up of the package.

Interestingly, Ukrainian sources with knowledge of the trajectory of negotiations indicated to Express Sport that the two clubs were close to agreeing a fee, although there were still other formalities (RE structure and payments) to be ironed out before Mudryk was headed for London.

It was even put to Express Sport on Monday that a deal could be agreed between Arsenal and Shakhtar by the end of the week. Instead, Chelsea have satisfied Shakhtar’s financial demands to snatch the ultimate prize from the Gunners’ clutches.

A winger remains the priority for Arsenal but Edu and Arteta are also thought to be open to strengthening in midfield. Plans for a left-sided centre-back are expected to be shelved until the summer.

Arsenal had tracked Pedro Neto of Wolves closely in August but decided against a formal approach after being told the Portuguese international was valued at £50m.

Yeremy Pino of Villarreal and Bayer Leverkusen’s Moussa Diaby remain two players of intrigue to the Arsenal hierarchy, although other targets are also now expected to fall under consideration in the second half of the January transfer window.

The Gunners held strong interest in Raphinha last summer before his move to Barcelona after submitting two bids that were knocked back by Leeds. There is some indication now in Spain that he could potentially be available following a difficult start to life under Xavi.