Arsenal defender William Saliba wants to stay in England if he leaves the Gunners on loan in January, according to reports. Saliba is yet to play a single minute for Arsenal since his £27million move from Saint-Etienne in 2019.

Saliba spent last season back on loan at Saint-Etienne to give him regular first-team action.

However, injury problems and then the French league being cancelled due to the coronavirus pandemic prevented the teenager from featuring as much as he and Mikel Arteta would have wanted.

Saliba came close to rejoining Saint-Etienne on loan in the summer but the deal fell through at the final hurdle.

He was left out of Arsenal’s Europa League squad this season, a decision Arteta said he later regretted. 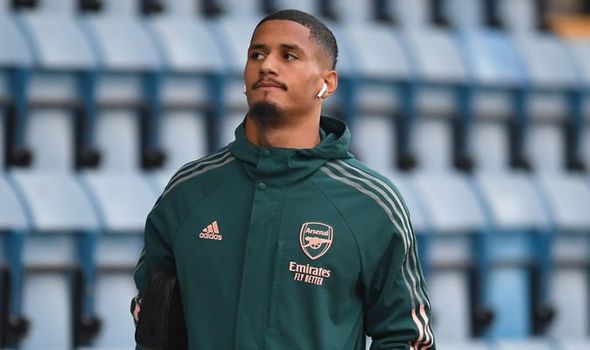 And he is yet to feature in a single squad in either the Premier League or Carabao Cup.

Saliba has been linked with a move away from the Emirates in recent days.

And The Athletic report the Frenchman would prefer to stay in England if he does take another temporary transfer.

There is also interest from France if a UK-based move fails to materialise. Saliba has found himself well down the pecking order under Arteta since he returned to Arsenal in the summer.

Gabriel Magalhaes, Rob Holding, David Luiz and Shkodran Mustafi are all ahead of the 19-year-old.

Pablo Mari has also recently returned from injury and appeared in two Europa League matches, as has Calum Chambers.

Speaking in November, Arteta revealed how he was annoyed by Saliba’s situation after his return to Saint-Etienne broke down.

“I’m fed up with the situation because, as you could see, we tried to find a way in the last few days to give him some football,” Arteta said.

“At the moment, with the amount of central defenders we have in the team, we had to leave him out of the squad, which is painful. Now we have some injuries and we could have used him but this is part of the profession.”