Arsenal appear to have revealed that Bukayo Saka will wear the No 7 shirt next season. Saka has enjoyed a breakthrough campaign at the Emirates Stadium while donning No 77 on the back of his top. The 18-year-old has contributed four goals and 11 assists across all competitions in 39 appearances.

Saka has established himself as a regular fixture in Mikel Arteta’s XI and shown his versatility by playing in a number of positions.

Arsenal fans spotted that next season’s jersey with ‘Saka 7’ on the back can be purchased from the club’s online shop.

And supporters appeared to give the switch their approval after a brilliant campaign for the youngster.

“Fair enough, honestly, he’s been outstanding this season,” wrote one fan on Reddit. 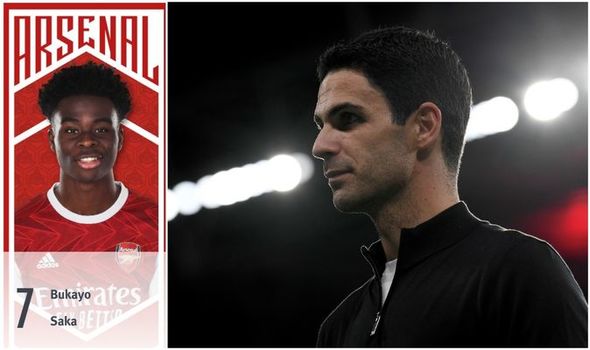 While a fifth wrote: “Hope he can become our own talismanic 7!”

Saka’s long-term future was the subject of intense discussion as he approached the final year of his deal with Arsenal.

The London-born ace put the speculation to bed, however, when he signed a contract extension earlier this month.

Saka said: “I just want to say that I’m sorry it’s taken this long, you know. I’ve seen how much it means to the fans.

“Over this time I’ve seen how passionate they are, how loving they are and it just means everything to me that I can make them happy. I just hope I can continue to do that.”

Arteta added: Bukayo is a talented and intelligent young player. He has impressed me with his work ethic and attitude to learn and adapt, and it has paid off in his performances. I am excited to continue working with him to develop him further, and for him to help us achieve our goals.”