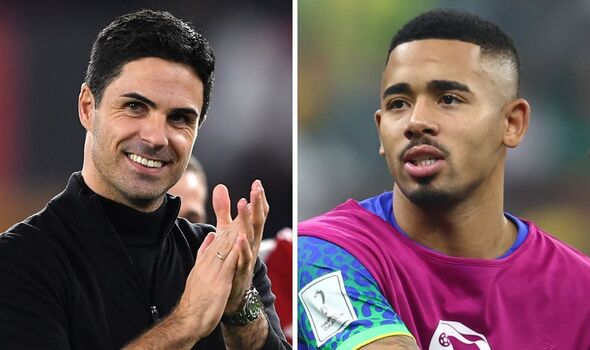 Gabriel Jesus’ injury has left Mikel Arteta short of options in attack, but Arsenal have been given a bargain £10.4million opportunity to sign World Cup star Marcus Thuram. Arsenal get their season back up and running on Boxing Day when they host West Ham as they look to keep their grips on the top of the table.

But Arteta will have to do so without Jesus, who suffered an injury during the World Cup with Brazil. The striker underwent surgery on his right knee earlier this month and reports have suggested he could be out until the end of February.

Arteta has already stated that Eddie Nketiah will be entrusted with taking Jesus’ spot in the starting line-up. But while Arteta remains a huge fan of the Englishman, it leaves Arteta light of alternative options should he need to switch things up.

Gabriel Martinelli could potentially be moved into the middle, but that would then disrupt the system Arteta has already built at the Emirates this season. A central striker is a target for the January window and Arteta has made it clear that he expects to be backed in the market.

Thuram has been touted as a possible option for Arteta and it appears as though Borussia Monchengladbach are prepared to cut a bargain deal. According to Bild, the Bundesliga side are prepared to let the striker leave in January with his contract set to expire in the summer.

It’s being reported that Thuram will be allowed to leave for as little as £10.4m, despite being one of the most lethal strikers in German football this season. Thuram has scored 13 goals and provided four assists in just 17 games already this season.

His performances earned him a spot in France’s World Cup squad and he provided the assist for Kylian Mbappe’s equaliser in Sunday’s final against Argentina. While France ended up on the losing side, Thuram is one of many players in the French squad who can leave with their head held high.

He’s likely to be given an extended break before returning to Monchengladbach, but Arsenal may have an opportunity to swoop in and bring him to the Emirates. At 25 years of age, Thuram fits the criteria for Arsenal in the transfer market in looking for players still yet to hit their prime years.

Bayern Munich are also said to be interested in the Frenchman, but Arsenal could beat them to the punch with an early January bid.