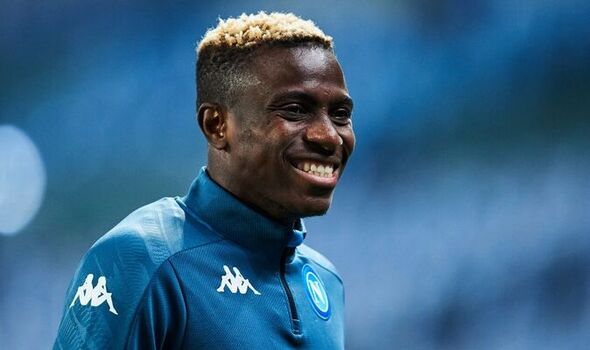 Arsenal may need to sell some of their deadwood in order to fund a deal for £84million-rated Victor Osimhen but the key to any move could be right before their very eyes. When the Gunners signed Nicolas Pepe from Lille for £72m in the summer of 2019 under Unai Emery, they were one of four clubs in the race for the highly-rated Ivorian, who had set Ligue 1 alight.

Arsenal, Napoli, Inter Milan and Liverpool were the four clubs in contention for the forward but it was the north London club that would prevail – despite Napoli matching their offer.

The club’s president Aurelio De Laurentiis revealed shortly after Pepe’s move that wages were the decisive factor, as the winger and his reps picked the Emirates Stadium.

“I made a large offer for Pepe, but we were unable to get him. Arsenal have five times the revenue of Napoli, so they will have simply offered him more money,” he said. “Never mind, we’ll find another Pepe.”

Napoli would find another Pepe in Osimhen, who coincidentally, was the player Lille brought in to replace the Arsenal-bound attacker.

The Nigerian would fire 18 goals in 38 outings in his debut season in France before earning a blockbuster £51m move to Napoli.

But now Arsenal, Manchester United and even Newcastle are willing to take the striker off their hands but Pepe could prove to be the perfect makeweight for the Gunners, in their quest to reduce the cost of any deal.

It’s clear that Pepe has admirers at Napoli, who worked so hard to sign him and sending him to Italy could really bolster their chances of landing their forward target Osimhen.

Pepe is short of confidence after another season in the dark at Arsenal and he could now leave the club after three seasons in north London.

His value has evidently plummeted due to his lack of game time and rhythm but there is still world-class potential waiting to be unlocked.

We have seen it in small glimpses throughout his Arsenal career but Pepe has really lacked consistency.

Napoli though has always been a great place for attacking players to hone their skills in recent years given the number of goals the team score.

Lorenzo Insigne will also leave a huge void behind that will need filling when he joins Toronto this summer.

By landing Pepe in a deal for Osimhen, Napoli will be ensuring there is no major drop-off in quality when losing their talismanic centre-forward.

For Arsenal, this is a deal that makes sense on just about every level given it’s now clear things aren’t going to work out for Pepe at the club.

With his value now thought to be worth in the region of £25m-£30m – Arsenal are bracing themselves for a major financial loss.

For that reason, it’s an absolute no-brainer to try and shift him as part of the deal for Osimhen and given Napoli’s previous interest – there is every chance they may oblige.