Arsenal head coach Mikel Arteta has admitted his side are a “long way” from achieving the level of performance he is targeting.

Arteta replaced Unai Emery at the Emirates last December and was credited with improving several elements of Arsenal’s play as he guided the club to an FA Cup triumph, as well as an impressive Premier League victory over champions Liverpool.

However, an inconsistent start to the new campaign – including a 3-0 home defeat to Aston Villa in the last game before the international break which left Arsenal 11th in the table – has dented some of the optimism surrounding the club.

“It’s part of a process. The results have to be immediate, and the challenge we have with the club we are representing is that we have to win as quickly as possible every game in every competition.

“So far we have played 14 games in all competitions this season, we won 10 and lost four and the four of them have been in the Premier League, so it is a little bit imbalanced.”

The north London club underwent significant upheaval on and off the pitch over the summer as 55 staff were made redundant, with the financial impact of the coronavirus cited. On the field, Thomas Partey and Gabriel Magalhaes were notable additions to Arteta’s playing squad.

Despite the gloom with which Arsenal entered the international break, before the loss to Villa there had been a rare win over Manchester United at Old Trafford, with a gritty performance earning a 1-0 victory. 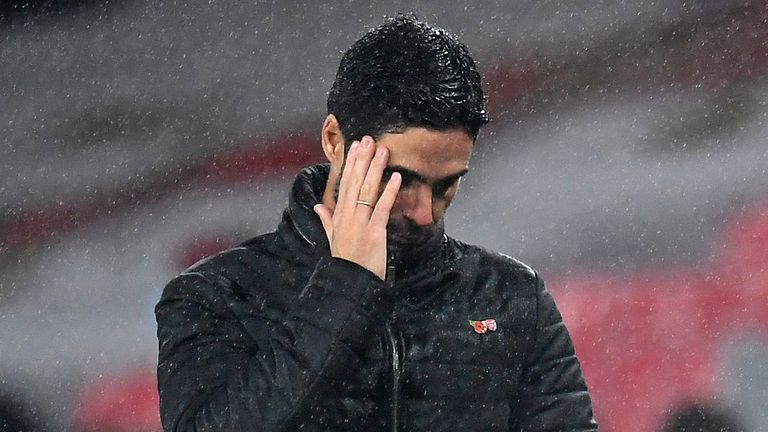 Arsenal return to Premier League action at newly promoted Leeds on Sunday, live on Sky Sports, and Arteta says he is firmly focused on what he sees as a “really bright” future.

“There are a lot of things to do, short term and medium term, we have seen a lot of changes not only on the pitch but structurally as a club as well,” he said.

“It has been difficult, it has been a challenging time in the last three or four months, a lot of things have happened.

“We have to settle and everyone has to realise where we are now, but I see the future as really bright. I am a really positive person and I tend to learn much more when things don’t go well and we have a defeat like we had the other day that really hurt after the performance we had at Old Trafford.

“We have to understand why it happened, be really critical first of all with myself and try to understand the players better and give them more solutions to win more football matches.”