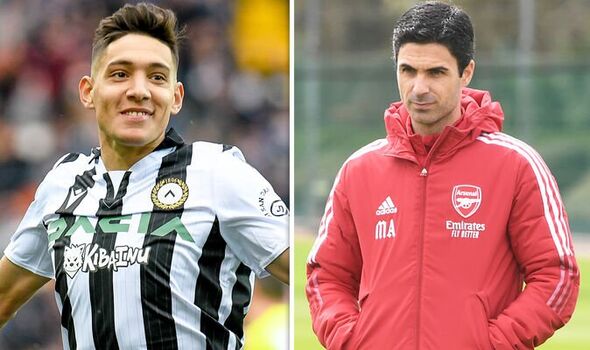 Arsenal are reportedly leading the race to sign Udinese right-back Nahuel Molina. The Argentina international could be one of five signings Mikel Arteta makes in the close season.

Arsenal are already set to sign Brazilian youngster Marquinhos in a deal worth around £2.5million. They are also keen on Manchester City’s Gabriel Jesus and Bologna left-back Aaron Hickey.

Leicester’s Youri Tielemans is one of the top targets for a midfield signing. And Molina makes up the fifth position Arteta is looking to strengthen in.

CalcioMercato claims Arsenal are keen on signing Molina and including Pablo Mari as part of the deal. Mari has spent the second half of this season on loan at the Serie A club.

Juventus and Atletico Madrid are also credited with interest in the player. Juve were reportedly put off by the £25million price tag Udinese put on the player.

And Football Italia claims it is Arsenal who are currently ahead in the race for the 24-year-old’s signature. The report says Molina is destined for a move to a top club this summer following a fine season for his team.

Molina has played the majority of this season as a right wing-back, a position Arteta rarely uses at Arsenal. However, he would provide an attacking alternative to Takehiro Tomiyasu, who has impressed in his debut season in the Premier League.

Cedric Soares has featured regularly in recent months but Arsenal need to upgrade on the Portugal international, who has struggled of late. Cedric has been linked with a move away from Arsenal, although he would prefer to stay at the club with his contract not expiring for another two years.

He initially joined Arsenal on loan in January 2020, the same month Mari moved to the club from Brazilian side Flamengo. Both players signed four-year permanent deals the following summer but neither have been a firm part of Arteta’s plans when everyone has been fit and available.

Arsenal therefore will be hoping that can sweeten negotiations in a move for Molina, who could just be one of several signings the Gunners make in the close season.