Arsenal have been offered a loan swoop for PSG goalkeeper Alphonse Areola. Mikel Arteta might require an emergency replacement for Emiliano Martinez, who could join Aston Villa amid concerns over a guaranteed starting role at the Emirates Stadium.

Arsenal’s situation between the sticks was complicated by Bernd Leno’s knee injury after the Premier League restart, which allowed Martinez the chance to prove his worth.

The 28-year-old, who has just two seasons left to run on his contract, delivered a string of impressive performances as the Gunners finished the campaign as one of the most in-form teams and won the FA Cup.

Leno is back to fitness, however, and expects to be restored between the sticks, although Martinez got the nod for the Community Shield penalty shoot-out win over Liverpool.

Villa Park chiefs hope to take advantage of the situation by signing Martinez as Tom Heaton will miss the start of the season through injury. 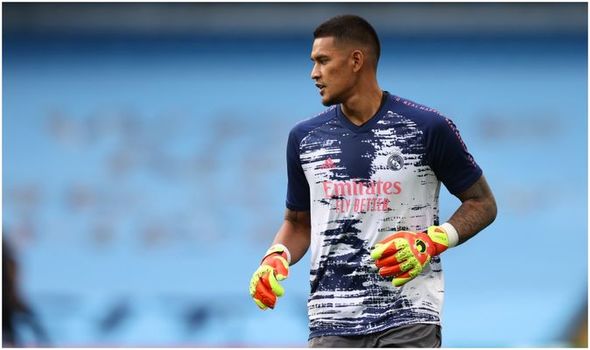 Areola could be a quick fix if Arsenal require a goalkeeper but transfer rivals are circling for the 27-year-old, who was a member of France’s 2018 World Cup-winning squad.

Rennes are looking at Areola if their current No 1 Edouard Mendy seals a transfer to Chelsea.

While Fulham, who Arsenal face in the first game of the new Premier League season, are also interested.

The Championship play-off winners need competition for Marek Rodak, with Marcus Bettinelli heading to Middlesbrough on loan and Fabri wanted by Goztepe SK.

Areola is up for a move to the Premier League having already bought a house in London.

The Paris-born stopper came through PSG’s ranks before making his first-team debut in 2013.

He had spells on loan at Lens, Bastia and Villarreal before a few seasons as the club’s No 1.

Areola spent last season on loan at Real Madrid as part of a deal that saw Keylor Navas head in the opposite direction.