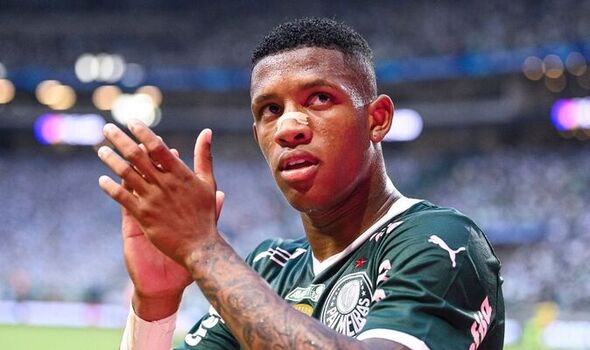 Arsenal will consider a January swoop for 21-year-old Palmeiras midfielder Danilo when the winter market opens in 2023 with technical director Edu ready to back his head coach Mikel Arteta with further signings. The Gunners currently sit top of the pile in the Premier League but there’s an appreciation that more depth could be required in order to ensure Arsenal remain capable of maintaining their surprise – yet impressive – title challenge, particularly later in the season.

It’s no secret that Arteta was open to the signing of another midfielder in the latter stages of the summer transfer window having launched three deadline-day bids – all of which were rejected out of hand – for Aston Villa’s Douglas Luiz.

Steven Gerrard, who has since been sacked and replaced by Unai Emery, was adamant the Brazilian would not be sold following deep consultation with the Villa Park hierarchy – even though the player was open to the switch to north London.

However, former Manchester City ace Luiz has since penned a long-term contract extension in the Midlands where he is seemingly settled alongside his partner Alisha Lehmann, who plays for Villa Women.

There had initially been optimism a deal could be revived in January, when Luiz’s value would have plummeted due to his previous expiring contract (2023).

But the unexpected swing of the pendulum means that Arsenal will now have to explore alternative targets with Danilo firmly on the agenda as club scouts continue to monitor his progress in Brazil.

The Gunners, who reportedly watched him in the recent 3-1 victory over Athletico Paranaense, have long-standing interest in the youngster and were said to be willing to bid for his services way back in January before speculation intensified once again in August.

Palmeiras president Leila Pereira had remained insistent that the player would not be leaving the club this summer and was true to his word, telling Torcedores in late September: “Regarding Danilo: I said he wasn’t going to leave and he didn’t. I’ll tell you; players of this size, important in the history of Palmeiras, I don’t make decisions alone.

“I always consult our coach, coaching staff. If my coach says he can’t lose the player under any circumstances, he doesn’t leave.”

The Brazilian outfit are determined to hold onto one of their most-prized assets with the view that his value could explode in the coming months before eventually earning them a bumper payday.

Arsenal’s interest in Danilo remains strong and they are expected to launch a move in due course, although there is a chance a transfer could be shelved until the end of the season when they will boast more financial leverage.

The defensive midfield anchor has played 30 matches in Serie A (Brazilian top-flight) this season with Palmeiras now on the cusp of winning the title.

Three points against Fortaleza in their next match would do the trick, eight months after losing 2-1 to Chelsea in the final of the Club World Cup in February.

Palmeiras’ season finished just before the World Cup, which would provide Arsenal with an extra incentive to pursue a January transfer should they wish to firm up their interest in Danilo.

Arsenal are not expected to be overly active in the market but a winger is also on Edu’s checklist having failed to land a suitable target in the final stretches of the summer transfer window.

The Gunners would like some additional cover for Thomas Partey and Granit Xhaka at the base of midfield with Albert Sambi Lokonga still struggling to get to grips with the tactical demands of English football.

The Belgian international has been campaigning for more minutes but has struggled to make any form of statement in the Europa League, despite starting all five of Arsenal’s Group A matches.

Last week, he was subbed off in Eindhoven following an underwhelming personal display after PSV doubled their lead over the Premier League leaders.