Arsenal are ready to firm up their interest in Real Madrid’s Luka Jovic but could be beaten to a deal by former chief executive Ivan Gazidis. Arsenal could be forced to search for a new striker in the summer transfer window amid concerns over the futures of Pierre-Emerick Aubameyang and Alexandre Lacazette.

Aubameyang is about to enter the final year of his contract so Emirates Stadium bigwigs could cash in to avoid losing the 30-year-old on a free transfer next summer.

Lacazette could also be on the move after a mixed campaign that has seen him net seven goals in 20 Premier League appearances. Atletico Madrid are interested and he could be swapped for Thomas Partey.

Arsenal have been linked with a move for Jovic, who has endured a nightmare at the Bernabeu following a €60million transfer from Eintracht Frankfurt, scoring twice in 24 games.

He has five years left to run on his contract but could be moved on when the transfer window reopens. 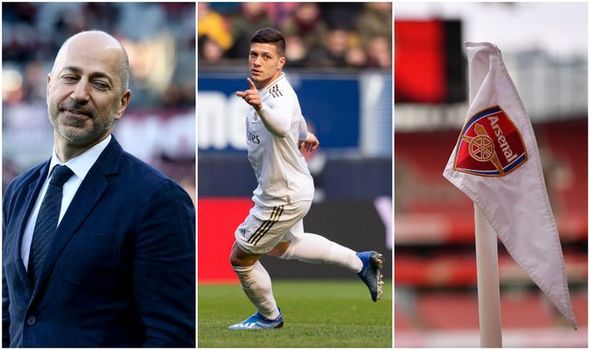 According to Pianeta Milan, Arsenal are ready to offer Jovic a contract worth £170,000-a-week including bonuses to quit Madrid for London.

The Serbia international is reportedly reluctant to commit to the Gunners, however, because he is holding out for a move to AC Milan.

The Serie A outfit are looking to sign Jovic, with Gazidis – the club’s CEO – drawing up a two-year loan deal with a permanent option.

The 22-year-old made his name in Germany with Frankfurt, scoring 27 goals in 48 appearances across all competitions last season to help the team to the Europa League semi-finals.

“Well, does he fit in with what they do? I don’t think so,” Campbell told AFTV.

“I do a lot of Spanish football, I watch it, and I just don’t think [so]. Zinedine [Zidane] doesn’t fancy him.

“At Arsenal, there’s an imbalance there.”